Geology is in the eye of the beholder 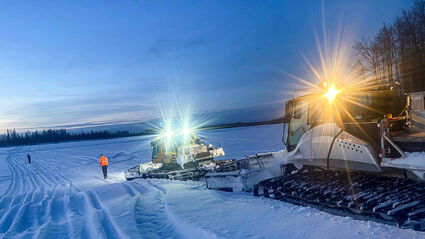 Winter roads across the frozen landscape offer mining and mineral exploration companies a relatively low-cost means of delivering equipment and supplies to many of the mineral-rich projects in remote parts of Alaska and northern Canada.

The American Southwest is the best place in the world to find, permit, and build a mine, according to the mining executives that responded to the Fraser Institute's Annual Survey of Mining Companies, 2020.

Nevada, which is a perennial top-5 contender when it comes to "investment attractiveness", reclaimed the top spot from Western Australia in the latest edition of the Fraser mining survey. Arizona moved up from seven places to claim the No. 2 position in this category.

"Nevada continues to be a premier mining jurisdiction," said the president of a mining company that produces more than US$50 million per year.

To rank the investment attractiveness of global mining jurisdictions, the Fraser Institute asks industry professionals from around the globe to score the regions they are familiar with based on mineral endowment and a wide range of government policy topics important to mining. The investment attractiveness metric of the survey is a compilation of respondent's views on both geology and policy.

While mining executives' perception of any given jurisdiction's geology may change from year to year, the actual mineral endowment only alters in geological time. What is more fundamental is the government policies surrounding the exploration, development, and extraction of those minerals. Interestingly, opinions on policies tends to sway the views of the geology.

For example, the perceptions of both policy and geology climbed in both Arizona and Nevada last year.

"Policymakers in every province and territory should understand that mineral deposits alone are not enough to attract precious investment dollars," Aliakbari added.

Except for Alaska, a dour view of mining policies dragged on the investment attractiveness of the five jurisdictions covered by North of 60 Mining News.

When it comes to attracting mining and mineral exploration investment, British Columbia climbed to 17th; Yukon rebounded five positions to 18th; Nunavut fell another 13 spots to 39th; and Northwest Territories lost another 11 positions to land at 46th.

When it comes to perceptions of policies, mining executives continue to have more favorable views of Alaska and less regard for its North of 60 neighbors.

On the Policy Perception Index of the 2020 Fraser mining survey, Alaska was ranked 13th out of the 77 global jurisdictions considered. This is up four positions from 2019 and a vast improvement over the 26th ranking in 2018.

Infrastructure, or more accurately the lack thereof, continues to be the largest hurdle that drags down the policy-related perceptions of Alaska and the Canadian territories.

When asked about the quality of infrastructure, mining executives ranked Nunavut 75th – only Greenland (76th) and Venezuela (77th) received a worse grade.

Fraser Survey respondents did not have a much better view of Northwest Territories' infrastructure (70th); Yukon's (60th); or Alaska's (53rd).

British Columbia, at 35th, ranks better than its northern neighbors in terms of infrastructure.

BC, however, received a Third World ranking when it comes to "uncertainty concerning disputed land claims."

In this category, Canada's westernmost province was ranked 73rd – between Papua New Guinea and Guinea.

"Rules around First Nation consulting are unclear and encourage delays in the permit approval process," a mineral exploration manager penned in response to BC mining policy.

Yukon did not fair much better on the topic of disputed land claims, coming in at 70th.

Northwest Territories (67th); Nunavut (54th); and Alaska (24th) round out the perceptions of disputed land claims across North of 60 Mining News jurisdictions.

Improved infrastructure, settled land claims, and predictable permitting regimes are the roads that will lead to more favorable policy perceptions for Alaska, BC, and the Canadian territories.

While North of 60 Mining News' jurisdictions have much room for improvement when it comes to infrastructure and mining policies, there is no question about the rich mineral endowment of these frontier lands. Policy perceptions, however, seem to result in tectonic shifts in geological opinions.

In its annual survey, the Fraser Institute asks mining executives to set aside any policy considerations and provide their views of the pure geological endowment of the 77 global mining jurisdictions ranked on the latest survey.

Alaska perennially ranks highly on this part of the survey, dubbed the Best Practices Mineral Potential Index, and 2020 was no different. Respondents to the Fraser Survey ranked Alaska as 5th richest mineral province on Earth, behind Arizona (1st); Nevada (2nd); Turkey (3rd); and Saskatchewan (4th). 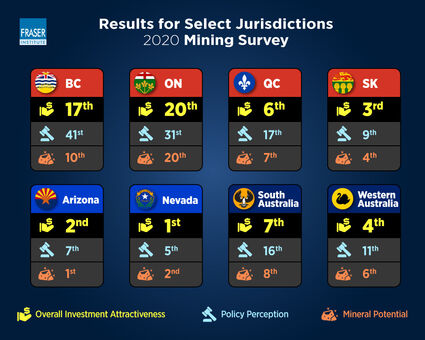 Interestingly, Northwest Territories was ranked 4th and Nunavut was 5th just two years ago. While the geology has not changed over that short span, mining executives' views of it have. While Fraser Institute asks mining survey respondents to set aside policy views when ranking mineral endowment, the tectonic shift in opinions of these northern territories' mineral potential corresponds with less favorable views of mining policy.

"A sound and predictable regulatory regime coupled with competitive fiscal policies help make a jurisdiction attractive in the eyes of mining investors," said Jairo Yunis, a Fraser Institute policy analyst and co-author of the Annual Survey of Mining Companies, 2020.