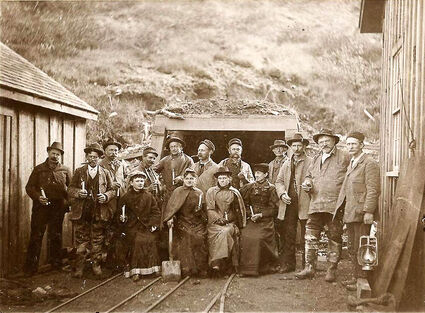 Tourists preparing to go underground at the Apollo Mine on Unga Island, Alaska, circa 1890.

After the United States' purchase of Alaska, and before the boom brought on by the Klondike Gold Rush, a small island just off the Alaska Peninsula would have gold-bearing quartz discovered, inevitably booming a small trade hub known as Delarov, or as it came to be known, Unga.

As it stretches like a broken bridge from the continent of North America to the continent of Asia, many forget the large chain of islands that occupies an area of 6,821 square miles and extends nearly 1,200 miles westward from the Alaska Peninsula to the Kamchatka Peninsula in Russia, is in fact inhabited and even a part of the great northern state.

The Alaska Peninsula and 167 named Aleutian Islands, extending more than 1,000 miles off Southwest Alaska form a border between the Pacific Ocean and the Bering Sea. This geologically young island arc is part of the Pacific Ring of Fire, a tectonically active and mineral-rich belt that runs from the southern tip of South America north to Alaska and along the Aleutian Islands before extending south to New Zealand.

Roughly 8,162 people (per the 2000 census) live along Alaska's Aleutian Island arc, yet before the time of its discovery by Russian explorers in the mid-18th century, the population is estimated to have been over 25,000.

In 1741, it was the Russian government that sent Vitus Bering, a Dane in the service of Russia, and Aleksei Chirikov, on two ships, Saint Peter and Saint Paul, to explore the Northern Pacific.

Bering, who became shipwrecked and eventually died in the Komandorski (Commander) Islands, with one of them eventually taking his name, Bering Island (of which the Bering Sea is also named), the survivors of his crew constructed a new craft from the wreckage and reported the islands were rich in fur-bearing animals.

The Aleutian Islands then consequently "belonged" to Russia, until the country transferred all its possessions in North America to the U.S. in 1867.

The town of Unga itself, however, was first settled by Aleuts in 1833 but was originally named Delarov, after trader Evstratii Ivanovich Delarov, with a population of 116 people.

A post office was built 50 years later and then a company that would forever change the fate of Unga would arrive in 1890, known as the Apollo Consolidated Mining Co.

Located roughly two miles from present-day Sand Point, the island which Unga was built upon is only 15 miles wide.

And while Unga would survive both World Wars and even after mining had shut down in 1922, the post office would not close until 1958 and by 1969, the last family would leave to nearby Sand Point.

Before Russia came to claim Aleut lands as their own, it was not gold, but the bounty from the sea, that drew the indigenous people to the chillingly beautiful chain of islands.

To survive for more than nine millennia in the rugged environment required the Aleut people to have the best clothing, dwellings, transportation, and food. The ability to make highly effective clothing, boats, and other essentials out of the seemingly limited materials the Aleutian region has to offer speaks to the ingenuity, resourcefulness, and skills of the Aleut people.

While made of different materials, modern kayaks and top-end raingear borrow from the designs Aleut people have been using for ages.

Kamleikas, "rain gear," was what Aleut women made from the intestines of sea mammals, which allowed hunters to stay warm and dry while harvesting sea lions, whales, salmon, halibut, cod, crab and shrimp, that is the foundation of the Aleut diet.

To travel for days out in the rough seas that the Aleutians are notorious for, Aleut hunters used baidarka – highly maneuverable boats that are considered the inspiration for modern kayaks.

Aleut women were also expert and artful grass weavers that could weave baskets so tight that they could hold water. In addition to their baskets, these craftswomen wove mitts, shoes, sleep mats, and wall dividers.

While the conveniences of modern living exist among today's Aleut people, the traditions, culture, and values that served their ancestors living on the Aleutian Islands for at least 9,000 years continue to be passed down to current generations, and hopefully onto future ones.

In a 1914 book titled "Alaska, its meaning to the world, its resources, its opportunities," historian Charles Richard Tuttle wrote, "From available data, it may be stated that the earliest discoveries were quartz lodes, not placers. The Apollo Mine on Unga Island, off the western shores of Alaska, probably was the first of these discoveries."

Prospectors initially explored interior Alaska regions such as Fortymile and Circle before the Klondike Gold Rush but important coastal discoveries such as Unga also resulted in small gold rushes and gold production.

It was one such discovery in the Aleut region that sparked a pivotal and oft-overlooked chapter of Alaska's mining history – which according to Tuttle is Apollo, the first hard rock gold mine in America's Last Frontier.

With reports varying the discovery date as 1889 or 1891, either way, the property was comprised of 15 patented lode claims and 1 patented mill claim that was in peak output between 1891 and 1904.

During the early years, the output had become so fruitful that a company called Apollo Consolidated Mining Co. determined to build a railroad, which they did in 1893.

A mineral survey in July of 1893 showed a "railroad to landing" running down Salmon Creek toward Delarof Harbor. Also shown was a "railroad to mill", which appeared to have a smaller gauge ore cart track.

The Apollo and Sitka mines were less than a mile from tidewater at Delarof Harbor, but the back part of the harbor is very shallow, which was a poor location for a port.

Historical sources mention the town of Unga as the rail terminus, but it is speculated that it referred to a planned connection that was never finished. Most sources agree that the mine's wharf and railway terminus were at the head of Delarof Harbor and only accessible at high tide.

According to records by Baldwin Locomotive Works, a train was built for Miller, Sloss & Scott, a San Francisco steel and hardware dealer in 1897.

The specification sheet notes that the locomotive was destined for Alaska and was named "Apollo".

With the newly dubbed Apollo train at the Apollo mine, it can be inferred that the historical name of the Apollo mine derives from this very same company, and according to the USGS, the nearby Apollo mountain derives its name from the mine – yet no information could be found confirming the direct naming of the historic mine.

So, between the years of 1891 and 1917, Apollo Consolidated operated a narrow-gauge railroad that was no more than three miles long on Unga Island, with the railroad being a small 30" gauge, it is even speculated that miners possibly used horses before the purchase of the train from Baldwin.

For context, the train would look very much like a train ride you would see for children at a carnival or fairground.

While this line is sometimes referred to as the "westernmost railroad in Alaska", there were actually several nearby railroads and trams contending for this title.

Ultimately, these small but fascinating railroads demonstrate the pioneering spirit and ingenuity required to build and operate infrastructure in a remote and rugged environment.

While Apollo Consolidated was successful with its railroad, in 1896, a year before the purchase of the coal-powered train, 19 unpatented lode claims were purchased by a company called Alaska Apollo Gold Mines, Ltd., which included the Apollo, Sitka, and Shumagin mines.

Author's Note: Some records show Alaska Apollo Gold Mines, Ltd. as the discoverer and developer of the Apollo mine, with Sitka Consolidated Mining Co. possessing the claims for the nearby Sitka mine. It is possible a merger happened at some point creating Apollo Consolidated Mining Co. – between Alaska Apollo and Sitka Consolidated, forming Apollo Consolidated – no information could be found to confirm this point, however, the names are interchanged often enough that it can be presumed this might have been the case.

Workings at Apollo included surface and underground openings with an overall depth of 243.8 meters and an overall length of 1,828.8 meters. The underground workings were extensive with one tunnel being more than 6,000 feet long.

Sporadic mining continued to happen after the initial boom but ultimately died down after 1904, picking up briefly between 1908 to 1913, just before the first World War.

Small amounts of ore were mined in 1916 and 1922 with most of the ore being processed by free milling, and it was the installation of a small cyanide plant in 1916 that boosted production by processing the tailings, with further ore being sent to Tacoma, Washington to be smelted.

According to historical records by the USGS, the production of each year since its discovery is in fact best guesses, as most of the reporting during the years 1891 to 1904 was either lost or poorly kept.

With that in mind, it is presumed the total production from the Unga Island mines for the years 1897 to 1904, inclusive, was $1,411,105, and the total for that region for the period from 1891 to 1905, inclusive, was $2,150,948, a substantial amount for the turn of the century and a good indicator for why prospectors went through hell and high water for it.

And according to further historical reports, the Apollo and adjacent Sitka mines produced roughly 150,000 ounces of gold from high-grade epithermal veins before the halting of operations in 1922. 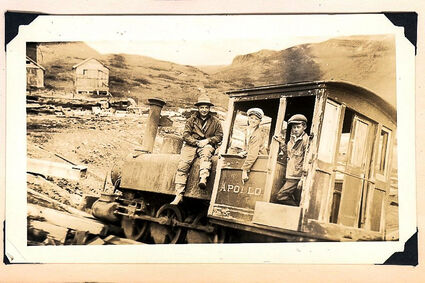 The Apollo locomotive that was used to transport ore between the mine, mill, and wharf in Unga. The very same train in the photo is currently being restored by Warren Roberts.

In recent years, Heliostar Metals Ltd. (formerly Redstar Gold Corp.) has been reexploring the historic mine sites of Apollo and Sitka and have been seeing promising results that very well may give new life to the abandoned Unga Island, and while Unga will most likely not be revitalized with the existence of nearby Sand Point, it has proven time and time again that mining boosts a local economy, and sometimes long enough for cities and even regions to exist for over a century.

While Circle, Fairbanks, Juneau, and Nome managed to stick around, a lesson can be taken that many of these old locations where mining technology was quick and fast as opposed to thorough and strategic should give pause to present prospectors that Alaska is a treasure trove and that the fervent mining of our forebears was just the cherry on top of the full sundae that the Last Frontier has to offer.