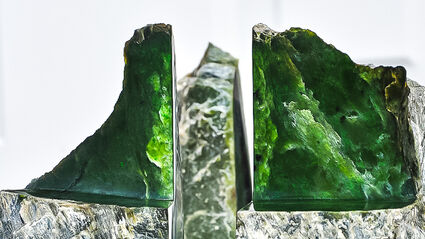 A jade specimen on display at Jade City, a store along the Stewart-Cassiar Highway about 116 kilometers (72 miles) north of the community of Dease Lake, British Columbia.

Fed up with the Discovery Channel show "Jade Fever" glorifying what it considers irresponsible and disrespectful mining practices in the territory of the Tahltan First Nation people it represents, Tahltan Central Government is demanding that the producer suspend airing the "reality show."