Major moves on northern mine projects

Rio Tinto, Newmont, and Coeur Mining invest over C$560 million on promising Yukon and Northern BC mine projects North of 60 Mining News – May 28, 2021 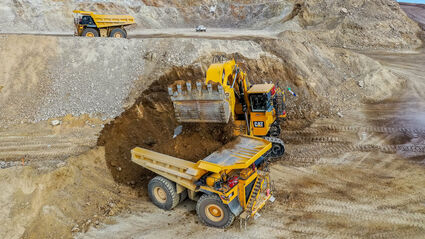 Admiring Victoria Gold's recent ramp-up of operations at the Eagle Mine in the Yukon, Coeur Mining invested C$141.7 million to acquire a 17.8% interest in the new gold producer.

The ultimate goal for most junior exploration companies is to discover and advance a mineral deposit to the point that it is large and rich enough to attract the attention of a major mining company to swoop in and nab a stake through an investment in the project or even an outright buyout of the junior.

Sometimes, if the global market conditions are right and the project shows enough promise, majors will invest in a project long before an economically viable mining project has been confirmed. Ofttimes, however, it takes years or decades of work by the junior before the metal markets and project stars align in such a way that the explorer and its promising deposit of minerals attract a major investment.

And then there are cases like Victoria Gold Corp. and its Eagle Mine in the Yukon, where the junior pulls together the cash and mining team to go into production on its own before a major comes knocking.

Over the past month, the stars have aligned for Victoria, GT Gold Corp., and Western Copper and Gold Corp., which have attracted more than half a billion Canadian dollars in investments from major mining companies with a growing interest in advanced stage gold and copper mine projects in the Yukon and Northern British Columbia.

The largest of these big-money deals was the finalization of Newmont Corp.'s US$311 million (C$393 million) acquisition of GT Gold, a junior exploration company that outlined a large gold-copper porphyry deposit on its Tatogga property in Northern BC's Golden Triangle.

GT Gold is a company whose stars came into alignment fairly early in the advancement of the project.

Immediately after its formation in 2016, this junior began exploring a strong gold-silver prospect on the Tatogga property known as Saddle South. While drilling over the next two years outlined a strong mineralized system at Saddle South, it was the discovery of the much bigger but lower grade Saddle North porphyry copper-gold deposit that piqued Newmont's interest.

With metal grades getting stronger the deeper the hole went, GT Gold was excited to further investigate Saddle North when the snow melted in 2018.

Intrigued by this porphyry discovery, Newmont nabbed an initial 10% stake in GT Gold with a C$17.6 million investment in the junior during 2019.

With the financial and technical backing of Newmont, GT Gold continued to explore Saddle North, culminating in a maiden resource for the porphyry discovery last year.

In less than five years after its founding, GT Gold outlined this intriguing copper-gold-silver deposit that compelled Newmont to spend US$311 million to acquire the 85.1% of common shares of GT Gold the global gold miner had not accumulated over the previous two years.

"With the acquisition of GT Gold and the Tatogga project in the highly sought-after Golden Triangle district of British Columbia, Canada, Newmont continues to strengthen our world-class portfolio," said Newmont President and CEO Tom Palmer.

With this previous presence in the Golden Triangle, Newmont had already begun building a connection with the Tahltan Nation, whose traditional territory covers both Tatogga and Galore Creek.

"The relationships we have with Indigenous communities, First Nations, and host communities are critical to the way we operate," said Palmer. "We will partner with the Tahltan Nation at all levels, and with the government of British Columbia to ensure a shared path forward as the company understands and acknowledges that Tahltan consent is necessary for advancing the Tatogga project."

For GT Gold, the transaction marks the ultimate objective of many junior exploration companies – a quick and fair buyout by a major mining company.

"As we pass custody of this world-class property to Newmont, we are sure it is in the best hands," said GT Gold Executive Chairman Ashwath Mehra. "I would like to thank the whole team of employees, consultants, advisors and directors, who over the years have helped create GT Gold and made it what [it] is today."

Western Copper and Gold hopes an initial C$25.6 million (US$21.2 million) investment by Rio Tinto Canada Inc. results in a similar outcome for its Casino copper project in Canada's Yukon.

"The investment by Rio Tinto, a leading global mining group which operates in 35 countries around the world, and whose purpose is to produce the materials essential to human progress is a strong endorsement of the Casino project," said Western Copper and Gold President and CEO Paul West-Sells.

Casino's porphyry copper potential was first explored more than 40 years ago, and Western first became involved with the Yukon project in 2006.

By 2013, the junior had advanced Casino to the feasibility and permitting stage, but the project had not attracted a company with the financial and technical wherewithal to move it forward to development – until now.

The 2013 feasibility study envisioned utilizing both a mill and heap leaching to recover the copper, gold, silver, and molybdenum found at Casino. Western Copper, however, has more than doubled the size of the Casino deposit since that study was completed.

This is a 106% increase in the millable measured and indicated tonnage over a 2010 resource estimate that formed the basis for the 2013 feasibility study. The amount of copper and gold in these categories has increased by 3.3 billion lb and 6.6 million oz, respectively.

Based on the expanded 2020 resource calculation, a preliminary economic assessment slated for completion around mid-year will consider a larger open-pit mine feeding sulfide ore to a mill and oxide ore to a heap leach facility that will recover gold, silver, and copper.

The primary objective of the PEA is to demonstrate positive economic indicators that justify further project development steps, including the completion of an updated feasibility study that provides further details for a mine that Western Copper can resubmit for permitting.

These plans have been bolstered by Rio Tinto's investment, which involves the acquisition of 11.81 million Western shares at C$2.17 each.

This gives the global mining company an 8% stake in Western and direct involvement in advancing Casino from advanced exploration to development.

In connection with the strategic investment, Rio Tinto will have the right to appoint one member to the Casino project technical committee; one non-voting observer to attend all Western board meetings; and up to three of its own workers at Casino.

Western, which will remain the sole owner and continue to be the operator at Casino, will use the cash from Rio Tinto's strategic investment to fund specific areas of PEA.

"We look forward to working with Rio Tinto to advance Casino," said West-Sells.

Not waiting for a global mining company to see the value of Eagle, Victoria Gold pulled together the cash and talent to advance the Yukon gold project to a mine on its own.

Now, closing in on a year since the Eagle Mine achieved commercial production, Coeur Mining has invested roughly US$117.2 million (C$141.7 million) to acquire a 17.8% interest in Victoria.

"We have long admired the quality of Victoria's Eagle asset and its recent success in ramping up operations," Coeur Mining President and CEO Mitchell Krebs said upon the May 10 investment.

Prospectors and miners have been admiring the gold potential of the Dublin Gold property, where Eagle Mine is now located, for more than a century. Acquiring Dublin Gulch in 2009, Victoria set out to realize the value of the property's potential with a modern, large-scale gold mine.

After investing C$130 million in exploration, studies, and permitting, Victoria broke ground on the Eagle Mine in the fall of 2017.

Without the backing of a major, Victoria pulled together more than C$500 million to build the mine in a financing package that included Orion Mine Finance, Osisko Gold Royalties Ltd., and Caterpillar Financial Services Ltd.

Victoria transitioned from a mineral explorer to gold producing mining company with the pouring of the first gold bar at Eagle Gold in September of 2019. Achieving commercial production on July 1, 2020, Eagle produced 116,644 ounces of gold during 2020, which included 38,896 oz recovered over the first six months of the year.

"Successful achievement of commercial production and operational ramp-up were major milestones for Victoria in 2020 and were completed while navigating the additional challenges brought on by COVID-19," Victoria Gold President and CEO John McConnell said earlier this year.

Impressed with this success and having an opportunity to acquire a significant stake from a large shareholder, Coeur cut a deal to acquire 11.07 million Victoria shares from Orion Co-VI Ltd. at C$13.20 per share. This is a roughly 5% discount to the trailing 30-day volume weighted price of Victoria shares for the period ending May 7.

As a result of its financial backing of the development of Eagle Mine, Orion owned 22.96 million Victoria shares, or a roughly 37% interest in the junior before the deal with Coeur.

In exchange for the Victoria shares, Orion received 12.79 million Coeur shares, valued at US$117.2 million based on the $9.17 30-day volume weighted price of Coeur stock through May 7.

"This compelling opportunity to acquire 17.8% ownership interest in Victoria from Orion is consistent with our stated strategy and capital allocation framework and complements our existing portfolio of precious metals assets in high-quality jurisdictions in North America," said Krebs.

While Coeur says no present plans exist to buy a majority stake in the Yukon gold mine, it may engage in future discussions with Victoria about potential strategic transactions to acquire Victoria's shares, business, or assets.

Orion has agreed to vote in favor of a Coeur offer to acquire at least 50% shares and up to all of Victoria's properties and assets.

In a move to protect itself and shareholders from an incremental buyout that does not reflect the value of the company and its assets, Victoria adopted a shareholder rights plan immediately following the move by Coeur.

Colloquially known as a poison pill, shareholder rights plans are a defensive maneuver to discourage an acquiring company from buying a majority share without negotiating directly with shareholders of the target company.

Victoria invoked what is known as a "flip-in poison pill," which allows shareholders, except for the acquirer, to purchase additional shares at a discount. 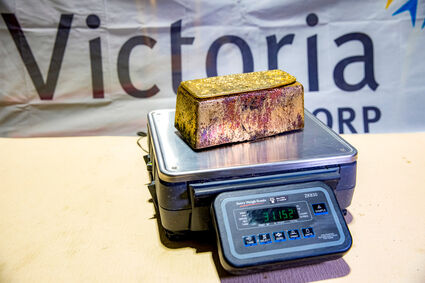 Weighing in at 1,001 ounces, this first bar of gold produced at Victoria's Eagle Mine was poured in September 2017.

Under this plan, if any person or group becomes a beneficial holder of 20% or more of the outstanding Victoria shares without complying with permitted bid provisions provided in the plan, the rest of the shareholders have the right to acquire additional shares at a 50% discount. The sudden surge in newly issued shares would make any attempted hostile takeover more expensive and difficult.

Victoria says it put this poison pill in its pocket to ensure shareholders are treated fairly if Coeur or any other company wants to make a takeover bid, as well as to protect against creeping bids that result in the accumulation of more than 20% of the company's shares.

While it remains to be seen whether Coeur and Victoria will come to terms on a buyout deal, the initial C$141.7 million investment is another sign of major interest in the vast mineral potential the Yukon and Northern BC have to offer.