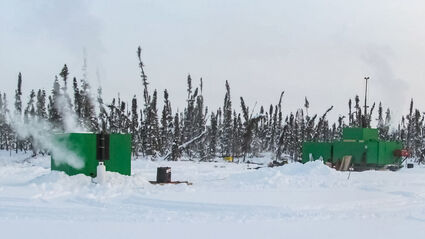 These rigs drill two of the close spaced holes completed early this year to upgrade the resources at Tardiff 1 on Vital Metals' Nechalacho rare earths project in Northwest Territories.

Vital Metals Ltd. and its Canadian subsidiary Cheetah Resources May 26 reported wide sections of high-grade rare earths mineralization in the first round of drill results from the early 2021 drilling at Tardiff Zone 1 on the Nechalacho project in Canada's Northwest Territories.

"The first results of this drilling program have exceeded our expectations of the higher-grade bastnasite dominated rare earth zones in the Tardiff Zone," said Vital Metals Managing Director Geoff Atkins

The initial ore is being mined from North T, a deposit that hosts 101,000 metric tons of measured and indicated resources averaging 9.01% light rare earth oxides, making it the largest rare earth deposit with an industry-compliant resource calculation.

Earlier this month, Vital announced the first blast marking the start of mining at North T.

The three Tardiff zones drilled early this year are found within a higher-grade bastnasite-rich area in the southeast corner of this resource. The 29 holes drilled focused on upgrading the resource so that mining and processing studies can be carried out for a planned stage 2 expansion at Nechalacho.

"The scale of the Tardiff sets the foundations for expansion of works at Nechalacho into stage 2 of our plans," said Atkins. "With mining activities currently underway at stage 1, the results of this drilling program confirm the enormous potential for Tardiff Zone 1 to be the foundation of our stage 2 expansion plans."

Highlights from the 19 holes drilled at Tardiff Zone 1 include: 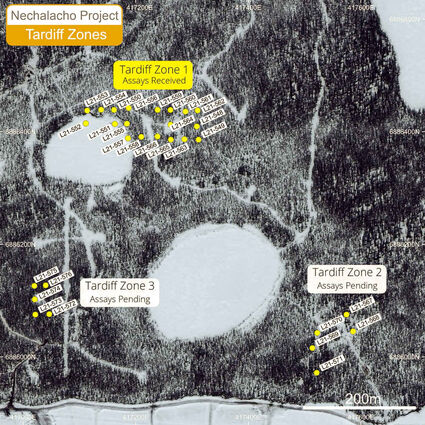 "The potential of this deposit is particularly exciting with the deposit remaining open in all directions, with the drilling program's highest grade and largest intercepts being located along an open boundary," Atkins said. "Further, with intercept grades that would be the envy of rare earth projects around the world, these results confirm the status of Nechalacho amongst the world's rare earth deposits."

The final results from the 29 holes will be used to calculate an upgraded resource for the Tardiff zones. Some of the sample material is also be used for metallurgical testing that will be needed for a feasibility study for the planned stage 2 expansion of rare earths production at Nechalacho.