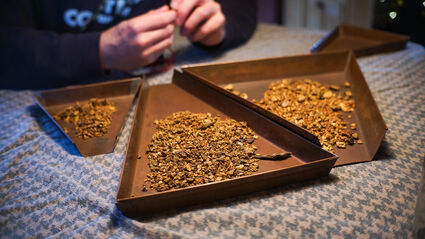 White Gold Corp., one of the most active mineral exploration companies in Canada's North in recent years, is taking a closer look at Nolan, a property found in Yukon's fabled Sixtymile area near the Alaska border. Here, eager prospectors have pulled gold from the region's creeks and streams since the precious metal was first discovered in the region in 1884.

White Gold is betting throngs of prospectors who scoured the area during the past 136 years left a lot of gold behind.

The aggressive junior, along with dozens of its peers, reported plans this spring to explore the Yukon for gold and other metals in 2021, hoping to get an early start on the field season, despite the COVID-19-related restrictions still in effect.

A part of the active Sixtymile placer gold camp of west Yukon, which has produced more than 500,000 ounces of alluvial gold to date, Nolan hosts multiple large targets with the potential for several mineral deposit types including orogenic gold, epithermal precious and base metal veins, along with porphyry copper-molybdenum-gold deposits.

Unlike many of their hardrock counterparts, Yukon placer miners rose to the challenge of working during the pandemic in 2020 to deliver outstanding production results.

According to government export tax reports, Yukon's 2020 placer gold production totaled 84,900 crude oz as of Nov. 5, the territory's highest output since 1999. With an average season gold price of C$2,506, this resulted in C$170.3 million in production revenue, of which about 87% (C$148 million) entered directly into the Canadian economy during the field season via goods, services, and wages associated with mining.

Backed by strategic partners Agnico Eagle Mines Ltd. and Kinross Gold Corp., White Gold carried out ground magnetics and very low frequency-electromagnetic (VLF-EM) surveys and collected 1,648 infill soil geochemistry samples in the Mount Hart area of Nolan that assayed values up to 1,120 parts-per-billion gold. The results further enhanced the prospectivity of several multi-element anomalies within a large 5,000-meter north-south by 3,500-meter east-west anomalous area that will be further evaluated in 2021.

"We are very pleased with the delineation of these targets in this area of significant placer mineralization," said White Gold CEO David D'Onofrio in reporting the results May 6. "It is further evidence of the expansiveness of gold mineralization in the White Gold District, and the effectiveness of our exploration methodologies. ... We are excited to advance these targets with additional testing and first-ever diamond drilling in the coming months."

White Gold holds an extensive land package in Yukon comprising 420,000 hectares (1.04 million acres) in more than 30 properties across the territory. The Nolan property covers an area measuring about 30 kilometers (19 miles) north-south by up to 22 kilometers (14 miles) east-west. The northern portion of the property north of the Sixty Mile River is accessible from the Top of the World Highway which extends westwards from Dawson City to Alaska, and local placer mining roads and trails. Access to the central and southern areas of the property is accessible by helicopter.

Other hardrock explorers active in the Sixtymile area include Flow Metals Corp., which explored its Sixty Mile Project west of Dawson in 2020 with 835 meters of rotary air blast drilling, as well as trenching, ground geophysics, and resampling of historical drill core. Multiple zones with arsenic and gold were identified with drill intercepts of up to 1.5 grams of gold per metric ton over 24 meters.

The 60 square-kilometer (23.2 square miles) property encompasses three gold-producing creeks where prospecting since the late 1800s resulted in more than 150,000 oz of production.

"We are excited to start drilling the high-grade zones that we discovered last year and to have highly qualified geologists help us integrate all our data through the Mitacs program," said Flow Metals CEO Scott Sheldon.

Sheldon referred to the Mitacs Accelerate Internship Project at the School of Earth, Environment & Society at McMaster University in Hamilton, Ontario.

The Sixtymile project includes a large historical dataset from previous operators. Sheldon said the junior's technical team will use the dataset to help identify the controls for mineralization on the property and in the region and allow the company to evaluate new prospective ground in the Sixtymile district.

ATAC Resources Ltd. also completed a small program of prospecting, soil sampling, and trenching in 2020 at its Connaught property west of Dawson. ATAC reported plans for more soil sampling, mapping, prospecting, and geophysics in 2021 at Connaught to evaluate "compelling" copper-molybdenum-gold porphyry potential in preparation for drilling in 2022.

The 137.3 square-kilometer (34,000 acres) property lies 65 kilometers (40 miles) west of Dawson City, in the headwaters of the Sixtymile placer gold camp. Some 26 distinct silver-lead-gold veins that sometimes also contain copper and zinc have been identified over a 13-kilometer (eight miles) strike length.

ATAC said the property has never been systematically evaluated for porphyry potential and this will be a priority focus in 2021 and future seasons. Rock samples collected at Connaught grade up to 4,050 g/t silver, 79.4% lead, 10.9 g/t gold, 7.24% zinc, and 1.98% copper.

More than a dozen companies, including White Gold, marshaled resources this spring to carry out 2021 mineral exploration programs south of Dawson in the White Gold and Klondike districts. 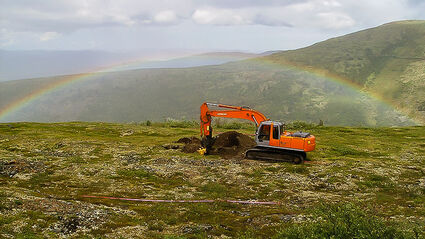 The Government of Yukon, meanwhile, reported that it has temporarily withdrawn from potential mineral staking the high conservation value areas identified by the Dawson Regional Land Use Planning Commission in its proposed land use plan. The Dawson planning region covers roughly 40,000 square kilometers (15,450 square miles) in the northwestern part of Yukon, the site of much of the territory's placer mining.

Including the Tombstone Territorial Park, the total amount of land withdrawn accounts for 44.7% of the planning area.

The Tr'ondëk Hwëch'in First Nation and Yukon government, along with the planning commission, are collaboratively developing the Dawson Regional Land Use Plan. All three parties approved a one-year interim withdrawal of mineral staking in the specified areas.

The commission plans to invite and consider public comment on the draft plan this summer and early fall of 2021. Existing holders of claims in the withdrawn areas can continue to work their claims during the period of the interim withdrawal. And the withdrawn areas may change after the commission makes its final recommendations, the government said.