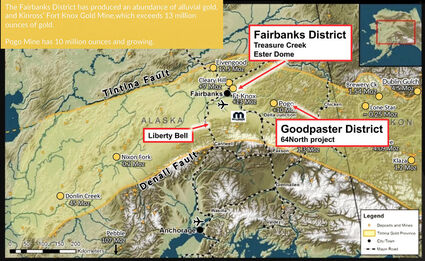 An Alaska-based mineral explorer that has long attracted Australian companies to projects it has generated, Millrock Resources Inc. is actively working with two such companies on gold exploration projects in Interior Alaska – Felix Gold Ltd. in the Fairbanks Mining District and Resolution Minerals Ltd. in the Goodpaster Mining District.

"The exploration season is in full swing in Alaska," Millrock Resources President and CEO Greg Beischer said earlier this month. "Our funding partners are mounting very significant campaigns that could result in new gold discoveries in the emerging Fairbanks and Goodpaster gold districts."

A newly formed private exploration company that is working on becoming listed on the Australia Stock Exchange, Felix entered into a strategic alliance with Millrock on several Interior Alaska projects – Treasure Creek and Ester Dome near the Interior Alaska city of Fairbanks, plus the Liberty Bell project about 70 miles to the southwest.

The name of the new Australian explorer pays homage to the Italian prospector who first discovered placer gold in the streams draining the hardrock gold it is seeking in the Fairbanks district.

"The new company, Felix Gold, of which Millrock will become a significant shareholder, is named after Felix Pedroni, the prospector credited with the initial discovery of gold in Fairbanks in 1902," said Beischer.

Collectively known as the Bank project, the Treasury and Vault claims border both Golden Summit and Kinross Gold Corp.'s Fort Knox property. Millrock says Bank hosts a number of interesting gold occurrences. The 2021 program at Bank is expected to include soil sampling and prospecting with the goal of developing drill targets for the 2022 season.

In the meantime, a major soil sampling program in preparation for potential drilling later this year is being carried out at Treasure Creek.

Located about five miles south of Treasure Creek, the Ester Dome property is home to the past-producing Grant gold mine. Millrock says all historical geological data from Ester Dome has been imported into a database and is being evaluated using 3D visualization software.

Felix is evaluating this resource to determine what, if anything, needs to be done to bring the estimate up to date and in compliance with the Australian Joint Ore Resources Commission (JORC) standards for resource calculations.

While Felix and Millrock evaluate the very large land package they have accumulated in the Fairbanks district, Resolution is drilling targets at 64North, a roughly 160,000-acre land package surrounding Northern Star Resources Ltd.'s Pogo gold mine in the Goodpaster district.

Under a deal signed at the end of 2019, Resolution has the option to earn up to a 60% interest in this large land package by investing US$20 million in exploration spending over four years.

Upon earning a 60% interest on the entire 64North project, Resolution will have the option to increase its interest on one of nine claim blocks that make up the larger project – West Pogo, Shaw, Eagle, LMS-X, South Pogo, East Pogo, North Pogo, Last Chance and Divide – by funding a feasibility study and Millrock's portion of mine development on the selected block.

With the recent completion of a 12-hole drill program at East Pogo, Resolution has invested enough to earn a 42% interest in 64North. 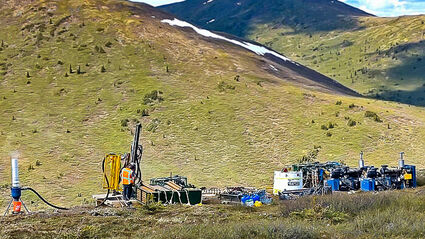 This 1,663-meter reverse circulation program tested shallow, gently dipping conductive zones detected by geophysical surveys carried out last year. A total of 1,663 meters was drilled in 12 holes. Resolution reports that seven quartz veins up to 4.6 meters thick were cut in five of the holes drilled.

"We are encouraged to see seven zones of likely Pogo-style flat lying quartz veining up to 4.6 meters thick, amongst intensely altered host rock in RC drill chips at the East Pogo Prospect, however, assay results will be the real test and are expected shortly," said Resolution Minerals Managing Director Duncan Chessell.