Mining activity heats up after slowdown

Explorers return to hunt for gold, diamonds, and base minerals North of 60 Mining News – August 27, 2021 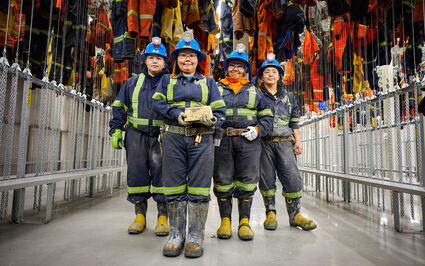 Nunavut-based workers hold a bar from the 2019 first gold pour at Meliadine, Agnico Eagle's newest mine in the territory. Agnico has spent more than US$18 million supporting roughly 450 Nunavut employees, who received 75% of their salaries over 15-month hiatus due to COVID-19.

Mineral exploration activity is heating up this summer in Nunavut after a yearlong hiatus sparked by restrictions and cautionary moves driven by the COVID-19 pandemic in early 2020.

For the northern Canadian territory's two mine operators and a handful of advanced- and early-stage explorers, the outlook for 2021 programs is much brighter.

In mid-June, the Government of Nunavut gave Agnico Eagle Mines Ltd. the green light to allow its workers living in the Kivalliq region of the territory to return the company's Meliadine and Meadowbank sites.

Agnico Eagle sent home all Nunavummiut workers from its Nunavut mines in March 2020 to keep communities in the territory safe from COVID-19.

During the ensuing 15 months, the miner spent more than US$18 million supporting roughly 450 Nunavut employees, who received 75% of their salaries during their hiatus, according to Agnico Eagle. The company's Nunavummiut workforce is expected to be fully re-integrated into operations by the end of the third quarter.

In strong operating results during the second quarter, Agnico Eagle reported payable gold production of 500,698 ounces (excluding 25,308 oz of payable gold production at Hope Bay, and including 9,053 oz and 348 ounces oz pre-commercial production of gold at the Tiriganiaq open pit at Meliadine and Amaruq underground project, respectively) at production costs per ounce of US$834, total cash costs of US$739/oz and all-in sustaining costs (AISC) of US$1,021/oz.

Agnico Eagle also reported positive exploration results at several mines during the first half of 2021, including Hope Bay, where it confirmed the expansion potential of the Doris and Madrid deposits.

Baffinland Iron Mines Corp. reported July 15 that Nunavut officials approved a proposal for its Nunavummiut employees to return to work at the Mary River iron mine.

The company also said it will avoid icebreaking activities this year to preserve the integrity of the Eclipse Sound summer narwhal stock after Inuit residents expressed concerns about the animal population.

"This decision is based on direct response to Inuit input and the recognition of an important community-based project occurring, which overlaps with the planned start of the Baffinland shipping season. Baffinland understands the importance of narwhal, and ... the importance of the construction of the Small Craft Harbour in Pond Inlet continuing this year," said Brian Penney, president and CEO of Baffinland Iron Mines. "Without knowing what mitigation measures might be placed on the Small Craft Harbour construction activity, our decision to halt icebreaking for the spring is based on the precautionary principle that is the foundation of our adaptive management plan."

The trigger to begin the 2021 shipping season is enough open water to avoid the need for icebreaking and likely will result in a two-week delay in starting Baffinland's shipping season.

North Arrow Minerals Inc. Aug. 19 reported completing field collection of a 2,000-metric-ton bulk sample at its Naujaat diamond project in northeastern Nunavut. The C$5.6 million bulk sample program was funded by North Arrow's partner, Burgundy Diamond Mines, as part of a June 1, 2020 option agreement for that junior to earn a 40% interest in the Naujaat project by funding the current bulk sample program.

"Bulk sample collection from the Q1-4 kimberlite is now complete, with field crews having delivered 2,500 bulk sample bags of kimberlite to our laydown near the community of Naujaat," said Ken Armstrong, North Arrow's president and CEO. "At approximately 2,000 metric tons, the 2,500 bags represent the high end of our anticipated tonnage range for the program, and we look forward to loading the sample onto the annual Naujaat sealift in September for shipment to the processing laboratory."

Armstrong said the program benefited greatly from the prepositioning of sampling supplies in 2020 and working directly from Naujaat with the support of 25 local employees.

He said collecting and transporting the sample to the Naujaat laydown area cost about C$2.3 million. Sample processing and diamond recovery are expected to begin in the fourth quarter.

North Arrow and Burgundy hope to recover diamonds from the sample that confirm the size, distribution, and character of "an important population of potentially high-value, fancy yellow to orange-yellow diamonds" found in the Q1-4 deposit.

More gold at Back River

Drill testing within the trend in hole 21GSE600 returned 5.42 grams per metric ton gold over 28.05 meters, including 12.68 g/t gold over 5.30 meters, returning the highest gram-meter intercept within the target trend to date.

"The ability to demonstrate significant resource growth potential such a short distance from our proposed mining infrastructure is a tremendous success and further testament to the Goose Property gold endowment. Our Hook target is located within the shadows of the Goose Main open pit and provides opportunities for exceptional alignment as we advance both exploration and development synergies for the entire southern Goose Main-Hook-Nuvuyak gold trend," said Sabina President and CEO Bruce McLeod.

The Back River project received its final major authorization in June 2020 and now has all major permits and authorizations for construction and operations.

Objectives of the 2021 program include better understanding the controls of higher-grade zones within the structures, evaluating additional structures on and adjacent to the Ulu fold hinge, and expanding and infilling previously known but poorly interpreted mineralized zones.

The data will assist in targeting for Blue Star's 2021 exploration program. With the recent acquisition of the Roma Project, Blue Star now controls over 16,000 hectares (39,536 acres) in the High Lake Greenstone Belt, Nunavut. A significant high-grade gold resource exists at the Flood Zone deposit (Ulu lease). 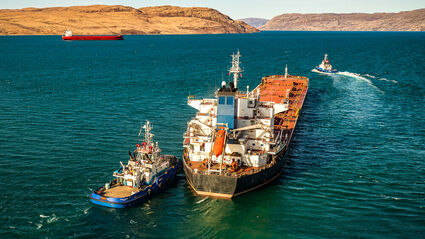 The surveys are designed to test for extensions along strike and at depth of known mineralization, and to follow up on previously identified gravity and other geophysical anomalies in anticipation of a proposed 2022 drilling campaign. Survey grids are planned for areas at both the Storm copper project and Seal zinc-silver deposit that are intended to refine the existing targets and generate more quality targets for follow-up exploration in 2022.

This marks the first electromagnetic survey at Storm. Other geophysical techniques have, so far, been proven ineffective in detecting mineralization at this zinc-silver project.