Nunavut mine created legacy of partnership

The first mine in Canada to hire First Nation's People; the North Rankin Nickel Mine built a bridge between two cultures North of 60 Mining News – October 1, 2021 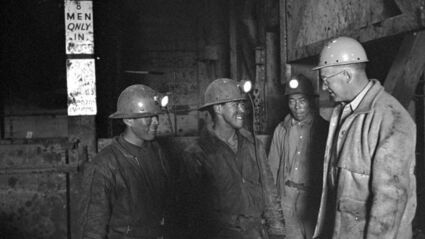 Workers joking with a supervisor at the North Rankin Mine [Harry Liberal, Titi Kudlu, Noah Kumakjuaq and Andy Easton].

Found within the newest territory of Canada, Nunavut may seem barren and inhospitable, yet it has provided resources and succor to its First Peoples for thousands of years. While European colonizers and the indigenous peoples in their ancestral home suffered many differences, it was the shared efforts of the two groups in trade and labor that bridged this gap, eventually leading to the formation of Nunavut itself.

While it may seem strange, as history often describes events before our lifetime, that a relatively recent change to Canada came with the redrawing of its map on April 1, 1999, dividing the already sprawling Northwest Territories into two with the creation of Nunavut, a testament to the strength of Inuit political leaders and the flexibility of Canadian political institutions.

However, as great a success in claiming and naming a region in this modern world as one for your people, it was a beleaguered and tiresome trek for many of the First Nation's people.

Known as Inuit, the Inuktitut word for people, much of recent history has them called as Eskimo, who obviously prefer the substitution of their own term for themselves. While striking aspects of their material culture are well known – iglu (snowhouse) and kayak (small boat), perhaps better than ulu (woman's knife) and umiak (large boat) – their intellectual culture and values have served Inuit people as well in the modern world as their unique technology did in earlier ages.

The newly dubbed territory of Nunavut is geographically large, with a distinctive variety of landscapes and ecosystems. The whole region, from the glacial mountain fjords of the east coast of Baffin Island to the rolling rock hills of the west coast of Hudson Bay, is arctic terrain, meaning it lies north of the tree line.

While what remains of Northwest Territories is frequently referred to as the western Arctic, it is more appropriate to call it subarctic, since the largest portion of that territory lies within the tree line.

Regardless, much of both territories rest within what is known as the Canadian Shield, a large area of Precambrian igneous and metamorphic rock, dating it to the earliest part of Earth's history.

Scoured down to stone during the last ice age, glaciation has receded over time, revealing a joined bedrock region in eastern and central Canada, stretching from north of the Great Lakes to the Arctic Ocean. This shield covers more than half of Canada and most of Greenland and extends south into the northern parts of the United States.

To make this place home, a hardy and innovative people had to have devised ways to survive, and so they did.

While European exploration happened as early as the 1600s by Lt. John Rankin of the British Royal Navy, of which the current hamlet and actual inlet, Rankin Inlet, gets its name, it would not be until over 300 years later that further exploration and eventual European settling would occur in the area.

According to Geological Survey Bulletin 1223 by the USGS, published in 1966, "In 1928 R. G. O. Johnston discovered a nickel sulfide deposit on the north shore of Rankin Inlet, west coast of Hudson Bay, about 900 miles north of Winnipeg. It was drilled between 1930 and 1937, and in 1951 the North Rankin Nickel Mines, Ltd., was organized to mine the deposit. Mining started in 1957 and was completed in 1962. The deposit contained 460,000 tons of nickel-copper sulfide ore containing 3.3% nickel, 0.8% copper, 0.2% cobalt, 0.03 ounces platinum per ton, and 0.06 oz palladium per ton. This operation is one of the few that have been attempted in the subarctic region of Canada."

As succinct an explanation as any, the town itself was founded by the owners of the Rankin Inlet Mine, just north of Johnston Cove. Starting in 1957, the mine produced nickel and copper from an underground operation.

The mine was opened due to a sharp increase in the price of nickel due to the Korean War, of which it operated for five years before shuttering due to declining prices and a depletion of the ore body.

The significance of this mine, however, cannot be expressed without first detailing the conditions of the region at this time.

Before the opening of the mine, northern agencies, including the Royal Canadian Mounted Police and federal government officials, strove to prohibit Inuit people from congregating around permanent settlements by enforcing a strict "policy of dispersal."

This policy aimed to protect traditional Inuit land-based culture, but more importantly, to ensure any Inuit would not become a financial burden to the nation. At the same time, contradictory educational and settlement policies sought both to elevate the First Nation's People from their "primitive" position through modernizing their social and cultural practices while at the same time preserving their "independent" and "traditional" lifestyles.

Due to the collapse of Arctic fox fur prices in the early 1950s, and a perceived crisis in caribou populations, the Department of Northern Affairs adopted an increasingly interventionist policy in the eastern Arctic. These developments, and the negative publicity surrounding desperate Inuit living conditions (including episodes of starvation among inland Inuit groups) largely ended the laissez faire attitude of the government, which shifted to the promotion of wage labor as a solution to the "Eskimo problem."

Along with work in construction at Distant Early Warning (DEW) Line stations, the mine at Rankin Inlet appeared to offer an opportunity to shift the Inuit away from their seemingly precarious land-based economy and toward industrial wage labor and settlement life.

As a Canadian Press reporter noted in 1958, "[Government] officials here call the Rankin experiment a 'bright shining light' against the general background of the Eskimo Problem. Sustained success would mean a lot in the program to integrate the Eskimo from his stone-age past into the 'time clock' world."

Writing to the mine company's secretary for information about the operation, Deputy Minister of Northern Affairs R. Gordon Robertson suggested that "because of the steadily increasing inroads on the wildlife resources of the North, it is going to be necessary to have more Eskimos adapted to wage employment as their means of livelihood."

To this end, the Department of North Affairs and National Resources and other government agencies in the region, such as the RCMP, assisted the North Rankin Nickel Mine in identifying suitable Inuit candidates for employment.

For its part, the company initially embraced Inuit labor as a seasonal workforce, and many Inuit were engaged in construction and stevedore work (as well as trade) at Rankin Inlet as early as 1953.

By 1956-57, as the mine shifted to production, Inuit people were recruited to Rankin Inlet in increasing numbers. North Rankin Nickel Mine president W.W. Weber told Northern Affairs he was "strongly in favor of employing as many Eskimos as possible" and integrating them permanently into the life of the mining camp. That year, Inuit employment increased from 14 to 80 workers, of which they quickly became integrated into nearly all aspects of the operation, including underground work.

While the mine's life was short, as one of the first mines in the Far North, the North Rankin Nickel Mine, did however, become the very first mine to hire indigenous people throughout the entire country of Canada.

Many Inuit people came in off the land to work in the mine during those years, with many moving on to work in the mines at Yellowknife, Flin Flon and elsewhere. Not long after, the population of Rankin Inlet dwindled to almost half by 1964.

Several unsuccessful attempts followed to develop alternate sources of income for the town, including pig ranching and chicken raising.

But it was federal work that quickly established its current legacy, which included a ceramics project, where local Inuit people were taught how to create a "Northern" style of ceramics which included images of local wildlife.

Then, in the early 1970s, the Government of Northwest Territories moved its regional headquarters to Rankin Inlet, which bolstered the community.

Today, per the 2016 census, Rankin Inlet is home to nearly 3,000 people, primarily of Inuit descent, and while Rankin Inlet lost to Iqaluit in 1995 to become the territorial capital of the future Nunavut, it is now a strong cultural site for artists and artisans, that also houses the only Inuit fine-arts ceramics production facility in the world. 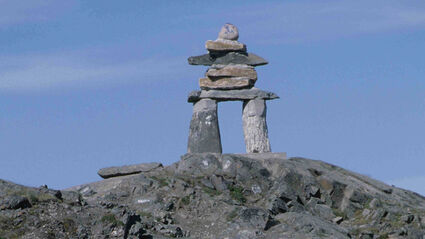 The Inuksuk is a symbol with deep roots in Inuit culture, a directional marker that signifies safety, hope, and friendship. The word inuksuk means "something which acts for or performs the function of a person." This Inuksuk sits atop a cliffside in Rankin Inlet.

To add to the growing prospects of this weathered settlement, Agnico Eagle Mines Ltd., has settled near the historic mining town, and with the projected numbers from a 2017 resource estimate, its Meliadine mine is expected to produce gold until at least 2034, and that is more than twice as long as Rankin Nickel survived.

As part of the town's history with mining, during the heights of the COVID-19 pandemic, Agnico spent more than US$18 million supporting roughly 450 Nunavut employees, who received 75% of their salaries during their hiatus.

Seen too many times to count, with an influx of work, a stable wage brought by significant resource development, and the prospect of expansion with the company's additional Amaruq mine, while Rankin Inlet never saw a boom, as the mine has recently kicked off, its not too early to say it could experience one now.