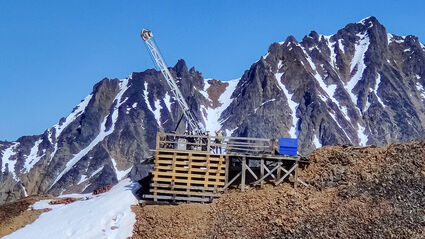 Nova Minerals completed six holes during its first round of drilling at RPM, a high-grade gold prospect toward the south end of its 125-square-mile Estelle property in Alaska.

While one hole does not make a deposit, the long section of strong gold mineralization in Nova Minerals Ltd.'s fifth hole at the RPM North prospect on its Estelle project in Alaska is a superb start.

Situated about 16 miles (25 kilometers) south of Korbel, where Nova has outlined 4.7 million ounces of gold in 518 million metric tons of inferred resource averaging 0.3 grams per metric ton gold, RPM is a high-priority target that Nova has been anxious to drill.

Nova's surface exploration near this discovery hole at RPM North, an area previously referred to as RPM-1, turned up rock samples with grades as high as 291 g/t gold.

At RPM South, a second area about 600 meters to the southeast that was previously referred to as RPM-2, Nova geologists collected multiple rock samples, some with grades as high as 103 g/t gold.

Based on the previous drilling and its own exploration of the area, Nova decided to carry out an initial drill program aimed at establishing RPM as a second gold project area at Estelle.

Assays from the first three holes of this drilling indicate that RPM could host a significant gold resource at grades much higher than the large Korbel deposit to the north.

While not as spectacular as RPM-005, the other two holes also cut intriguing gold intercepts:

"This marks a major milestone for Nova Minerals. RPM is now confirmed to be the second significant project development area at Estelle and will be a key component of our ongoing resource development work on our path towards production at the Estelle gold project," said Nova Minerals CEO Christopher Gerteisen.

Once the assays are received from the remaining three holes drilled during Nova's initial test of RPM, the company plans to have an inaugural resource calculated for this emerging gold deposit. 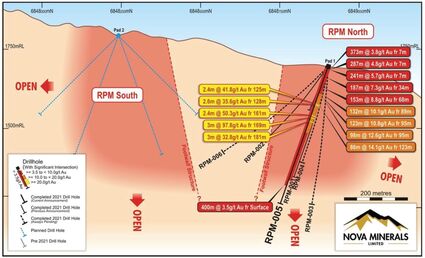 "Furthermore, we are now planning to have at least two drill rigs at RPM in the next round of drilling with a rig designated for what looks to be the much larger RPM South gold zone, which we believe will converge with RPM North at depth," Gerteisen added.

In the meantime, Nova has turned its attention back to resource upgrade and expansion drilling at Korbel.

"We currently have 4.7 million oz at the Korbel Main deposit, which represents just the beginning of our Estelle journey with the global resource inventory expected to increase significantly in the near term, especially now with RPM's maiden resource expected later this year," the Nova Minerals CEO concluded.