Engine of civilization, fueled by mining

Hand tools to monolithic machines; stones to steel; the journey of a species has been funded and constructed upon mining North of 60 Mining News – October 29, 2021 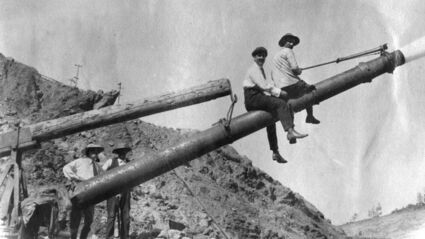 Two men riding a giant hydraulic water jet (monitor) at La Grange hydraulic mine near Weaverville, California. Until their eventual banning in 1884, flooding, mud and landslides, and severe erosion damage had devastated the Sacramento Valley.

With such incredible technologies at mankind's disposal today, it is easily forgotten the ingenuity and sheer gumption that our predecessors brought to solving some of the more rigorous and demanding jobs that construed early development. The ever-present wheel, hand tools, weaponry, and beyond, the plethora of devices humanity has created, only expanded into breathtaking and mind-numbing concepts our forebearers could never fathom.

Areas such as animal husbandry, agriculture, and architecture, the people of Earth have continued to refine and simplify whilst also creating complex machines to accomplish even the most menial of tasks.

One such industry that consumes and surrounds the very foundations of present society and defines the eras of which our civilization progressed is mining.

Stone, tin, copper, iron, coal, etc., the earliest materials used to fashion civilization, is still very much the same as it has always been, albeit with many more steps; we must still dig.

Today, we use incredible vehicles to carve and transport millions of metric tons of soil and rock; electricity and automatic calculations for powerful explosives; wireless signals to transfer detailed data from one side of the planet to the other in seconds; and now even artificial intelligence to filter and streamline numerous aspects of geology into concise approximations of resources.

Yet before all these wonderful inventions came simple stones and backbreaking work.

A history of mining

It has been said that the first mining efforts simply involved searching for rocks most appropriate for making tools. Primary stone tools have purportedly been dated to approximately 2.6 million years ago, predating even Homo Sapiens.

As Homo Sapiens developed and the population grew, communities began to replace their nomadic lifestyle, with early tribes settling around primary food and water sources. Soon after, the location of other natural resources began to have an impact on human settlement.

It is even speculated that mined materials were probably among the first materials traded.

Some tribes may have had regular access to chert or obsidian – highly valued for their sharp edges. Whereas others may have had access to the best clay for making pots, bowls, or other utensils.

Early trading required that humans develop more sophisticated communication skills and could be considered the basis of civilization.

The earliest known mine for a specific mineral was coal from southern Africa, appearing worked from 40,000 to 20,000 years ago. But mining did not become a significant industry until more advanced civilizations developed 10,000 to 7,000 years ago.

In early times, the only metals available were those found in a metallic state in nature. The most abundant being copper, but gold, silver, and mercury were also found and highly prized.

Later, the application of fire to mined materials became a technological breakthrough and proved to be one of the critical advancements necessary for a budding civilization.

In fact, excavated elements transformed themselves by applying heat, and as a result, pottery hardened to last more than a season. Even more significant, metals that could be melted could be formed into objects.

At every stage of human development, the so-called Ages of civilization, it was the primary material we mined and worked with that defined that era.

Stone Age, Bronze Age, Iron Age. Right up until we became too clever and jumped right into industrialization.

But the advancement of pottery technology in conjunction with experimentation and observation of the results of firing on different materials led to the development of smelting, which really started our journey as a species.

It was the Egyptians and Sumerians that smelted gold and silver from ore roughly 6,000 years ago. As a result, these metals began to have a value that was transferable between peoples and cultures.

Approximately 5,500 years ago, we discovered that by mixing a little tin with copper, we could make bronze, the first alloy, harder than its constituent metals. It was this innovation that created an era of prosperity that lives on in its name, the Bronze Age.

Metalworking advanced over the next few thousand years, as did the use of other mined materials: asphalt, exported from the Dead Sea area to Egypt around 4,500 years ago. Cobalt used to color glass. Egyptian ships imported gold from southern Africa, and Sumeria began trading in coins to replace barley as legal tender.

With the development of Mediterranean civilizations, mining became one of the most critical industries in the world.

Ancient Athens grew wealthy due to its silver mines – the Laurion Mines.

The Romans expanded, in part, in the pursuit of mining, as the growth of its empire required more and more money to finance operations. In addition, it needed metal to create military equipment, and the requirement of infrastructure compelled the function of the government.

People mined through shafts and galleries supported by stone columns, as timber became scarce in the area. It even became a death penalty for extracting ore from the supporting stone columns – that is how important mining operations became.

During the rise of Europe, governments gave miners extensive rights to take land and profit from the minerals they found there. Nevertheless, the governments always required a portion of the revenue from mining as payments for granting the mining rights.

Ultimately, the realization endured that countries could not develop without the exploitation of natural resources. Thus, civilization's progression required increasing amounts of mined materials to manufacture the necessities of everyday life and fund the economies of nations.

The influx of this mineral wealth from the New World helped to finance the Renaissance. Eventually, the creation and expansion of countries in the New World and the development of the Industrial Age resulted in the generation of the mining industry we have today.

The evolution of mining technologies tells a much more complex story than it seems at first glance. In more recent American tales, a poor farmer from New York or Pennsylvania could go "strike it rich" in the goldfields out West and return home a wealthy man. But, of course, this rarely happened, and most fortune seekers returned home with less than they had when they began their journey.

However, as mining techniques changed, even this possibility was lost. Thus, the change in mining techniques is really a story of the evolution of the Gold Rush from an individual to a corporate phenomenon, much like today.

In the beginning, miners used primitive tools for digging. Mining shafts were dug out by hand or using stone tools, making the entire process lengthy and grueling.

Eventually, the pick and hammer were replaced with fire to clear tunnels and reach greater depths at a faster rate. By piling heaps of lumber near a rock face and burning them, the rock was weakened and would fracture away.

But inventions like the water wheel, levers and pulleys, the siphon principle, and cogs and gears contributed to multitudes of contraptions that allowed early miners to work before the onset of the industrial age.

Yet, mining would take possibly its largest leap forward in the late Middle Ages, when miners started to use explosives to break up large rocks. Black powder had reached the West, most likely from China during trade along the Silk Road. While it offered a tremendous shift for mining, it was a dangerous and often life-threatening job.

For nearly 300 years, miners used black powder methods until explosives got an upgrade with the invention of dynamite in the late 1860s. Carving cliffsides and shearing stone with concentrated blasts made underground mining more viable for those lucrative lodes.

Along with dynamite, around the same time, mechanical rock drills were invented. A percussive drill that replaced hand drilling, which made mining and tunneling much faster. The first design operated with steam but later would move to compressed air.

And although hydraulic water jets were being used for nearly three decades before the invention of the mechanical rock drill, their use was quickly banned as miners eroded away hills and mountains and flooded streets with mud and water.

Either way, long gone were the days of striking a length of steel repeatedly with a sledgehammer.

At the onset of the Gilded Age of America, the development of electricity allowed for motors to become a reality, providing strength and power never before dreamed of.

Into the Industrial Age

Around the turn of the 20th century, while the world was slowly shifting from classical to modern, the gold rush frenzies from California to Alaska were in full swing.

Railroads, dredges, barges, sluice boxes, stamps, rockers, and eventually hydraulic mining machines, one after the other, provided baby steps to the mining ventures of today.

While agriculture had tractors, miners were in a frenzy to use anything, creating disputes and controversy for its harm to the environment – for, at that time, there was little concern aside from striking it rich.

Mercury, cyanide, chlorine, sodium, or calcium hyposulfite, whatever a miner could do to separate the wheat from the chaff.

Incredible feats, such as Davidson's Ditch – a 90-mile (140 kilometer) conduit built in the 1920s to supply water to gold mining dredges in Interior Alaska, or the Apollo No. 1 shaft, an over 800 foot deep and over three-thousand-foot-long shaft dug along the coast of the Alaska Peninsula in the early 1900s, were capable due to the fervent desire for wealth and the ingenious solutions these oldtimers devised to get it.

Besides locomotives for hauling and providing torque, early machines included dredges – water-bound multi-story machines built in the first half of the 1900s that would extract gold from sand, gravel, and dirt using water and mechanical methods.

It must be noted that, more often than not, early miners would generally sift through softer soils, called placer mining. Hard rock mining was a complex and backbreaking venture that most of the average prospectors could not hope to afford; similarly, surface mining required more effort than was simply dipping your fingers in the sand.

So, to help with this placer mining, handheld pans, bateas (larger gold pans, roughly half a meter in diameter), rockers or cradle (a wooden box that sifts through soil), sluices (not unlike a rocker, yet a sluice often rested in the waters being filtered), Long Toms (not the heavy artillery, but a very long sluice box), and dry washers (early blow dryer to separate heavy gold from lighter dirt).

When most of the easy to get to placer gold had been recovered, stampeders did not give up. Although most could not viably mine hard rock, there was still tons of earth to move, so they did. 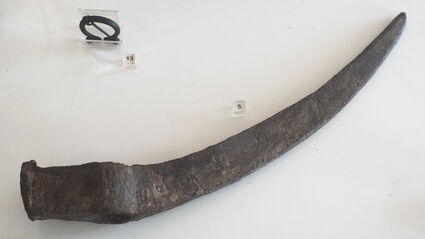 Roman pickaxe from Mine of the Moors in Portugal. Found in a Roman-period mine, dated between 1st-2nd century.

While the California Gold Rush began to shape the business model for modern mining, the Klondike Gold Rush brought mining back to its placer roots.

Regardless, the many machines, devices, contraptions, and tools were all created for the sake of helping dig better.

Today, a new Golden Age of mining technologies has emerged that involves artificial intelligence, autonomous and electrified mining equipment, and a plethora of industrial internet of things innovations.

These new and exciting technologies come at a time when humanity is reaching for the stars. Much like the visions of the New World in the 15th century, today, interstellar travel is a dream for many, but to fund such journeys, resources will be needed.

While leaving Earth's atmosphere is still expensive, solutions are being devised to develop technologies in space, and how will mankind build things up there?