Known for his ingenuity, generosity, and love – Joe's contributions to Alaska will endure, and his story will live on North of 60 Mining News – June 3, 2022 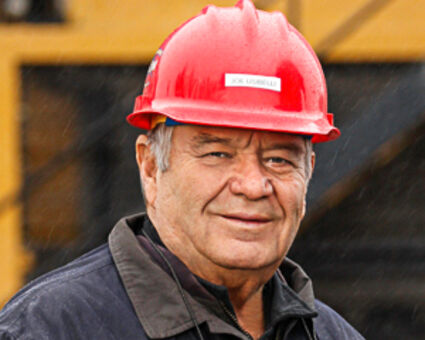 Whether you are involved in the mining industry or not, lifelong Alaskans, at some point or another, have most likely heard the name Usibelli.

Perhaps, however, many Alaskans may not be aware that behind the Usibelli Coal Mine is the Usibelli family – owners and operators of the largest coal mine in Alaska. Yet before a titan of Alaskan industry was born, generations of sweat, elbow grease, and raw determination was needed before the name Usibelli would be known.

Built from four generations dating back to 1943, the Usibelli Coal Mine grew from the efforts and ingenuity of one man with an initial 10,000-ton contract and grew to a 1-million-per-year coal operation with a workforce of approximately 115 Alaska residents.

As the only operational coal mine in Alaska, UCM is supported now by more than just a dozer and truck but modern mining equipment and state-of-the-art engineering.

In addition to supplying coal to six Interior Alaska power plants, over the years, the family-owned company has exported coal to Chile, South Korea, Japan, and several other Pacific Rim destinations.

Doing its part to give back, the Usibelli Coal Mine sponsors many community events and activities. Through the Usibelli Foundation, it provides grants for education, health and social services, youth programs, arts, civic groups, and activities to more than 80 organizations annually.

In addition to its community support, due to four generations of Usibellis calling the Healy area home and because the mine is the family's "backyard," it may come as a bit of surprise that years before federal law required it, UCM pioneered successful land reclamation and restoration programs.

The company's ultimate goal was to re-establish a natural landscape on previously mined land. Since 1970, the mine has reclaimed more than 5,500 acres and planted more than 500,000 seedlings. Over time, native Alaskan vegetation pervades the area, returning the mined land to its natural appearance.

Mining began in Healy, Alaska, in the early 1900s in an area that became known as Suntrana. An abundance of naturally exposed outcroppings of coal seams was highly visible, which resulted in the Alaskan pioneers tunneling directly into the coal to secure fuel for steam-driven riverboats and the later constructed Alaska Railroad.

In 1918, construction on the Alaska Railroad reached Healy, some 250 miles north of a little port community called Anchorage and 100 miles south of the bustling gold center of Fairbanks.

Three years later, the Healy River Coal Corporation opened a mine there, whereby the first years of operation used horse- and tractor-drawn wagons to travel to the Nenana River and by tram across that to the Alaska Railroad.

In 1922, a fellow by the name of Austin "Cap" Lathrop began investing in the mine and, in just two short years, was its principal stockholder and president. Under his management, the mine grew into the largest coal producer in Alaska's interior.

With the mine's portal just north of Healy Creek, and all mining activities restricted to that side of the stream, most of the workers lived in bunkhouses at the mine site. Later, log cabins were built on company property south of the creek to house families of married workers, and from those cabins sprang up the town of Suntrana.

While things continued to look promising for Healy River Coal, in 1950, Lathrop was killed in a mine accident, and the operation was sold off.

Up to Lathrop's passing, the mine's only customers were in and around Fairbanks; thus, when an Italian immigrant named Emil Usibelli opened his own strip mine at Suntrana near Healy, there wasn't much in the way of possible customers.

At the time, many laughed and took bets on how soon this "cheechako" would fold. However, there was a war on, and so Usibelli convinced military officials at Ladd Field near Fairbanks to give him the contract to supply their powerplant; from there, Usibelli coal was off and running.

Emil came to Washington state from Italy in 1907 at the age of 14 but then moved to Alaska in 1935. Arriving in the Last Frontier, he worked as an underground miner in the Evan Jones Mine near Palmer and then, a year later, moved to Suntrana to work underground for the Healy River Coal Corp.

After being laid off due to injuries sustained while mining, Emil began a logging operation to supply timber to the Suntrana mine.

During World War II, Ladd Army Airfield in Fairbanks became an important military base. To reduce its dependency on a single fuel supplier, the military began exploration work on military coal reserves east of Suntrana mine, in an area known as Healy Creek Valley.

According to a history of the Usibelli's from the Usibelli Coal Mine Company, Emil was possibly hired by the military to explore the area around Healy Creek Valley and from there decided to get into mining for coal.

Either way, he was among several who obtained coal leases from the U.S. Army with a one-year contract to supply 10,000 tons of coal to the Ladd base – now called Fort Wainwright. After that, he began operations with a small international TD-40 dozer and a converted GMC logging truck.

The dozer was used to push the overburden off the coal outcrops and then push the exposed coal into the truck bed, his methods were viewed with heavy skepticism by the underground miners, but regardless, he met his contractual obligations.

In 1948, he bought his partner's (Thad Sandford) share of the business, and Usibelli Coal Mine was incorporated under the laws of the Territory of Alaska.

Persevering through tough times in the early years of the business, upgrading equipment and facilities while also working to make his surface mining methods more efficient and cost-effective, the Usibelli Coal Mine continued to grow.

During the 1950s, UCM gradually increased its share of the military's growing coal demand and, in 1954, began its first commercial sales to utilities in the Fairbanks area.

After the passing of Lathrop in 1950, the Suntrana mine had been in the care of Anchorage investors and was all but stagnant until 1961 when UCM, interested in Suntrana's coal loading facility, bought the operation.

Born in the coal-mining town of Suntrana on Dec. 28, 1938, Joseph Usibelli moved to Fairbanks for high school when his parents separated, eventually earning a civil engineering degree at the University of Fairbanks in 1959.

In late March 1964, Joe was driving home to Alaska from Stanford when border guards told him his father had been killed in a mine accident just hours before the Good Friday earthquake.

Due to his father's passing, 25-year-old Joe suddenly found himself in charge of a multi-million-dollar operation with annual sales of just under 400,000 tons of coal.

Quickly proving himself capable, over the next two decades, sales more than doubled to 800,000 tons per year.

In that time, Usibelli's customers grew to a Fairbanks municipal utilities plant on the banks of the Chena River, the University of Alaska plants, a large plant at Eielson Air Force Base, Clear Air Force Base near Healy, the old Ladd Field plant later renamed to Fort Wainwright, and Golden Valley Electric Association which served the outlying areas around Fairbanks.

Throughout his professional career, Joe modernized the mine's equipment and launched new mining methods. Furthermore, the mine continued to expand with UCM purchasing the neighboring Vitro mine in 1971 and finally becoming the sole producing coal mine in Alaska.

During the late 1970s, UCM began the process of moving operations from the Healy Creek valley to the Poker Flats area in the Hoseanna Creek Valley, which it ran until 2002.

Beyond the exponential growth of the company, Joe, along with his wife Peggy Shumaker, shared their success and contributed greatly to Alaska, especially his alma mater.

As a 1959 graduate of the University of Fairbanks, as well as a member of the first varsity rifle team, Joe carried a philosophy of giving back.

"He was a testament to the power of individual philanthropy and believed that those who give their resources create vibrant communities," wrote University of Alaska President Pat Pitney. "Joe was dedicated to creating a vibrant UAF, a vibrant community in Healy and was supportive of the families who lived there and worked at Usibelli Coal Mine. He was also dedicated to the successful restoration of the natural landscape on land previously mined well before it was required by the federal government."

On May 12, 2022, after a lifetime of building a legacy that will be cemented in the annals of Alaska, Joe passed away at the age of 83 after an unspecified long-term illness.

After leaving UCM in the capable hands of son Joe Usibelli Jr. in 1987, Usibelli Sr. spent his final decades giving back.

Words to admire and perfectly define the Alaskan legend. 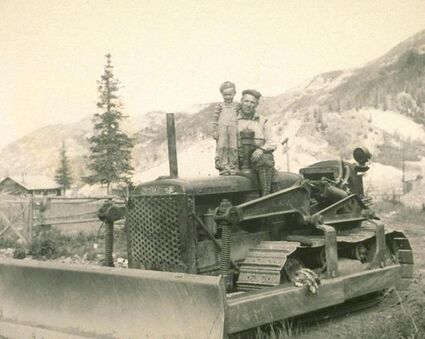 Joseph Usibelli Sr., with father Emil Usibelli, on the first dozer in Suntrana around 1942.

"My dad was a visionary and a pioneer in Alaska's mining trade," said Usibelli Coal Mine President Joe Usibelli Jr. "He was recognized for his ingenuity, generosity, and his deep love for his household, workers, and group. Together, we mourn his loss."

More than just his philanthropic spirit, he will also be remembered for his love of family, his tireless enthusiasm, his success in building an important energy company that supported and supports many families, and for his life-long commitment to Alaska.