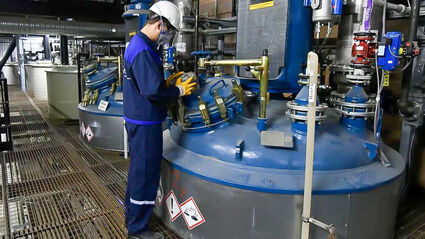 For over three decades, Neo has avoided direct involvement in the mining sector; seeking to remain a specialty chemicals and materials producer. However, rising demand for rare earth magnets has prompted the company to obtain its own assets as a way to keep costs down.

Located roughly 35 miles (60 kilometers) from the international airport in the town of Kangerlussuaq, Sarfartoq would provide Neo with a rare earths project that is close to North Atlantic tidewater between the U.S. and Europe.

"We are very pleased to have signed this agreement with a global leader in the production of advanced materials," said Hudson Resources President Jim Cambon. "As the world faces critical shortages of rare earth elements outside of China, we are pleased to help bring the Sarfartoq project a step closer to commercial reality."

Completion of the sale is subject to various conditions, including approval from the Greenland government, for the transaction to be finalized. It is expected to take approximately six months for this authorization and approval from the TSX Venture Exchange on the part of Hudson. Once under Neo's banner, the advanced industrial materials company will assign its rights to a special-purpose entity (SPE) controlled by Neo that would hold the rights and continue exploration and ultimately extraction of the rare earth elements at Sarfartoq.

The key terms of the agreement are as follows:

• Hudson will receive a nonrefundable initial cash payment of US$250,000 upon signing the agreement.

• Upon receipt of approval from the Greenland government, Hudson will transfer the license to Neo or the SPE.

• Hudson will receive an additional US$3.25 million upon closing of the transaction.

• If, within five years from the date of closing the transaction, (1) the SPE transfers the license, or there is a change of control of the SPE pursuant to an acquisition or merger, then Hudson will receive 5% of the total consideration received by the SPE in connection with such transfer, or, (2) the SPE conducts an initial public offering on a stock exchange, then Hudson will receive 5% of the fully diluted equity interests in the SPE immediately prior to the IPO.

The agreement covers the large Sarfartoq carbonatite complex that hosts Hudson's ST1 REE project as well as the Nukittooq niobium-tantalum project. In addition to the PEA conducted by Hudson for Sarfartoq, 3,000 meters east of ST1 is an even more rich region of neodymium.

Exploration carried out by Hudson showed that it contains up to 45% neodymium of the total rare earths, making it the highest known neodymium to TREO ratio in the world.

"Neo continuously pursues supply chain optionality in order to ensure that our customers have a dependable supply of engineered rare earth products," said Neo Performance Materials President and CEO Constantine Karayannopoulos. "Once in production, this project will significantly increase the diversity of global rare earth supply for our processing facilities around the world."

You can learn more about Neo Performance and its ongoing US-European REE supply chain efforts at Collaborating to produce US rare earths in the March 3, 2021 edition of Metal Tech News. 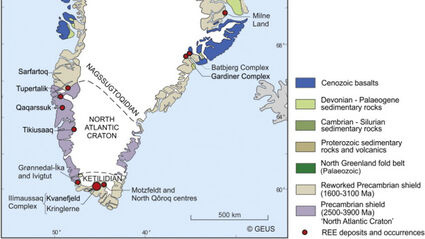 A map detailing the potential rare earth element resources of Greenland; Sarfartoq is on the western side. Click the image to see the full map.

"It also is another step in our Magnets-to-Mine vertical integration strategy," continued Karayannopoulos. "Based on our significant experience in assessing strategic mineral resources around the world, we believe the Sarfartoq resource in Greenland is a strategic asset that uniquely complements Neo's European rare earth magnet growth strategy."

Aside from this agreement with Hudson, Neo has also been pursuing plans to break ground on a greenfield rare earth permanent magnet manufacturing plant in Estonia that is intended to provide European manufacturers with the permanent magnets needed for electric and hybrid vehicles, wind turbines, and energy-saving electric motors and pumps.

"This resource would supplement our current supply of rare earth concentrate from Energy Fuels in the United States," said the Neo CEO. "We are very confident and supportive of the Greenlandic government's vision for sustainable-focused mining as the driver of their economic development, job creation, and growth. We are looking forward to working with Greenland to responsibly develop this resource into a producing mine, of which Neo would be the primary customer."