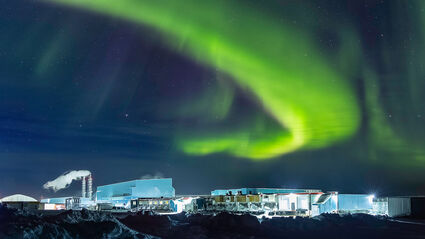 The northern lights shine bright above the Meliadine gold mine. Agnico Eagle, owner of Meliadine, has budgeted C$120.7 million for mineral exploration in Nunavut this year.

With mineral exploration expenditures nearly doubling over the past year, Nunavut has dethroned Yukon as the most popular Canadian territory to discover and expand deposits of industrial, precious, and critical minerals.

According to preliminary estimates published by Natural Resources Canada, roughly C$232.4 million (US$173.7 million) will be spent on exploration and deposit evaluation in Nunavut this year, a 95% leap from over the C$119.2 million (US$89.1 million) invested in evaluating the territory's mineral potential in 2021.

While Nunavut was by far the most popular destination, all three Canadian territories experienced increases in mineral exploration spending that outpaced the national average.

Combined, roughly C$509.8 million is projected to be spent on mineral exploration and deposit evaluation across Canada's North during 2022, a roughly 46% jump over the C$348.5 million invested in exploring the territories last year.

Even with mineral exploration heating up across Canada's North, the 2022 expenditures only account for about 12% of the total exploration spending in Canada despite accounting for 40% of the nation's landmass and well-established mineral endowment.

The NWT & Nunavut Chamber of Mines believes that more can and should be done to tap into the North of 60 territories' underexplored potential to supply the minerals and metals critical to Canada and the rest of the world.

"While exploration in the north has made a positive shift in recent years, the North is still not seeing the push towards critical minerals as incented by the federal exploration tax credit," said NWT & Nunavut Chamber of Mines President Kenny Ruptash. "Our Chamber continues to join with all three territorial governments on the creation of an exploration tax credit for all minerals in northern Canada dubbed the North of 60 Mineral Exploration Tax Credit (N60METC)."

The surge in mineral exploration spending in Nunavut is being fueled by enormous investments being made by Agnico Eagle Mines Ltd. at its two operating and one idling gold mine in Nunavut.

It is expected that Agnico will invest somewhere around C$120.7 million (US$90.2 million) on exploration-related activities at Hope Bay, Meadowbank Complex, and Meliadine this year.

This heavy investment backs Agnico's long-held view of Nunavut as "a politically attractive and stable jurisdiction with enormous geological potential."

At C$75.2 million (US$56.2 million), the exploration program at Hope Bay is the largest for Agnico and Nunavut this year.

After gaining ownership of the Hope Bay gold mine through the acquisition of TMAC Resources Inc. in 2021, Agnico opted to idle down operations in order to invest the time and money needed to investigate larger production scenarios that will integrate the results of an expansive exploration campaign and improved mining infrastructure.

While building the reserves and mine infrastructure needed to achieve optimal production at Hope Bay, Agnico made more modest yet significant investments at its two operating mines in Nunavut.

At Amaruq, a satellite mine that is part of the Meadowbank Complex, Agnico budgeted C$26.1 (US$19.5 million) for a planned 61,800 meters of exploration and resource conversion drilling during 2022.

At Meliadine, the gold mining company invested C$19.4 million (US$14.5 million) into increasing mineral reserves and resources that will extend the life of this roughly 1,000-ounce-per-day gold mining operation beyond 2032.

"With the company's Meliadine mine and Meadowbank complex (including the Amaruq satellite deposit), together with the Hope Bay project and other exploration projects, Nunavut is a strategic operating platform that builds on the company's established infrastructure, access roads, procurement synergies and the region's tremendous geological potential, with the ability to generate strong gold production and cash flows over several decades," Agnico inked in an August exploration update.

With the enormous investments made by Agnico, the search for gold is dominating the mineral exploration expenditures in Nunavut.

NRCan estimates that roughly 61% of the C$185.1 million (C$138.4 million) spent on exploration in Yukon this year is being invested by juniors.

Most juniors explored for and expanded deposits of the gold that is a legendary hallmark of the home to the Klondike. Others, however, explored for silver in and around the historic and rejuvenated Keno Hill district, zinc in the famed Selwyn Basin, copper in the Dawson Range, and nickel-platinum group metal projects in the southwestern part of the territory.

One Yukon-focused junior explorer stirred up excitement among investors and analysts this year that is reminiscent of the rush to Yukon's White Gold District a little more than a decade ago.

This junior with deep roots in the Yukon, Snowline Gold Corp, hit 318.8 meters averaging 2.55 grams per ton gold with drilling in the Valley zone on its Rouge property this year.

This extraordinary zone of gold mineralization has been followed up with multiple holes that have cut intercepts measured in hundreds of meters of well above 1 g/t gold. In addition to the discovery itself, this project further broadens Yukon's storied gold potential into the Selwyn Basin.

With momentum at its back, Snowline more than doubled its land position in the Selwyn Basin area to 254,000 hectares (688,340 acres) by staking and acquiring gold exploration properties in this eastern Yukon region.

"We've got multiple projects moving ahead, multiple projects operating and others that are nearing that stage. So, the Yukon is proving to be a place where things can happen," said Snowline Gold CEO Scott Berdahl.

Of the total mineral exploration spending in the Yukon this year, C$129.6 million (US$96.9 million) is being invested in precious metals exploration, C$55.4 million (US$41.4 million) on base metals, and a minimal amount on other minerals.

Northwest Territories, which was the glimmering gem of Canadian mineral exploration when diamonds were discovered in the 1990s, has lost its luster over the past two decades.

Despite rising at a higher rate than the Canadian average, the 2022 investments in NWT mineral exploration only make up about 2.2% of the nation's total.

Territorial officials see the potential for a new exploration rush to NWT, this time for minerals critical to the transition to clean energy and transportation.

"From our beginnings in base metals like zinc, lead, and gold, we progressed to becoming the birthplace of ethically sourced diamonds in the 1990s," Northwest Territories Minister of Industry, Tourism and Investment Caroline Wawzonek said during a June 17 address at the Arctic Development Expo in Inuvik, NWT. "The breadth of our mineral potential is expanding even further, thanks to the presence of green economy metals like rare earth minerals, lithium, nickel, and cobalt needed to meet the demand of clean technologies along with many other resources recognized as critical or strategic minerals and metals."

The exploration for critical minerals is not new to NWT. In fact, the territory hosts Canada's first and only rare earths mine and is home to other advanced exploration projects enriched with bismuth, cobalt, copper, tungsten, zinc, and other metals critical to low-carbon energy, electric vehicles, and digital technologies. In addition, earlier staged exploration projects contain other critical metals such as beryllium, gallium, germanium, lithium, nickel, and vanadium.

Wawzonek told North of 60 Mining News that 23 of 31 minerals that have been deemed critical by the Canadian government have been identified in deposits and occurrences across NWT.

And this vast northern territory, which is roughly twice the size of Texas, remains largely underexplored.

To leverage the known endowment and encourage exploration for what is yet unknown, NWT officials are developing an action plan to promote the exploration and development of critical mineral resources in the territory.

This includes working with the federal government to help establish the infrastructure needed to link NWT critical minerals to markets.

"To transition into the next chapter of our storied mining history with our rich critical mineral potential, we need strong partners at the federal level and continue to make the case for significant infrastructure investment. By doing this, we will be able to capitalize on our true economic potential," said Northwest Territories Premier Caroline Cochrane.

As Ottawa seeks to leverage the nation's mineral riches and mining know-how to position Canada as a powerhouse supplier of the minerals critical to the clean energy transition, all three territories are encouraging the federal government to make a modest investment in the North that could unlock tremendous value.

One of the primary tools that has established Canada as the global headquarters for mining and mineral exploration is the Mineral Exploration Tax Credit. Under this program, mineral exploration companies can carry out "flow-through financings" that allow Canadian investors to apply their participation in the financings against their own federal income taxes. The flow-through money raised must be applied to exploration within Canada.

Ottawa has recently doubled down on this program with a new Critical Minerals Exploration Tax Credit (CMETC) that allows up to 30% of exploration for a list of 15 minerals critical to clean energy and zero-emissions vehicles to qualify for a federal tax credit.

While the original and critical mineral tax credits apply to exploration in Canada's territories, flow-through funds raised under these programs tend to be invested in the provinces.

There are a couple of primary reasons for this. First, it is less expensive to explore in the more road-accessible southern Canada jurisdictions, and many provinces add their own tax credits that further leverage the federal incentives – an option not viable for the territories.

"This means that those provinces can easily outcompete the North in attracting mineral exploration investment," NWT & Nunavut Chamber of Mines Executive Director Tom Hoefer told Mining News in an email.

To level the playing field, the NWT & Nunavut Chamber of Mines, all three Canadian territories, and the Prospectors & Developers Association of Canada (PDAC) have asked Ottawa to create a special 40% North of 60 Mineral Exploration Tax Credit.

"There has been work done within the federal government that confirms a N60METC would help the North, and not be overly burdensome to Canada," Hoefer said.

And the high probability of globally significant mineral discoveries across the North offers tremendous upside for this investment to encourage northern exploration. 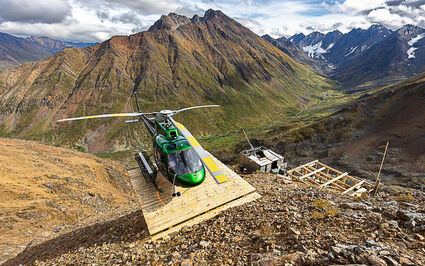 Snowline Gold captured investor and analyst attention with a 319-meter drill intercept averaging 2.55 g/t gold in the Valley Zone on its Rogue property in the Yukon.

"Since it is under-explored and under-mapped, it has undergone less exploration and the odds of discovery are improved. It's why we became the world's third largest diamond producer within 12 years of discovery; it's why we are now the first rare earth element miner in Canada; it's why we have world class iron ore deposits," Hoefer explained. "Who knows what else we find when we have strong exploration investment."

The N60METC proponents had hoped that this potential upside would sway federal officials to include the tax credit in the 2022 federal budget. While the CMETC was included in this year's budget, the N60METC was not.

Canada's territories and trade organizations that represent them, however, have not given up on pushing for tax credits and other federal programs that would unlock the mineral wealth known to exist North of 60.

"The reality is that any mining development in Northern Canada is critical to our economies, and we need help on all fronts from government," Hoefer concluded.