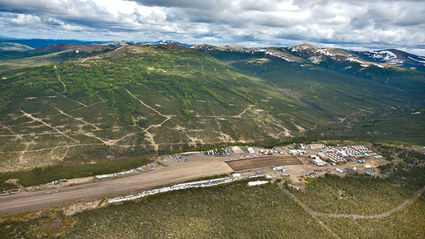 Novagold Resources and Barrick Gold recently received the two major federal permits needed to develop a mine at their 39-million-ounce Donlin Gold project in Southwest Alaska.

The Donlin Project took one step closer to becoming the next major mine in Alaska when on Aug. 13, the Army Corps of Engineers and the Department of the Interior signed off on a record of decision regarding the discharge of dredged material and a pipeline right of way as part of the development of the project.

In today's political environment, the development of any resource project requires a bevy of permits from diverse agencies and entities, and that entails a mountain of printed documents and a swamp of red tape. Prior administrations have had no reluctance compounding the burden, and by extension the costs of any project. Where the administrations of the past have failed to break the camel's back, the federal courts at the trial level and the circuit level have felt free to pile on.

It is no small wonder that the incumbent administration saw fit to promulgate an Executive Order intended to eliminate inefficiencies in project authorization. Indubitably, the labors of an endless stream of bureaucrats in the past have hobbled otherwise attractive projects by demanding pseudo-studies, many of which are cut-and-paste products that are destined for the land of forgotten bookshelves; however, they slow and occasionally kill projects, with the result that needed commodities must be produced beyond our shores.

Approval of the Donlin project, thought to be the largest undeveloped gold deposit in the world, represents a huge milestone, not just for the owners, Barrick and Novagold, but also for Alaska and for the nation. In the construction phase alone, it will provide a reportedly 3,000 jobs, many of which will be drawn from local remote communities in Southwest Alaska; and when it becomes a producing mine, it will require some 1,400 well-paid mineworkers for decades to come.

More significantly, it will constitute a precedent for the development of other projects in the state. Most knowledgeable people recognize that Alaska hosts innumerable targets of a long list of commodities many of which are essential for our national security and economic health. Global mining companies, anxious to seek those resources often shy away from Alaska because of the permitting nightmare involved.

The fact that this administration wants to improve the national investment infrastructure by streamlining the permitting process bodes well, not only for America, but also for the local communities, the state and the global economy.

Gold is not just for pretty baubles anymore. Gold is an essential component for everything from electronics to climate-controlled construction projects. In periods of low inflation, as we are currently experiencing, the price of gold as a commodity remains relatively stable. As the world supply of gold increases, its cost may tend to slip, making it even more useful for industrial applications. Inversely, if America is allowed to slip back into an inflationary spiral, the nominal price of gold may increase. Either way the development of the Donlin project justifies itself.

The popular press takes great delight in savaging President Trump, at his invitation, from every side; but there can be no dispute that he has done more in his less-than-two years-in-office to spark industrial growth than any of his predecessors have done since the Second World War, and with far less blood in the streets.

If the Donlin Project can be permitted, perhaps other projects can make it through the chairs as well. All Alaskans should pause and reflect on this accomplishment. If this development is not sufficient to make America great again, it may, at least, renew the lifeblood of our state. Thanks to all involved for a job well done.