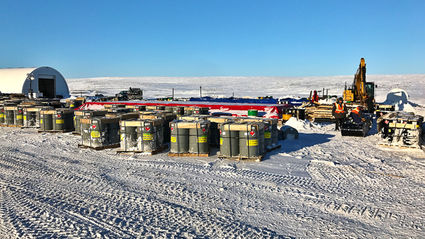 Storing fuel at Committee Bay in 2017 allowed Auryn Resources to get an early start on 2018 exploration at this expansive gold property in Nunavut.

Auryn closed a US$9.8 million financing in March and another C$7.3 million flow-through financing in August, which are helping to fund significant 2018 exploration across the company's portfolio. Goldcorp Inc., already a major Auryn shareholder, participated in both financings and maintains a roughly 12.4 percent interest in the explorer.

About half of the 2018 drilling targeted Aiviq, a high-grade gold discovery reported by Auryn in 2017 about 7.5 miles (12 kilometers) north of Three Bluffs. The gold identified at Aiviq is situated along a regional shear zone that is defined by a 7,000-meter-long gold-in-till anomaly.

About 3,200 meters of diamond drilling at Aiviq stepped out from this discovery to test extensions of the gold mineralization. Auryn also completed 1,800 meters of rotary air blast exploration drilling with three fences across the shear zone to the northeast.

This year's exploration at Committee Bay also included high-resolution till sampling planned for the West Plains and Anuri prospects, both of which have historical high-grade drill intercepts. The aim of this surface work is to continue to develop the next series of drill targets as the company's technical team believes these prospects have excellent potential for a major discovery.

Regional till sampling on wider spacing will be carried out to the northeast of the Inuk prospect to determine the potential for additional discoveries in the northeast portion of the roughly 300-kilometer- (185 miles) long Committee Bay greenstone belt being explored by Auryn.

Auryn picked up this property between Agnico Eagle's Meadowbank Mine and Meliadine Mine project early in 2017 and carried out the first systematic exploration of the property last year. This program, which included regional till and rock sampling, identified eight priority targets for further sampling to refine targets for exploration drilling.

In northwestern British Columbia, Auryn is working to unlock the value of the high-grade gold and silver at its Homestake Ridge property.

A 27-hole drill program carried out last year identified the geometry of the high-grade mineralization at the South Reef zone, remains open to the northwest, and discovered an emerging parallel high-grade structure (Upper zone) 175 meters to the north of the main zone.

The goal of a roughly 3,000-meter drill program at Homestake Ridge this year is to follow-up on these intercepts along strike of both structures with the objective of significantly expanding the known mineralization.

Auryn plans to incorporate the results from its exploration into a preliminary economic assessment of the high-grade precious metals project.