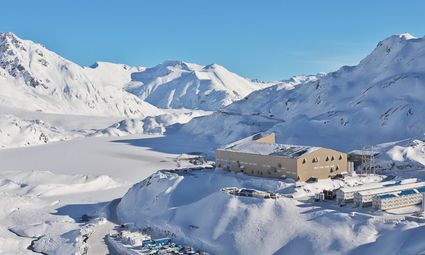 Pretium Resources' Brucejack Mine produced 228,173 ounces of gold during the first nine months of commercial operation.

Pretium achieved commercial production at Brucejack in mid-2017, and the operation produced 228,173 ounces of gold during the first nine months of operation.

While the mill outperformed its 2,700-metric-ton-per-day capacity, the gold grades being fed into it were lower than expected. To rectify this, Pretium implemented a grade-control program to optimize stope shapes resulting in reduced dilution and optimized grade to the mill. This program has improved short-term grade prediction with drilling, sampling and local modelling.

The success of this work is reflected in the 111,340 oz of gold produced during the second quarter from 236,990 metric tons (2,604 metric tons per day) of ore milled that averaged 14.9 grams per metric ton gold.

In addition to better defining the reserves, Pretium confirmed the presence of Brucejack-style mineralization starting from the eastern edge of the Valley of the Kings, the high-grade gold deposit currently being mined, to beneath Flow Dome, a gold zone about 1,000 meters east.

Surface drilling encountered bonanza grade gold at Flow Dome in 2015. Highlights from that program include 2.05 meters of 2,100 grams (67.52 ounces) per metric ton gold in hole SU-688.

Holes VU-820 and VU-911, each more than 1,500 meters long, tested mineralization continuity between Valley of the Kings and Flow Dome, while assessing the potential for a porphyry source at depth.

Pretium also carried out a grassroots exploration program that follows up on the regional sampling, mapping, prospecting and geophysics previously carried out across the 1,250-square-kilometer (482 square miles) Brucejack property.

The company said this work has identified several distinct areas that have the potential to host mineralized zones like the epithermal mineralization being mined from the Valley of the Kings and precious metals enriched volcanogenic massive sulfide mineralization found at Eskay Creek, a past-producing, high-grade gold mine about 25 kilometers (16 miles) to the northwest. High-priority targets were tested during a regional exploration drill program this summer.

A roughly C$3 million flow-through private placement that closed in July was used to partly fund the grassroots exploration program.