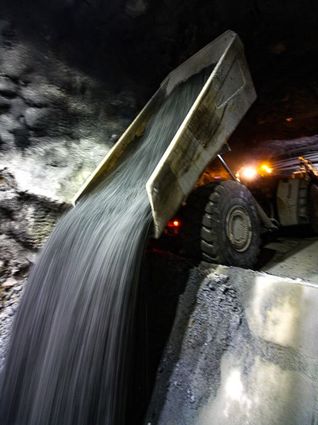 An underground truck dumps ore in a feeder going to the mill at Northern Star Resources' recently acquired Pogo gold mine in Alaska.

Thanks to its own rich mineral endowment, Australia is a juggernaut in the world of mining, especially across the Southern Hemisphere. Over the past couple of years, however, a growing number of Aussie mining companies are looking north to Alaska, another minerals-rich land way north of the Equator.

"Alaska certainly has got the attention of Australia and Australian investors...it is certainly the land of giant deposits," Frazer Tabeart, managing director of PolarX told Kitco News during a July interview.

PolarX is exploring a high-grade gold-copper skarn deposit and is vectoring in on potential porphyries, the type of deposit with potential to be one of the giants Tabeart is talking about.

PolarX is not the only Australian mineral explorer that sees Alaska as the land of giants.

"The Pebble Mine project for example is the largest undeveloped gold and copper resource on the planet," Dennis Fry, director, Nova Minerals Ltd. told Mining News.

Nova Minerals recently optioned Estelle, a gold-copper property about 125 miles north and in the same assemblage of rocks as Pebble.

The Aussie explorer points out that Pebble is not the only world-class mineral project in Alaska, noting the 39-million-ounce Donlin Gold mine project; 12.5-million-ounce Livengood gold project; Red Dog, the world's largest zinc producing mine; and Fort Knox, Pogo, Greens Creek and Kensington mines as examples of the state's rich mineral endowment.

Mid-tier Australian gold producer Northern Star Resources now owns one of these world-class assets, the Pogo Mine in Interior Alaska.

Pogo currently has roughly 4.1 million ounces of gold in resources and reserves, which means Northern Star is paying around US$63/oz of gold already found there and is getting an established underground mining operation to go with it.

Northern Star Executive Chairman Bill Beament said the acquisition was made even more compelling by the fact that this operation is in Alaska, a jurisdiction that ranks in the top 10 for investment attractiveness and top five for mineral potential in the Fraser Institute Annual Survey of Mining Companies 2017.

"Alaska is simply one of the great mining jurisdictions of the world," he told analysts and investors on Aug. 30.

Northern Star plans to leverage its underground mining experience to boost gold reserves and production at Pogo in the coming years.

To accomplish this, the Australian company plans to invest in intensive resource expansion and upgrade drilling over the coming months with the goal of having Australian Joint Ore Reserves Committee-compliant resources and reserves calculated in 2019.

"By investing in exploration and development, we are confident we can grow the resource, production and mine life for the benefit of the mine's employees, contractors, the local community and our shareholders" the Northern Star chairman said.

While Alaska's rich mineral wealth and jurisdiction safety are primary draws, these are not the only reasons Australian mining companies looking north of the equator are choosing to invest in the Last Frontier.

One primary attraction is how much easier and less expensive it is to pick up good mineral properties in Alaska than in other northern mining jurisdictions such as Canada.

This is something White Rock Minerals was able to leverage at Red Mountain, a zinc-rich volcanogenic massive sulfide deposit along the north slopes of the Alaska Range about 60 miles south of Fairbanks.

Among the first things White Rock did was to expand the project to roughly 35,300 acres of state mining claims that encompass some 30 exploration targets.

The company also leveraged the 19,000 meters or so of drilling previously completed at Red Mountain to calculate a resource for the two main deposits – Dry Creek and West Tundra Flats – that met the minerals reporting criteria of the Australian Joint Ore Reserves Committee.

An inaugural White Rock drill program on the property is not only cutting exceptionally high-grade zinc and silver at the known deposits but has tapped similar mineralization in outlying targets never before drilled, strengthening the Australian company's convictions about the potential at Red Mountain.

"(S)uch high-grade mineralization at the three main prospects defined to date bodes well for future high-grade discoveries, with the Red Mountain project shaping up to be a high-grade zinc VMS camp of the future," said Gill.

It also attracted the attention of Sandfire Resources, a mid-tier Australian mining company that operates the high-grade DeGrussa copper-gold mine in Western Australia.

Sandfire invested AU$2.5 million in 2018 to acquire roughly 14.2 percent interest in White Rock, part of a deal that gives the miner an option to earn up to a 90 percent stake in Red Mountain by investing AU$30 million into the exciting Alaska project and then funding a feasibility study.

PolarX Executive Director Jason Berton believes the huge vacancies of highly prospective lands across a five-star mineral jurisdiction like Alaska is largely due to most western mineral exploration companies being headquartered in Canada and Australia, countries with mining-centric economies and stock exchanges tailored to raising money for mining ventures, funds that tend to be invested close to home.

"I think locally in Canada there's already a lot of Canadians exploring at home, which reduces the number of opportunities available for foreign explorers to enter. When you look over the Canadian border into Alaska, you see the same rocks but far fewer companies exploring them," PolarX Executive Director Jason Berton told Mining News. "There's nothing really different about the geology but on one side of the border there's plenty of mining development and on the other very little. That's the scenario I look for, massive mineral prospectivity but less competition."

Berton said projects like this are nearly impossible to come by in Australia.

"My particular focus is copper and gold, which also gets a lot of attention amongst local (Australian) explorers but with the exception of a few projects, they lack the scale, continuity of tenure and upside potential that you can find in Alaska," he explained.

Alaska also holds one other huge advantage over just about any other mining jurisdiction on the globe – the Alaska Native Claims Settlement Act, or ANCSA.

"The U. S., I think, handled the Alaska Native challenge very well, when I compare that to how native title (as we call it) is managed in Australia. Canada too seems to struggle with this very key issue of respect and engagement with the local peoples," Gill said.

Beyond settling ownership of lands, this 1971 landmark created 12 Alaska Regional Native corporations that are well organized and often business partners in mining ventures within their respective regions of the state.

South32, an Australia-based major spun out of BHP Billiton in 2015, is working with one such Alaska Native corporation as it is considering an option that would give it a 50 percent interest in a project that covers one of the richest known undeveloped mining districts on Earth.

Early in 2107, South32 cut a deal with Trilogy Metals Inc. for an option to acquire up to a 50 percent interest in the Upper Kobuk Mineral Projects, UKMP, a large land package that blankets most of the Ambler Mining District in Northwest Alaska, for US$150 million.

To keep this option in good standing, South32 is investing US$30 million into UKMP over three years, which includes US$10 million programs in both 2017 and 2018.

UKMP is a district-scale project that includes a block of state mining claims held by Trilogy that stretches 70 miles (110 kilometers) across the Ambler district and an adjacent land package owned by NANA, the Alaska Native regional corporation that represents the Inupiat people of Northwest Alaska.

Arctic, along with more than a dozen other VMS deposits and prospects rich in copper, zinc, lead, gold and silver are found on the Trilogy claims. Bornite and other copper-rich prospects are located on the NANA lands.

A 2011 agreement brought these two high-grade Ambler district properties together into what is now known as UKMP.

NANA, which has an option to be a 16-25 percent equity partner in the project or receive a 15 percent net proceeds royalty from any mines developed on the 353,000-acre land package, sees the ample funds and mining knowhow South32 brings to the partnership as a positive step for UKMP.

"NANA looks forward to partnering with Trilogy and South32 on this new phase of exploration," said NANA President and CEO Wayne Westlake. "Our region has benefited from responsible resource development, and we value working with companies that advance our land's mineral potential and create shareholder value, while respecting our traditional subsistence lifestyle."

NANA also owns the lands currently being mined at Red Dog and is a partner with Teck Resources Ltd. in the world-class zinc mine.

These types of partnerships demonstrate the strength of ANCSA and the corporations that emerged from the visionary Native land settlement.

Word getting around Oz

Will the success of the current band of Aussie explorers in Alaska draw other Down Under mining companies to the Last Frontier? All the Australian mining executives Mining News has spoken with say, "Yes." 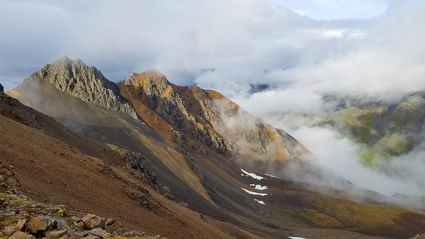 Australia-based PolarX is exploring a high-grade gold-copper skarn and is vectoring in on potentially much larger porphyry deposits at its Alaska Range project.

"In mining you go where the opportunities present themselves and if they fit the business strategy and risk profile," said White Rock Minerals CEO Gill.

And Alaska checks off a lot of the boxes for Australian mining companies looking abroad.

Word is getting around Oz about the success Australian mining companies are having in Alaska, which is likely to attract more investment as Aussie mining companies and investors become increasingly familiar with the land of the giant deposits.

Gill, who spends a lot of time educating Australians about Alaska, said, "Success will beget success, and others may well follow."