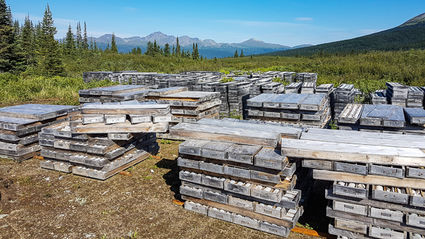 Kutcho Copper Corp. entered British Columbia's minerals exploration scene in 2017 and is already considering the feasibility of developing a mine in the province's northern reaches. Under its former name, Desert Star Resources, this new B.C. explorer cut a deal last June to acquire the high-grade Kutcho copper-zinc-silver-gold project from Capstone Mining Corp.

Located about 100 kilometers (60 miles) east of Dease Lake, the Kutcho property hosts three known Kuroko-type volcanic massive sulfide deposits along an east-west trend. The largest, Main, comes to surface at the east end of the trend, with Sumac and Esso each getting deeper to the west.

A prefeasibility study updated at the time of the acquisition considers the development of a 2,500-metric-ton-per-day operation that would produce 378 million pounds of copper and 473 million lb of zinc, plus by-product precious metals over a 12-year mine life.

Due to this adjustment, there is a large portion of resources in the Kutcho Copper deposits that can be upgraded to higher confidence categories and potentially reserves.

With the goal of advancing this project to the feasibility stage by the end of 2019, this year's program includes additional geotechnical work on the deposits; a drill program to upgrade a portion of the inferred mineral resources to the measured and indicated categories, which could then be converted to reserves when the feasibility study is completed; additional metallurgical work; and environmental baseline studies.

In addition to infill drilling, the 2018 drill program is testing exploration targets on the Kutcho property.

A C$4.1 million flow-through financing that closed in August is helping to fund this work. Kutcho Copper also received a US$3.5 million (about C$4.6 million) advanced payment from Wheaton Precious Metals Corp., which agreed to forward Kutcho US$7 million for feasibility work. Kutcho received an initial US$3.5 million early in 2018. These advanced payments are part of a larger, roughly C$100 million, financing package that helped Kutcho acquire, explore and develop the namesake property.

The Kutcho Copper feasibility study is slated for completion in the second quarter of 2019.