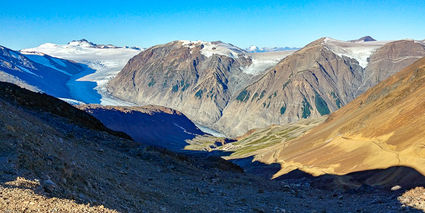 IDM Mining Ltd. is focused on developing British Columbia's next underground gold mine at the company's Red Mountain project a few miles east of Stewart. A feasibility study completed in 2017 outlines plans for a 1,000-metric-ton-per-day mill to process high-grade ore from the Red Mountain underground mine that is expected to average roughly 78,000 ounces of gold per year over an initial six-year mine-life.

In addition, the underground mine project hosts 316,000 metric tons of inferred resource averaging 6.04 g/t (61,400 oz) gold and 7.6 g/t (77,200 oz) silver. This marks a roughly 5 percent decrease in this category, as most of the inferred resources in three planned mining zones – Marc, AV and JW – were upgraded to the higher confidence measured and indicated category. Roughly 82 percent of the current inferred resources are found in new zones – Smit, SF, Bray, Chicka and Cambria Zones – indicating the potential for future expansion at Red Mountain.

The new mineral resource estimate, along with improved geological interpretation and engineering optimization work, is being incorporated into an updated feasibility study.

The environmental assessment process and feasibility study is expected in the fourth quarter, paving the way for developing a high-grade gold-silver mine at Red Mountain.

"(W)e believe that Red Mountain will be the next underground gold mine in B.C.," said IDM Mining President and CEO Rob McLeod.

While advancing toward this goal, IDM Mining explored Money Rock, a zone at Lost Valley target about 4,000 meters south of the Red Mountain resource.

Trenching completed this year at Money Rock followed up on discovery sampling carried out in 2016.

The most recent results are from 51 panel samples collected on one-meter intervals from the Money Rock structure. These samples averaged 9.81 g/t gold and 101.4 g/t silver over 51 meters of strike, including 2 meters averaging 13.41 g/t gold and 1,531 g/t gold. The highest grade one-meter samples returned 49.43 g/t gold and 2,617 g/t silver.

During 2016, three drill holes from a single drill pad were completed at Money Rock. Hole LV16-01 cut one meter 3 g/t gold and 23.8 g/t silver and LV16-02 intersected 1.2 meters averaging 4.63 g/t gold and 90.90 g/t silver. All three holes intersected a post-mineralization dyke where the zone was projected to occur from surface. IDM plans target areas to the west and east of this dyke with future drilling.

Surface mapping and sampling also was carried out this year at Red Mountain, including targets at Lost Valley.