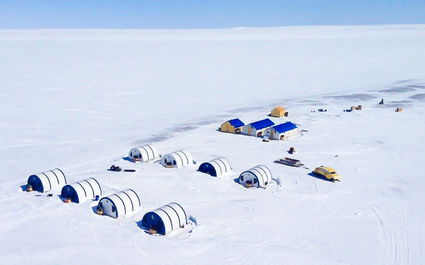 Chuck Fipke, the renowned geologist that made the diamond discoveries that led to Ekati and the other mines in Northwest Territories, is an advisor and the largest shareholder of Dunnedin.

"The abundance and quality of diamond indicator minerals at Dunnedin's Kahuna project is exceptional and bodes well for the potential discovery of new diamond sources," said Fipke.

While diamonds are Dunnedin Ventures' primary Kahuna target, this large property is also highly prospective for gold deposits similar to those found on Agnico Eagle Mines' Meliadine project immediately to the southwest.

To keep its focus on the diamonds, Dunnedin spun-out Solstice Gold Corp., a gold-focused exploration company with full rights to 66 claims and 50 percent of 12 other claims covering the larger Kahuna project.

While Solstice explores for gold, Dunnedin set out to test the more than 40 diamondiferous kimberlite targets it has identified at Kahuna.

During the summer program, Dunnedin tested another 17 targets, three of which turned out to be kimberlite pipes. Diamond results from this drilling were not available at the time of this report.

"I look forward to the drill results and will continue assisting the Dunnedin team with the exploration and development of this project," said Fipke.

Dunnedin also has an option to acquire full ownership of Trapper, a large gold-copper property in the Atlin region of northwestern British Columbia.