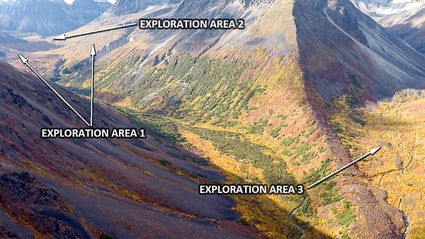 Using the drill data from previous exploration, Nova Minerals calculates that a 740-meter section of the larger Oxide prospect on its recently acquired Estelle property in Alaska provides an exploration target with between 1.1 million to 2.3 million ounces of gold.

With spending only about US$100 million on mineral exploration in Alaska in 2017, compared with expending some US$1.6 billion in Australia during the same period, Nova Minerals believes the Far North state is vastly underexplored, yet hosts some of the world's largest copper and gold deposits.

"Alaska has untapped riches and is open for many more major discoveries," Nova Mineral Director Louie Simens told Mining News. "For context of Alaska's potential, Australia's total gold resource is 450 million ounces as at December 2014, according to Geoscience Australia. The Pebble project alone is 105 million ounces. Just one deposit in Alaska is equivalent to approximately 23 percent of all of Australia's gold resources."

SE12-04, drilled to the southeast of the discovery hole in 2012, cut 41.5 meters averaging 1.1 g/t gold, indicating the drilling was vectoring toward higher gold grades as it approached a strong geophysical anomaly farther southeast.

Using the drill data from Millrock's work in the area, Nova calculates that a 740-meter section of the larger Oxide prospect provides an exploration target with between 1.1 million to 2.3 million oz of gold. This year's first pass reverse circulation drill program was designed to substantially expand this target and calculate an Australian Joint Ore Reserves Committee-compliant resource by the end of the year.

"With previous work on the Estelle project establishing great targets, Nova Minerals is fortunate to have a five-year head start on the project, and we believe the project shares many similarities both in size and scale to the Pebble and the Donlin Creek discoveries," said Nova Minerals CEO Avi Kimelman.

With more than 15 exploration targets across Estelle, Nova is already planning future drill programs, seeking a major discovery on its Alaska gold-copper property.

"Alaska is a fantastic opportunity for our company and believe we have positioned ourselves in the right place at the right time," Kimelman added.