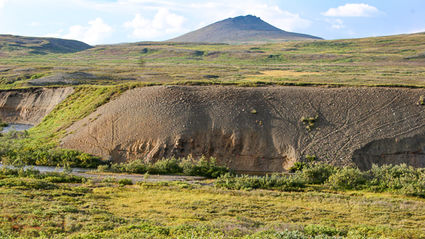 Rock Chip samples collected from this creek bank at the Luna prospect on Rivergold's Southwest Alaska project returned up to 37.6 grams per metric ton gold and 58 g/t silver.

When Riversgold Ltd. listed on the Australia Stock Exchange late in 2017, the Perth-based gold exploration and development company held the Southwest Alaska project among its assets, a property that is very familiar to Allan Kelly, director of the company.

"I have personally been involved with these projects since 1997, when I was part of the team that discovered outcropping high-grade gold mineralization at Quicksilver," he said.

Luna-Quicksilver is among three gold exploration properties – Kisa and Gemuk Mountain being the other two – that make up the Southwest Alaska project.

Together, these properties cover 27,122 acres of the Kuskokwim Mountains at the southwest end of the Tintina Gold Belt, a 125-by-750-mile (202 kilometers by 1,210 kilometers) gold-enriched province that arcs from northern British Columbia, through Southwest Alaska.

Over the two decades since, Kelly has been involved with exploration in southwest Alaska at Donlin Gold, which is situated about 95 miles to the northeast. That deposit has grown from a 2-million-ounce gold project into a developing mine with 39 million oz of gold in reserves. Kelly believes the Riversgold property hosts similar potential.

To refine targets for drilling, the junior began its 2018 exploration program with induced polarization (IP) geophysical and surface sampling surveys at the Luna, Luna East, Quicksilver and Kisa prospect areas of the Luna-Quicksilver property. This area runs along a splay fault off the Tintina Gold Belt-bounding the Denali-Farwell Fault.

Outcropping high-grade gold and polymetallic mineralization has been identified along this structure but had not been drilled until this year.

In a reconnaissance program carried out toward the end of the 2018 season, Riversgold drilled one hole in each the Luna, Luna East and Quicksilver targets.

The first hole of the program, LQDD001, tested Luna. Historical chip samples from an outcrop at Luna returned up to 64.7 g/t gold and 74 g/t silver. Testing below this outcrop, LQDD001 cut variably altered quartz feldspar porphyry, with disseminated pyrite, from surface to a depth of 107.9 meters.

The second hole tested Luna East, a prospect about 1,000 meters northeast of Luna. This hole, LQDD002, cut 0.8 meters of quartz-feldspar porphyries from a depth of 18.4 meters and 1.07 meters of abundant coarse-grained disseminated arsenopyrite and minor pyrrhotite and chalcopyrite at 43.89 meters.

The third hole was drilled at Quicksilver, a prospect about 3,000 meters northeast of Luna East. Rock chip samples from Quicksilver have returned up to 37.6 g/t gold and 58 g/t silver. Riversgold said LQDD003 encountered several arsenopyrite veins similar to the ones sampled on the surface.

Assay results were pending at the time of this report.