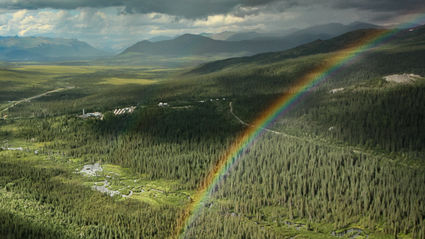 A rainbow touches down near the Bornite camp at the Upper Kobuk Mineral Projects, where South32 and Trilogy Metals are investing some US$16.7 million to advance Arctic and Bornite, the two most advanced mine projects at the western end of the proposed Ambler Mining District Industrial Access Road.

With US$17.5 million invested into the Upper Kobuk Mineral Projects (UKMP) in 2018, Trilogy Metals Inc. took major strides in achieving its goal of beginning to develop the vast mineral potential that the world-class Ambler Mining District in Northwest Alaska has to offer.

Trilogy's aspiration to develop mines at this metals-rich project got a financial boost early in 2017, when Australia-based South32 Ltd. entered into an option to acquire a 50 percent joint venture interest in UKMP for US$150 million. To keep this option open, South32 agreed to invest US$30 million on the project over three years, funds that have been spent on expanding Bornite.

South32 funded US$10 million for resource expansion drilling at Bornite in 2017, a program that clearly demonstrates the underground portion of Bornite covers at least a 1,500- by 2,500-meter area beyond the previously defined underground deposit. These holes, however, were too widely spaced to calculate a resource for the expansion area.

This year, South32 funded an addition US$10.8 million for just over 10,000 meters of drilling to infill and expand the currently defined open pit and underground resources at Bornite. This, along with the 8,437 meters drilled last year, will be used to calculate an updated resource for Bornite early in 2019.

In addition to high-grade copper, this resource will include a calculation of the cobalt also found in the huge deposit.

While South32 puts money in expanding Bornite, Trilogy is investing US$6.7 million into advancing a feasibility study for Arctic, a large and metals-rich volcanogenic massive sulfide deposit roughly 16 miles to the north.

At base case metals prices – US$3 per lb copper, US$1.10/lb zinc, US$1/lb lead, US$18 per oz silver and US$1,300/oz gold – the Arctic Mine outlined in the PFS is expected to pay back the initial capital expenditures during the second year of operation.

The pre-tax net present value (8 percent discount) of this operation, from the beginning of the three-year construction period, is calculated to be US$1.94 billion and the pre-tax rate of return is 38 percent.

Trilogy is also gathering extensive environmental data – hydrology, wetlands delineation, meteorological and archeology – in preparation of its plan to submit a mine permit application for Arctic in the first half of 2019.

Given that no federal lands are involved with the Arctic Mine project – UKMP is made up of private mineral patents and state mining claims held by Trilogy and private lands owned by NANA Regional Corporation Inc. – Trilogy estimates it will take two to three years to complete the permitting process for its first operation in the Ambler Mining District.

Ideally, the Ambler road and Arctic Mine would be completed at about the same time. To keep the road side of this development on schedule, AIDEA submitted applications in 2016 for rights-of-way, permits and related authorizations needed.

The proposed Ambler road received a vote of confidence from two of the largest stakeholders in northern Alaska – the Northwest Arctic and North Slope boroughs. In early July, these neighboring municipalities that together oversee an enormous mineral- and oil-rich area of Alaska signed a joint resolution in support of continued evaluation of the industrial access into the Northwest Arctic Borough.

During a joint assembly held in Barrow, the boroughs also voiced an interest in investing in the Ambler road project.

"(B)oth boroughs shall explore opportunities for co-investment and ownership," according to a resolution signed by mayors and assembly presidents of the northern boroughs.

The U.S. Bureau of Land Management is on pace to publish a draft Environmental Impact Statement for the Ambler Road by the end of March 2019. 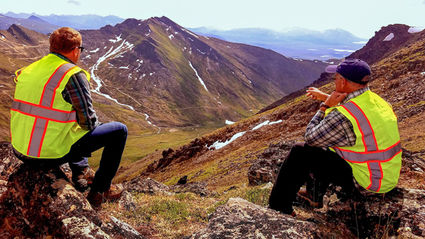 Sitting across the valley from the Arctic mine project, Trilogy Metals President and CEO Rick Van Nieuwenhuyse and Vice President of Projects Bob Jacko discuss future development ideas for the high-grade VMS deposit in Alaska.