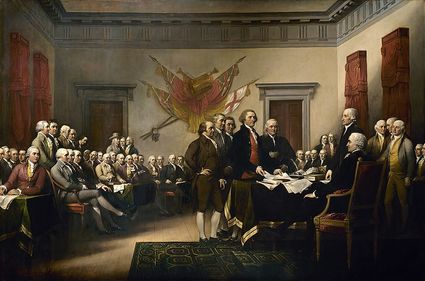 The change has historical explanations. (Give an historian enough time and he (or she) can explain anything.) For instance, the Founding Fathers were substantially influenced by the writing of John Locke, a 17th Century political philosopher from whom Thomas Jefferson copped the concept. Locke wrote of life liberty and property; Jefferson converted it to life liberty and the pursuit of happiness.

Contextually, the two phrases make distinct points, under the Declaration all men are entitled to pursue happiness; whereas under the Fifth Amendment, the government is not allowed to take your property without due process.

Due process is an historical concept stemming from the engrossment of the Magna Carta, essentially requiring the government to be fair. Fast forward seven hundred years and we find Americans are still bedeviled by concerns of fairness at the hands of the sovereign.

In the myopic world of land law as it affects Americans in general and Alaska Miners in particular, the doorway to due process is guarded by administrative judges who are purportedly vested with the discretion of deciding what is "fair." Within the Department of the Interior, these adjudicators are attached to the Office of Hearings and Appeals within the Office of the Secretary and are vested with the authority to hold hearings, consider evidence and make decisions concerning specific matters. Land decisions may generally be appealed to the Interior Board of Land Appeals (IBLA) which reviews the decision below and affirms, overrules or remands the matter to the administrative judge.

The system does not work perfectly, but under the Administrative Procedure Act, there is a remedy for disgruntled litigants. They may take their case to the federal district court and can show the judge that the IBLA's decision was arbitrary, capricious or not supported by law. The jurisdiction of the federal courts is well circumscribed, however, and somehow often falls short of the underlying fairness standard.

In June, the Supreme Court of the United States (SCOTUS) compounded the problems of the IBLA by the decision in Lucia v. SEC, 585 U.S. ___ (2018). In Lucia, a determination was made by a Securities and Exchange Commission (SEC) administrative judge against an individual charged with violating certain securities laws. Like the Department of the Interior and virtually every other government agency, the SEC has administrative judges to resolve challenges and impose sanctions. In Lucia, however, the authority of the administrative judge was challenged because he was not appointed by the Commission, as is required by the Constitution, but by the Commission's staff. SCOTUS reversed the decision and remanded it to be reheard by a properly appointed judge.

Interior's administrative judges were likewise vulnerable. Accordingly, after Lucia the IBLA simply stopped deciding the cases before it and, according to one report, for about ten weeks only one decision was issued. There are over 300 cases pending resolution, and until last week, there apparently were no judges authorized to decide them.

On Oct. 24, Secretary Zinke officially appointed "as his own," as the Constitution requires, 19 men and women to the position of Administrative Law Judge, Administrative Judge, or Indian Probate Judge in the Office of Hearings and Appeals.

While it is a given that all decisions by all judges will always be "fair," with no authorized judges on the bench, justice is denied.

In the squabble over the appointment of "inferior officers" of the United States, the Lucia case – decided by a six-vote majority – appears to leave unresolved the issue of whether the "appointments" clause of the Constitution may, or may not, be satisfied by the appointment of judges who can be fired. SCOTUS explicitly left that question for another day.