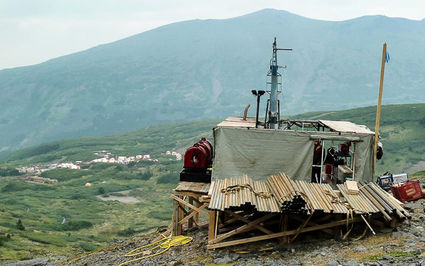 Long sections of high-grade gold and silver at the Saddle South discovery on GT Gold Corp.'s Tatogga property at the northern tip of British Columbia's Golden Triangle catapulted this newly formed exploration company into the spotlight in 2017.

This award recognized Saddle South as one of the few genuinely new precious metals discoveries to emerge in recent years. Finding such a high-grade and potentially large gold deposit less than 10 kilometers (six miles) from Highway 37 highlights the minerals exploration potential of northern British Columbia, as well as neighboring Alaska and the Canadian territories.

"The Saddle discovery is a very exciting and prospective gold property situated within the expansive Tatogga property located in the Golden Triangle in Northern B.C.," said GT Gold President and CEO Steve Burleton.

Saddle South, however, may not be the largest or most important deposit that the 442-square-kilometer (171 square miles) Tatogga property has to offer.

Saddle North, a parallel trend revealed by geophysics completed last year, may host a porphyry deposit that served as the "engine" of the entire Saddle mineralizing system.

The 16,000-meter discovery drill program carried out at Tatogga in 2017 primarily focused on the Saddle South discovery.

This drilling traced the high-grade gold-silver mineralization over a 500- by 150-meter area and to a depth of about 500 meters.

At the end of the 2017 season, this discovery remained open in several directions, particularly to the east and to depth, expansion targets the company is testing this year.

Early results from the 2018 program have expanded Saddle South both along strike and to depth.

Testing the depth of the deposit, TTD069 cut high-grade mineralization 650 meters below surface in what appears to be a new sub-parallel mineralized trend roughly 175 meters south and east of the main area of 2017 Saddle South drilling.

"We are very pleased with the early success of the drill program at Saddle South this season. All holes have hit mineralization as we step out to the east and west, and our deep drilling encountered high grades and strong widths along a new and well-mineralized trend not far south and east of the area drilled in 2017," said Burleton.

Saddle North, a copper-gold-silver porphyry system intersected with drilling completed just before winter weather forced the end of the 2017 season, is a target GT Gold is excited to further explore this year.

"As per plan, we are now also underway with follow-up drilling to last year's intriguing results at Saddle North, where our first two reconnaissance holes showed significant potential for a sizable copper-gold-silver porphyry system, perhaps like that of the Red Chris mine, which is only 20 kilometers (12.5 miles) southeast of Saddle," said Burleton.

An induced polarization ground geophysical survey completed this year has confirmed that the nearer-surface geophysical signatures outlined in a shallow survey completed in 2017 extend to depths of at least 500 meters and are continuous along trend. An initial 3,000- to 5,000-meter drill program slated for Saddle North will test several targets at the porphyry discovery, including deepening TTD062.

"We look forward to further demonstrating the true potential of the Saddle discovery area – both North and South," Burleton added.

In addition to drilling, GT Gold crews are investigating Quash-Pass, a prospect area about seven kilometers (4.3 miles) southwest of the Saddle targets.

Overall, the company has outlined a 6,000-meter-long trend of elevated gold and silver, along with Saddle South pathfinder elements such as zinc, copper, and bismuth in soils at Quash-Pass. Along with these geochemical characteristics, this prospect area has geological and geophysical similarities to Saddle South.

Saddle South, Saddle North and Quash-Pass provide GT Gold with its own golden triangle of targets on the Tatogga property.

Fortifying its camp to hold up to winter conditions, GT Gold plans to continue exploring this trio of targets until mid-November. 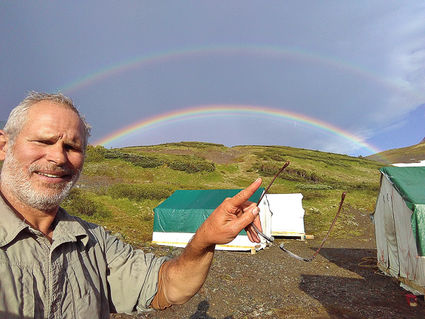 Editor's Note: An update including results from drilling at Saddle North can be found in Drills show Saddle North porphyry upside published in the Oct. 12 edition of North of 60 Mining News.