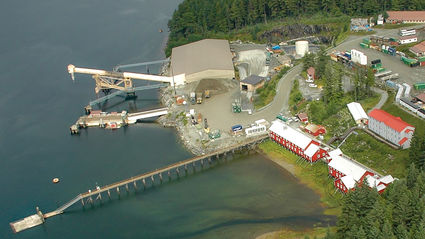 Greens Creek is one of two large mines located in Southeast Alaska, the traditional home of Sealaska shareholders.

Seeking economic and cultural prosperity for its more than 22,000 Tlingit, Haida and Tsimshian shareholders while also looking to provide even greater benefits for future generations, Sealaska takes a balanced approach to developing the resources growing above and stored beneath its lands in Southeast Alaska.

This does not mean the Southeast Alaska Native Claims Settlement Act (ANCSA) corporation shuns mining or other resource development in its region, a nearly 600-mile stretch of coastal Alaska rich in timber and minerals. Its economy, after all, has been rooted in forestry for the past 47 years.

"Natural resources will always be a core of what we do, being the largest private landowner is Southeast Alaska," Sealaska President and CEO Anthony Mallott told a crowd gathered for a March 7 breakfast hosted by the Alaska Resource Development Council.

What it does mean is that Sealaska believes "strong stewardship allows for current economic benefit, while maintaining opportunities for future generations."

Sealaska's land management strategy is guided by the traditional values of Southeast Alaska First People. Applying these values that have been developed over more than 10,000 years to a corporate setting is something the Southeast Alaska corporation spent nearly a decade working on.

Haa Aaní, which means our land, is one such Southeast Alaska value that speaks directly to Sealaska's land management strategy.

"Land itself is not a value, it is how we fit into the environment, how we work within the environment that is the value," Mallott explained during his March 7 presentation.

As such, Haa Aaní is the foundation for the collective identity and culture of Sealaska and its tenets include:

• Utilizing the land while protecting it for future generations;

• having a sustainable relationship with Sealaska lands; and

Haa Shuká, which means our past, present and future, is another value that influences how Sealaska utilizes it lands.

• Honor the sanctity of ancestral cultural and sacred sites and heritage;

• provide social and financial benefits for current and future generations; and

"Take the strengths of the past, use them for current benefits, but make sure you are passing on as much strength and value to future generations," Mallott summarized Haa Shuká.

Haa Latseen, which means our strength and leadership, focuses on the collective strength of Sealaska and its shareholders.

The values of Haa Latseen include:

• education and training; and

"We really focused on the underlying themes of strength – it is training; it is continual improvement; it is a mindset that utilize your strengths in the best manner possible towards the best of the company," the Sealaska CEO explained.

Wooch.Yax, which means balance, reciprocity and respect, guides Sealaska's partnerships with other organizations and how it works with its shareholders.

One of the main values under Wooch.Yax is Wooch.éen, which translates to people, tribes and organizations working together.

"That is one of the biggest cultural changes that we took on at Sealaska, just listening," Mallott said.

And Sealaska management listening to current shareholders through dialogue; ancestors through the values passed down; and future shareholders though sustainable prosperity guides the ANCSA corporation's balanced approach to land management.

Making the most of the land

While Sealaska is the largest private landholder in Southeast Alaska, its holdings are relatively small due to the Tongass Forest that covers much of their region and are under federal control, either as a national forest or national parks.

Sealaska, on the other hand, only has title to 3 percent of the land within its shareholders' traditional territory, or about 630,000 acres. This means that the corporation has the smallest property base of any of the 12 land-holding ANCSA corporations.

"Land ownership in Southeast is tough," the Sealaska CEO added.

Guided by Tlingit, Haida and Tsimshian values, the Southeast Alaska ANCSA corporation is making the most of the lands it owns.

For most of Sealaska's 47 years, this has been focused on harvesting the rich timber resource growing from the 360,000 acres of surface and subsurface lands owned by the regional corporation, the balance of ANCSA lands in Southeast Alaska are surface rights owned by the village corporations.

Mallott said the math of these claims does not add up, considering Sealaska only owns about 3 percent of the land in Southeast Alaska and only logged about a third of the forested lands it owns.

Sealaska has found an innovative and sustainable way to turn a profit from the old growth on the remaining 65 percent of its forest lands – selling carbon credits.

Known as the carbon-offset project, this involves selling credits, in the form of carbon stored in Sealaksa's old growth forests, to offset carbon released in California under that state's cap-and-trade program.

For Sealaska, this means that roughly 165,000 acres of forest will not be commercially harvested for a century but can be used for other purposes.

Sealaska received a one-time payment for the carbon credits and is eligible for further payments if forest management results in a net gain of carbon stored there.

While the exact dollar figure has not been released, indications are the 9.3 million credits sold fetched a healthy sum.

"The proceeds from selling these credits in 2018 will contribute significantly to one of our strongest net income years to date," Mallott informed Sealaska shareholders earlier this year.

He said the carbon credit proceeds will be invested back into Sealaska shareholders, businesses and communities for generations to come.

The Sealaska region, which stretches from the heavy mineral sands near Yakutat on the north end to the rare earth elements-rich Prince of Wales Island to the south hosts a large number of base, industrial and precious metals deposits.

In fact, two of Alaska's six large-scale mines – Hecla Mining Company's Greens Creek and Coeur Mining Inc.'s Kensington – are located in this region, though not on Sealaska-owned lands.

In addition to these underground silver and gold mines, exploration companies are actively investigating the region for a wide variety of minerals and metals.

Constantine Metal Resources Ltd.'s Palmer copper-zinc-silver-gold-barite project near Haines is among the most advanced of these projects.

Constantine, working with its partner Dowa Metals & Mining Co., has advanced Palmer to the point to begin investigating the potential of developing an underground mine there.

Toward the southern end of the Southeast Alaska Panhandle, Ucore Rare Metal Inc. has outlined a deposit of the highly prized rare earth elements at its Bokan Mountain project on Prince of Wales Island.

While preliminary economic and engineering studies for developing a mine at Bokan have been completed, Ucore is currently focused on establishing a rare earth processing facility at Ketchikan, a port town about 30 miles northeast of Bokan Mountain.

While this facility, known as the Strategic Metals Complex, may eventually process rare earths mined from Bokan Mountain, it is being built to initially separate REEs from feedstock sourced from outside of Alaska.

Other current mineral exploration projects along the panhandle include:

• Frenchie, a large gold- and silver-rich VMS prospect near Wrangell being explored by Zarembo Minerals Company;

• Icy Cape, a heavy minerals sands project on Alaska Mental Health Trust lands near Yakutat that is being explored for a number of minerals and metals, including titanium, zirconium, gold and garnets.

With Sealaska selecting its relatively small parcel of Southeast Alaska based largely on timber potential and traditional uses, none of the current mines or advanced mineral exploration project are on its lands.

Some of the acreage held by the ANCSA corporation, however, does "have the potential to support small-scale mines."

Given the jobs and income potential from mining, Sealaska has recently taken a closer look at the mineral resources on its lands and how a minerals program would best benefit shareholders and the region.

"Previous minerals mapping on Sealaska lands has indicated the potential for several types of mineral deposits including gold, silver, zinc, copper, iron and rare earth elements," Sealaska penned on the minerals page of its website.

Mallott said Sealaska is looking at market opportunities for the mineral potential on Sealaska lands.

"We talked with Constantine most closely," the Sealaska CEO said. "They have offered to look at some of our lands."

Constantine, who has been exploring a copper-zinc-gold-silver-barite project near Haines, is familiar with both the people and geology of Southeast Alaska.

Whatever future mining is carried out on Sealaska lands would need to fit within the traditional values that guide the Southeast Alaska corporation.

"As a Native enterprise with deep roots to Haa Aaní, our land, this obligation to proceed responsibly will be at the heart of Sealaska's minerals program," the company said.

Wooch.éen, or working with its shareholders, is another value that must be honored to explore and mine on Sealaska lands.

The Southeast Alaska corporation said it "can only move its minerals program forward alongside community voices and input. This collaboration can have a positive economic impact for the region."

This is common theme for working on ANCSA lands across Alaska and Mallott said Sealaska shareholders generally support resource development if it is done right.

"Our communities support responsible resource activity and we work with them very closely to maintain that support," the Sealaska CEO told the resource crowd gathered to hear his breakfast presentation.

EDITOR'S NOTE: Sealaska – balanced resource development is the third article in a 13-part series that investigates what the Alaska Native Claims Settlement Act means for Alaska's mining sector and its future. The remaining 10 articles will dig deeper into each of the land-holding Regional corporations; the mining lands that they own; and the services they offer to the mining sector. As a life-long Alaskan that has written about mining here for more than a decade, it is my hope that this series will provide a better understanding of ANCSA and serve as a guide to mining companies seeking to do business in The Last Frontier. For further information on ANCSA see An Alaska Native claims primer for miners published in the February edition of North of 60 Mining News.