Calm before the 2019 exploration storm

While April mining activity in Alaska was slow, at least $130M in exploration adds up to a busy summer across the 49th State North of 60 Mining News – May 1, 2019 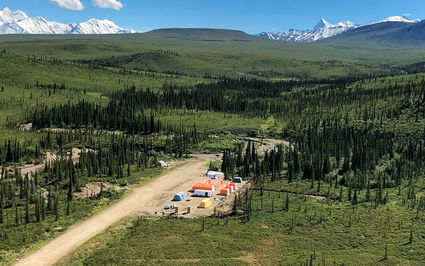 First off, some internally generated data.

Current public and private budget announcements suggest Alaska's exploration expenditures for 2019 will be at least $130 million and likely more. Current data also suggests about 50 percent of those funds will be coming from Australian companies, the largest percentage contribution by Australian companies since tracking this sort of thing began in the early 1980s. Canadian contributions will be about 35 to 40 percent of the total, leaving U.S., Japanese and other countries to fill in the remaining 10 to 15 percent.

For those looking to acquire new projects as well as those looking to sell existing ones, RBC Capital Markets released some startling stats on the sales prices for gold and copper deposits since early 2010.

At the same time, National Bank Financial Markets and S&P Global reported discovery rates for new gold deposits continue their 25-year slide from a peak in 1995, when over 150 gold deposits were discovered, to the last five years when discovery rates have plummeted to 10 or less per year.

While these low unit-value sales prices and decreasing discovery rates have dominated the last decade, S&P Global reported that world gold production levels increased to a record 107.6 million ounces in 2018. However, the rate of growth of gold production has slowed over the last decade to its current level of less than 1 percent per year.

For 2019, Statisa projected worldwide gold production slightly above 2018 levels. This trend is not expected to continue, as it is taking longer and longer to get fewer and fewer lower-grade, lower-quality gold deposits into production.

The copper sector is also facing some serious production headwinds, as indicated by recent data released by Engineering and Mining Journal.

During the 20-year period ending in 2001, copper exploration efforts worldwide discovered 20 major new copper deposits. At $950 million, this comes to less than $50 million per discovery.

During the period 2001 to 2017 the industry has discovered only three significant new copper deposits, spending an astonishing $6.5 billion, equivalent to more than $2.2 billion per discovery.

With supply deficits widely forecast for the near term, the demand for new copper resources is expected to remain strong.

Seems pretty obvious that the exploration sector is going to have to get remarkably better at finding new deposits, and do it tout suite.

If we want to increase our chances of success, we are going to have to go look for large, high-quality deposits in places that are relatively under-explored, where the chances of finding such deposits are significantly better. I can think of at least one such place that fits this description, how about you?

Graphite One Inc. announced completion of the first tranche of a non-brokered private placement offering, raising gross proceeds of C$1,869,560 for general corporate purposes and advancement of its Graphite Creek deposit. Well-known Alaskan mining concern Taiga Mining Company Inc. was the sole participant in the first tranche of this offering, bringing their holdings to 34.4 percent of the Graphite One's issued and outstanding common shares.

Nova Minerals Ltd. provided an update on 2019 exploration plans for their Estelle gold project. Initial efforts will focus on a spectral induced polarization-resistivity geophysical survey over selected areas of the Oxide North and Oxide South prospects. A pole-dipole array will be employed using six dipoles and a 50-meter dipole spacing. These parameters will allow for a penetration depth of about 150 meters. Following completion of the survey and on-site interpretation of the results, the company plans to complete 2,500 meters of core drilling in this zone with hole depths reaching up to 600 meters. Follow-up drilling of an additional 2,500 meters will be initiated if initial drilling results are encouraging. Subject to phase two drilling, reverse circulation drilling will be used to infill shallow in-pit mineralization for early pit optimization models. Once both phases of core drilling are completed an analysis will be undertaken to determine if there is adequate data to support an initial mineral resource estimate. Additional field mapping and prospecting also will be conducted on the RPM and Shoeshine occurrences where historic drilling intercepted 102.11 meters grading 1.04 grams of gold per metric ton, including 2.07 g/t gold over 21.94 meters.

Hecla Mining announced preliminary first quarter 2019 production results for its Greens Creek mine on Admiralty Island. The mine produced 2,232,747 ounces of silver and 14,328 oz of gold, increases of 17 percent and 9 percent, respectively, compared to 1,913,232 oz of silver and 13,118 oz of gold produced in the year previous period. Higher gold and silver production was due to higher ore grades as well as increased recoveries, partially offset by lower mill throughput. The mill operated at an average of 2,298 tons per day compared to 2,349 tons per day in the first quarter of 2018. The company also released a Canadian National Instrument 43-101 report on the Greens Creek mine, which indicated proven and probable reserves of 107.1 million oz of silver based on a price of $14.50 per ounce silver. Measured and indicated resources are 97.4 million oz of silver, while inferred resources stand at 35.9 million ounces of silver. This reserve is the highest since the company acquired 100 percent interest in the mine in 2008. The life-of-mine plan extends to 2030 without adding any new reserves. With excellent exploration upside in the immediate mine area, this mine life is likely to extend beyond 2030. At approximately current prices and based only on the 107.4-million-oz reserve base, the mine is expected to generate $802 million of free cash flow over the life-of-mine with an after-tax net present value of $638 million at a 5 percent discount rate. The company indicates it expects about 20 percent more cash-flow in the next five years than the $72 million per year averaged in the past five years.

Coeur Mining Inc. reported first quarter 2019 production results from its Kensington Mine. The mill processed 164,332 tons of ore, a slight increase over the 158,706 tons of ore produced in the year previous period. The mine produced 29,973 ounces of gold grading 0.20 ounces of gold per ton with an average recovery of 90.2 percent. The high-grade Jualin deposit reached commercial production during the quarter, shifting underground efforts from resource development to full production, allowing for longhole stope production at Jualin in future quarters. The Jualin deposit contributed about 10 percent of the gold during the quarter, a level expected to increase during the remaining quarters of 2019. The company indicated that it expects full-year 2019 production from the mine at 117,000 to 130,000 oz of gold.

Coeur Mining's Kensington operation in Southeast Alaska produced 29,973 ounces of gold during the first three months of this year.