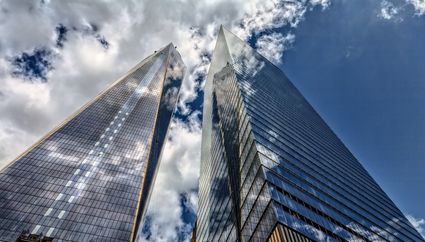 With a natural ability to adhere to glass and silvery appearance, indium is used in energy saving coatings on architectural glass commonly seen on high-rise buildings.

If you are reading this article on your computer, tablet or phone, you are almost certainly looking through indium as we speak; and, if that devise happens to be a touchscreen you have the unique properties of this critical mineral to thank as you scroll down to read more about indium and where it can be found in Alaska.

This is because indium-tin oxide is used as a transparent conducting film applied to virtually every flat-panel display and touchscreen on the market. This thin coating transforms incoming electrical data into an optical form.

When it comes to the combination of characteristics required for this widely used application – transparency; electrical conductivity; strong adherence to glass; corrosion resistance; and chemical and mechanical stability – indium-tin oxide has no equal.

This irreplaceability to devices used by virtually all Americans and every major sector of the economy is why indium is on the U.S. Geological Survey's list of 35 critical minerals.

"Indium can be considered a critical material for display technology because there are few substitutes," the USGS penned in a 2017 report on critical minerals.

This criticality is compounded by the fact that the U.S imports all of its indium from other countries. There are, however, a few places in Alaska that could provide a domestic source of this touchscreen metal.

More than a glassy metal

Flat-panel displays and touchscreens account for roughly 65 percent of indium consumed globally. While each of these devises only need a small amount of indium-tin oxide, the massive quantity of televisions, computer screens, tablets, smartphones and numerous other devises with liquid crystal displays adds up to a lot of this metal.

In addition to the strong adherence to glass that contributes to indium's use on electronic displays, this silvery metal is highly reflective, making it an ideal ingredient for an energy saving coating on architectural glass most commonly seen on high-rise buildings.

Another attribute that makes indium useful is the metal's low melting point, which makes it a good candidate for several other alloying applications.

"Alloys and solders are the second-ranked end use of indium globally (9 percent). Indium-containing solders have lower crack propagation and improved resistance to thermal fatigue compared with tin-lead solders," according to the USGS.

Interestingly, indium solders can be used to bond certain non-metallic materials such as glass glazed ceramics, and quartz.

A gallium-indium-tin alloy called galinstan is a liquid at room temperature, which can be substituted for mercury in certain applications. Other indium alloys with slightly higher melting temperatures are used to turn on fire sprinkler systems when heated by the blaze.

Semiconductors make up roughly another 9 percent of indium's global use, primarily in laser and light-emitting diodes (LEDs).

The United States consumed roughly 170 metric tons (170,000 kilograms) of indium in 2018. All of this metal is supplied from other countries. China (27 percent); Canada (22 percent); Republic of Korea (11 percent) and Taiwan (10 percent) were the major sources for these indium imports.

Indium averaged US$310 per kilogram during 2018 and was selling for around US$385/kg in March.

Like its sister metal germanium, indium is primarily produced as a byproduct from zinc mining. As a result, indium production is often credited to the refinery that extracts the metal from concentrates, which makes the mine source sometimes difficult to track down.

There are good indicators, however, that Teck Resources Ltd.'s Red Dog Mine in Northwest Alaska is the source of at least some of the indium the U.S. imports from Canada.

While most zinc smelters are not equipped to recover indium, Teck's Trail Operations in southern British Columbia is.

Much of the refinery's zinc concentrates come from Red Dog, though it is unclear if this contributes to Trail indium output.

In addition to the zinc-rich sedimentary exhalative deposits (SEDEX) deposits in the Red Dog region, a number of places around Alaska that could provide future supplies of indium.

One place critical mineral explorers should look for indium is in tin-bearing "specialized granites" and these rocks are found all across Alaska.

The Lost River and Kougarok tin regions on the Seward Peninsula in far western Alaska is an area particularly rich in these granites. 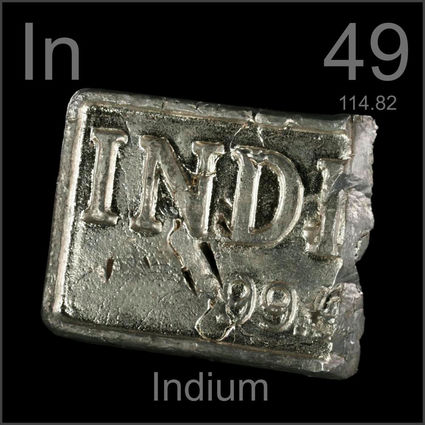 Using a geospatial tool developed in cooperation with Alaska Division of Geological & Geophysical Surveys, USGS identified at least nine other areas to search for tin deposits that may have indium associated with them.

"In addition to the known tin province in the Lost River–Kougarok belt of intrusive rocks on the Seward Peninsula, areas that have high potential for tin-tungsten-molybdenum-tantalum-indium-fluorspar deposits associated with 'specialized' granites also are widely scattered across Alaska," USGS and DGGS penned in a 2016 Alaska critical minerals report.

For more information on these deposits, see Tin – Alaskas gateway critical mineral in this magazine.