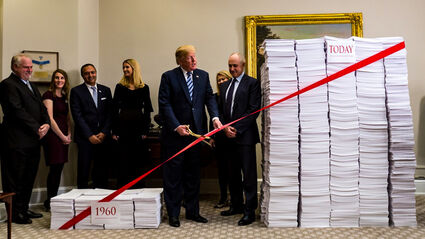 A priority of the Trump administration in 2016 was the reduction of the regulatory burden on America's businesses. Three years ago, the President signed Executive Order 13771, "Reducing Regulation and Controlling Regulatory Costs." The regulatory reform efforts of the federal government have continued into fiscal year 2019. This past year various federal agencies have taken 150 deregulatory actions, including 18 deregulatory actions each by the Department of the Interior and the Environmental Protection Agency. In fiscal year 2020, agencies anticipate saving a total of $51.6 billion in regulatory costs from final rulemakings, including over $2 billion from Interior and EPA alone.

As deregulation gains traction, its effects on the resource development industries in Alaska are likely to become increasingly more visible. At the moment, just looking at the issues that cross my desk, there is no shortage of specific complaints.

Miners complain about the length of time it takes to get an exploration permit. Prospectors have thrown up their hands when it comes to locating new mining claims on federal land. The Alaska Miners Association has complained about the procedures employed in the development of resource management plans. Frustrations are common with the Interior Board of Land Appeals. The processing of probate claims through the Interior Board of Indian Appeals that would allow Alaska Natives who inherit allotments to manage their own land proceed at a snail's pace. Permitting delays associated with Clean Water Act requirements seem endless.

Although it is always dangerous to extrapolate from the specific to the general, it appears that there are innumerable issues with federal regulatory agencies operating in Alaska and, based on my conversations with Lower 48 mining interests, in other states as well. Alaska, unfortunately, is not unique in this regard.

The last time I looked, the various statutes that federal regulatory agencies rely on for their authority to "review" permit applications to do something, contain no language that justifies preventing a project from going forward.

The clear purpose of the various laws, whether you are speaking of the National Environmental Policy Act, the Clean Water Act or the Clean Air act, is to make projects better, not to make applicants go away. By any measure, reasonable stipulations on exploration and mining are appropriate. On the other hand, there are virtually no circumstances why the application for a permit for most resource development activities ought to give rise to endless public comment periods and objections by the pound from LOLITaS (Little Old Ladies in Tennis Shoes) who have learned everything they know about Alaska from page-worn issues of National Geographic magazine.

Likewise, although the Alaska Native Claims Settlement Act was understood to put an end to all Native land claims in Alaska, the subsequent recognition of tribal entities in Alaska has resulted in an obligation for some agencies to consult with tribal entities on a government-to-government basis, over and beyond the public comment process. While there is nothing wrong with the recognition of tribal entities, there is no justification for such entities to be able to back-door regulatory agencies with regard to land management decisions in Alaska in this manner.

Alaska is a resource state. Alaska's prosperity and future depends on its ability to develop those resources. If it appears that the federal agencies cannot find the way to facilitate the development of natural resources, quickly, cheaply and in consonance with the full panoply of health, safety, environmental, natural resource and social standards, then the responsibility for regulating such development activities ought to be delegated to the State.

Although several other states have succeeded in obtaining Section 404 primacy, at the moment it appears that the cost of management of Alaska's vast wetlands (including permafrost, apparently) would exceed the fiscal resources that the State is able to bring to bear on this problem. Section 404 primacy is an idea whose time has come. Perhaps as commodity prices continue to rise, the revenue to the State from resource development will justify the State taking at least this one small step forward.

Indisputably, while the noise from Washington about who did what to whom and when is a major distraction, not unlike the random pounding of an empty trash can in the middle of the night, sooner or later it will pass. In the meantime, to the extent that Alaska has a window of opportunity to assume the responsibility for managing its own resources, doing so should be a priority.

Beware the lure of state primacy of federal programs. It costs the state way too much money and the experience with DEC primacy over discharge permits has been a very unhappy one. I was opposed to it when it was being discussed and I feel vindicated that I was right. It was a mistake.