Although watching legislation become law is like watching sausages being made, sometimes the end product does taste pretty good 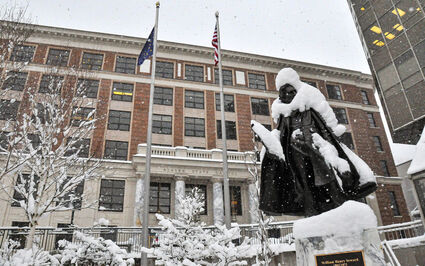 A storm blankets Alaska's Capitol with snow before the start of the 31st legislative session.

It is the very nature of the legislative process for the participants to endure conflict and controversy. Generally, the confrontations endemic to law-making begin when a citizen files for public office and starts a campaign. Unless unopposed, this brave soul must raise funds and interface with voters incessantly until election day. The candidateâ€™s calendar is full, from registration on, and then only one of the contenders for a given seat prevails. For all of the unsuccessful candidates, the ensuing option is to try again next time or walk away. â€śAlso Ransâ€ť rarely get more than a footnote in the annals.

The job of running for a competitive seat is hard. It takes time away from remunerative vocations and is frequently characterized by harangues from would-be constituents who entertain opposing points of view. Candidates must be conversant with the broad spectrum of contemporary issues and form positions on issues with which they are broadly unfamiliar.

Candidates may expect to be investigated and vetted by every critic with a keyboard, in the popular press, on the airwaves and in the social media. Distortions are rampant. Perceived weaknesses are exploited. Candidates are forced to develop calluses where there used to be scars.

Election victory only marks the beginning of the job. The legislative body must organize itself before turning to the work at hand. Majorities must be formed, leadership positions must be established, committees must be staffed. The candidate who was forced to promise the moon to the constituency often finds him or herself at the mercy of an organization that lacks respect for the need to fulfill arbitrary commitments.

Once the compromises are agreed to and the job of legislating is in focus, the painstaking task of putting pen to paper begins. The legislative measure must be drafted. There are inviolable rules that must be followed. Proper phraseology is critical. Co-sponsorships must be solicited, drafts must be circulated. Every jot and tittle must be blessed by a cascade of interested parties.

Lobbyists are on hand to offer guidance on technical considerations. Constituents are at the door to ensure that their specific issues are addressed. Hearings must be held. Amendments must be considered. Accommodations must be made. Often a bill will be referred to a second substantive committee which will also have its say. Then the bill must await clearance from the Finance or Judiciary Committee before it can get a â€śruleâ€ť that takes it to the floor of the body for a vote.

Once passed, the process is repeated in the other body. If there are conflicts, the difference will be ironed out in a conference between the bodies before the proposed legislation is blessed by the legislature and forwarded for the Governorâ€™s signature or veto.

The candidate who survives the election and the trauma of advancing legislation through each convoluted step of legislative drafting and ultimate adoption stands to see it all go for naught with a swipe of the veto pen.

Every legislative proposal goes through each of the foregoing steps every time. Few bills are ever enacted into law because of the process, yet hundreds of proposals are dropped into the hopper each session for consideration. Given the difficulty of the process, the legislative candidate who can crow about having succeeded in getting anything passed that resembles in any way what a constituent wanted or needed, has a long leg up on re-election, if their ulcers donâ€™t first do them in.

Our legislators and the candidates who unsuccessfully run are all due our thanks and support.

Each year organizations such as the Alaska Miners Association (AMA) intensively review all relevant legislation to evaluate the impact on its constituency. They propose modifications, lobby key legislators and, quite significantly, back up their positions with financial contributions through affiliated political action committees.

Individual citizens, acting alone or collectively, have the right, if not the duty to support their legislators and legislative candidates as well as the legislative proposals that affect their interests with ideas and with dollars. While not everyone has the temerity to serve, those who do are entitled to be commended.

Currently, there is pending before the State Senate legislation to amend the Alaska Land Act. SB 155 has passed out of the Natural Resources Committee and has been referred to the Senate Finance Committee for review. Miners and those who are interested in the development of mineral resources on State land should be aware of and watch this bill as it proceeds out of the Senate and to the floor of the House.

The AMA has put an enormous amount of work into this measure, spanning half of the last decade to get it into its current state. There remains much work to be done, but the incomparable efforts of AMAâ€™s Executive Director, committee members and individual members of the Association are truly worthy of acclaim. The partnership of the AMA and supportive legislators in developing this legislation favorably illustrates how the difficult legislative process can and does work.