The times keep getting more interesting

The tricky part of juggling disasters is to take care not to allow your attention to linger on any one, but to attend to them all North of 60 Mining News – June 26, 2020 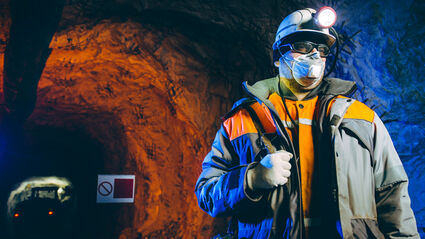 An underground miner wears a facemask to prevent the spread of COVID-19, a pandemic that is one of several events that qualify 2020 as interesting times.

Political differences, public demonstrations, a mortal pandemic, climate evolution, economic rebalancing plus a flood of other disasters have welled up over the past score of years to make our times "interesting." In a speech in Cape Town, South Africa, in June 1966, Robert Kennedy said: "There is a Chinese curse which says, 'May we live in interesting times.'" Of course, he was wrong. There is no such Chinese curse; however, the point was clear then as it is now.

So far in this Century alone, we have had the opportunity to enjoy watching a dynamic history unfold that, for some, may seem like no other; and for the rest of us it is the "same song, different verse".

In the wonderful world of resource development, many of us are on the edge of our chairs wondering how the new world will emerge. Will the novel coronavirus kill hundreds of millions of people world-wide? Will the ensuing collapse of dozens of economies portend even more deaths than the disease? Will anarchy beget chaos in remote corners of the globe? Are we trapped in a virtual science fiction horror movie that is looping in replay?

To be sure, these times qualify as interesting.

Having said that, there is little doubt the vast bulk of us will survive and emerge into a new and different world. A world in which government also serves the governed and not just the governors. A world where compassion and justice, at least occasionally, trump tribalism and anti-assimilation. A world in which a new economy rejects the failures that positioned mankind for the disasters that heretofore have been stuffed in our faces at every turn.

What can be said about the future is that the survivors will need to build a new city on the hill on the foundations of decades past. And we know that the building blocks for that new city, as has always been the case, will come out of the ground. While arguably any emerging entity will demand unlimited quantities of cheap or even free energy, perhaps the source of that energy will no longer be carbon-based. While we have not quite passed over that hurdle, we are drifting slowly in that direction. The demise of hydrocarbons, however, will not ameliorate the demand for platinum or zinc or copper, and certainly not silver and gold. Virtual currencies to the contrary, the cross of gold will forever be the cornerstone of any foreseeable financial system. And Alaska still has lots of gold to mine.

One of the indisputable maladies that has weakened the underpinnings of America's domestic economy is the impenetrable bulwark of government which has interposed bureaucracy athwart productivity, with highly-motivated planners who demand that every step forward be subject to multifaceted scrutiny. Had we only known at the time that nano-plastic particles are susceptible of ingestion by organisms that are at the base of the food chain, The Graduate would have been banned from movie theaters.

As with all things, the Middle Way is truly the best path forward. To that end, it is worth noting that a recent Executive Order has been promulgated recognizing that "antiquated regulations and bureaucratic practices have hindered American infrastructure investments, kept America's building trades workers from working, and prevented our citizens from developing and enjoying the benefits of world-class infrastructure." E.O. 13,927 requires government agencies "take all appropriate steps to use their lawful emergency authorities and other authorities to respond to the national emergency and to facilitate the Nation's economic recovery."

It will be useful to see whether this initiative gains any traction in Alaska where needed resources are still generally stored in the ground. As this column has often noted, the opposition to the development of Alaska's resources commonly stems from the subjective antipathy of a small number of people, often funded by miscreants of the Environmental-Industrial complex. They prevail on the bureaucracy to blindly assert the full scope of its legal mandates to the detriment of their opponents. The fault is not with the minions of government, although some may gladly follow the cause, nor is the fault with the statutes and regulations per se. Instead, the fault is with the structure of a government that gravitates toward centralization of authority and uniformity of interpretation at the expense of conceptual federalism.

If there is a takeaway from the political maelstrom of the past four years it has got to be that in 2016, roughly 40% of the voting electorate did not agree with the strangulating burden our federal government had become.

It remains to be seen how the current cascade of crises will be resolved and what lessons we may learn from the dethroning of the effete powerbrokers who got us there.