The US Supreme Court vacancy left by the death of Justice Ginsburg renews hope for resource development in Alaska North of 60 Mining News – September 25, 2020 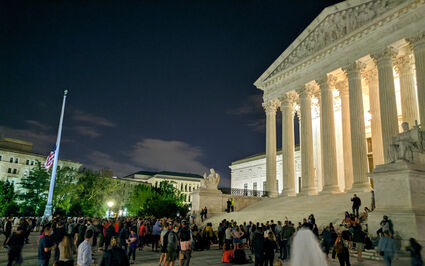 Mourners gather at the Supreme Court after the announcement of Justice Ruth Bader Ginsburg's death.

We all join in mourning the passing of one of the truly great Justices of the United States Supreme Court (SCOTUS). Not because of her bent, but because she personified the finest qualities of a loyal opponent. Her opinions and, more often, her dissenting opinions rationally articulated the argument for the liberal view, persuasively advancing the progressive cause in the face of tradition, policy and tribal instinct. Her absence from the bench denotes the end of a monumental legal era.

The current indication is that a successor will be nominated quickly and, although it is a Presidential election year, there is ample time for the Senate to confirm a nominee before it adjourns on January 3, 2021.

Reasonably, one may expect that a new Justice will join with the existing conservative wing of the Court on variety of issues that affect Alaskans directly. Up to this point Chief Justice Roberts has frequently been a swing vote in important SCOTUS decisions, sometimes resulting in ambiguous outcomes. With a clear conservative majority, we may hope for clear direction to the agencies when it comes to the fulfillment of their statutory mandates.

To illustrate, one of the most onerous statutes in the U. S. Code is the Administrative Procedure Act (APA). This 75-year-old statute was enacted for just cause. Before the APA, the federal agencies were free to fulfill their substantive obligations by adopting guidelines that were unique to each branch but were wildly inconsistent with each other throughout our government. A purpose of the APA was to standardize the rules regarding how agencies met their respective missions.

Where, as is the case with most resource development projects, assuaging multiple agencies is a prerequisite to securing each one of the dozens of required permits, procedural consistency is critical. Nonetheless, incomprehensively SCOTUS read into the APA the additional notion that the affected agency is necessarily the best arbiter of its own mandate; accordingly, inconsistent decisions, whether in the form of regulations or other forms of decision-making, have become invincible unless in each case the high standard of "arbitrary, capricious, an abuse of discretion or otherwise not in accordance with law" is overcome. For all intents and purposes, this standard has barred the federal courts from dispensing substantial justice.

The current administration, whether it survives the upcoming election or not, deserves great credit when it comes to the pledge to clean the swamp by having forced some of the larger alligators out of the way; however, there still are many mosquitos that need to be eradicated.

Given that the agencies get to pick and choose who gets to do what, on the flimsiest legal authority, it must be the role of the courts to interject accountability into the equation.

Everyone recognizes that Alaska is a resource-rich state which, though sparsely populated, has the potential of producing vast quantities of mineral and hydrocarbon commodities to meet the needs of an expanding, demanding population. While many of those needs can be met from off-shore sources, in many cases the exporting nations have little qualms about the health and safety of its workers, the environmental impact on its producers, or the basic honesty of its administrators.

The argument is not for pollution – some of us are old enough to remember life before the National Environmental Protection Act (NEPA) and do not want to revert to that. Nor is the argument to do away with regulatory oversight or tribal consultation. The argument is for balance – the middle way.

The Army Corps of Engineers (Corps) is responsible for the management of 174 million acres of wet and submerged, resource-rich, lands in the State. The Corps has developed mountains of restrictive procedures for access to those lands. Its authority flows from the Clean Water Act, and its implementation of that authority is strident. The Corps' interpretation of its authority has been challenged before SCOTUS many times, yet for whatever reason, the Corps has not gotten the message.

In at least one of those cases, Chief Justice Roberts was the swing vote on the court, rendering an opinion which embraced neither the views of the liberal wing nor that of the conservatives. The result was that the Corps did not have clear direction and resumed business as usual.

Notably, if the Ginsburg vacancy is resolved by the appointment of a strict constructionist, there may be hope for balance when it comes to on-the-ground administration of the law in the future. Alaskans want to go to work. They want a level playing field. They want accountability in the context of bureaucratic oversight. The loss of Justice Ginsburg has closed a door but opened a window. May God have mercy on her soul and may her memory be for a blessing.