Appointment takes court over the hump

No one challenges reasonable federal regs when it comes to protecting the environment, but the operative word is "reasonable" North of 60 Mining News – October 30, 2020 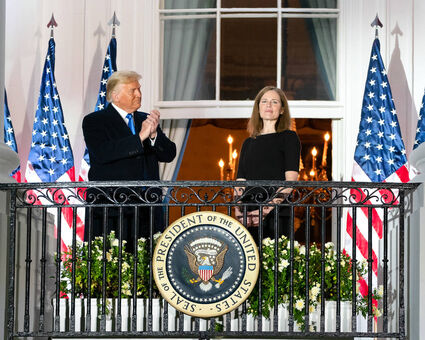 President Donald Trump applauds Amy Barrett during a ceremony celebrating her appointment as the newest justice on the U.S. Supreme Court.

The successful appointment of Justice Barrett to the U.S. Supreme Court has possibly put an end for the time being to the national drift to the political left. Without disparaging any advocates for social change, a welcome time-out may be expected in the relentless erosion in some of America's time-honored values. Political progress is always warranted in small doses, but the difference between a medicine and a poison is in the amount administered. Stating it otherwise, the proposed cures for many of our perceived domestic problems have recently proven more threatening than the underlying disease.

Although Justice Barrett has been thoroughly vetted by the Senate twice, once for her appointment to the Seventh Circuit Court of Appeals and now for the Supreme Court, most commentators have been hard-pressed to point to specific instances where she has articulated judicial decisions that are radical or destructive of broadly-held American values. On the contrary, she quite judicially has repeatedly stated that she comes to the Court without an agenda. Accordingly, it is a matter of speculation as to how she might vote on specific matters that the Court may hear in the future.

Notably, what may affect the mining industry in Alaska is the speculation about how she may resolve questions of administrative law. Seventy-five years ago, the Administrative Procedure Act (APA) was signed into law to standardize actions of federal agencies in the implementation of their statutory mandates. Since then, the Supreme Court has consistently taken the position that the respective agencies are the best arbiters for defining the parameters of their duties.

It is fair to say, however, that the process of developing regulations and implementing guidelines by the Executive Branch has often not been impartial.

As a result, agency decisions have frequently been challenged in the federal courts. Although APA cases are sometimes brought by Environmentalists who contend that the agencies have not done enough damage, that industry is not alone in wanting to review agency decisions. Oftentimes, it is private sector individuals and businesses that are most impacted by regulatory overreach. Until recently, judicial relief for that sector was perceived to be virtually quixotic.

This is not strictly an Alaska problem. Forum-shopping precipitates administrative challenges in different jurisdictions across the country, and District Courts often announce conflicting opinions. Appellate Courts, in turn, tend to compound the problem, adding another overlay and generating even more uncertainty.

Inevitably this results in a split in the Circuits, which is a common ground for Supreme Court review. Which brings us to Justice Barrett. Unfortunately, Barrett does not have a long track record from her time on the Seventh Circuit in dealing with administrative law issues. Accordingly, we cannot prognosticate on what her predilections might be.

On the other hand, the four existing solidly conservative Justices on the Court, Justices Thomas, Alito, Gorsuch and Kavanaugh, have solid track records on the question of judicial deference. Justice Kavanaugh especially has had his administrative law rulings from his days on the DC Circuit Court of Appeals extensively scrutinized. For him, the more liberal the agency's interpretation is, the more likely it will not be entitled to deference.

We note that Barrett served as a clerk for the late Justice Scalia, who was very outspoken in his views. Scalia once observed that, in using vague language in a law, Congress may have intended to give agencies some discretion to resolve issues, and in those situations the only question the Court needs to address is "whether the agency has acted within the scope of its discretion, i.e., whether its resolution of the ambiguity is reasonable."

While it is premature to project how or when Barrett will weigh in on issues arising under the APA, it is a safe bet that she will be called upon to opine on this topic early in her tenure at SCOTUS and that we may be hopeful that she will make a point of adhering to Scalia's "reasonability" principle.

All too often, the United States, Alaska's largest landlord, through its regulators, has put what the agencies wish was in the law ahead of what the Congress prescribed. The cost of challenging an agency interpretation through the judiciary is enormous and time-consuming. When the courts determine that an interpretation is entitled to deference, it can be very disappointing both to the applicant and the State which is reliant on its resource industries for revenue.

Alaska's future is tied to developing its mines and other resources. While we must pay obeisance to the statutes, it is a bridge too far to be compelled to knuckle under unreasonable agency regulations. We may take hope from this most recent appointment that, at a minimum, the rule of reason will prevail. The State is indebted to Senators Murkowski and Sullivan for their role in approving this appointment.