After Hyder mining ended, border town carries on through a symbiotic relationship with Stewart; a link severed by COVID North of 60 Mining News – November 25, 2020 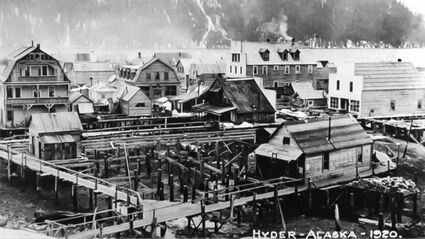 The discovery of nearby lodes of gold, silver, and tungsten, along with the mining happening around Stewart, British Columbia, sparked a boom in growth for Hyder, Alaska.

Resting on the eastern fringe of the Misty Fjords National Monument, at the head of Portland Canal, the Southeast Alaska mining town of Hyder survives through a symbiotic relationship with Stewart, a British Columbia mining town that lies just two miles (3.2 kilometers) to the east. Persisting for over a century as a town that identifies more closely with its Canadian neighbor than distant Alaska towns, Hyder found its lifeline being nearly cut off by the coronavirus pandemic.

Starting as a mining town like any other, the discovery of rich silver veins spurred the offshoot to what is now known as Hyder from its nearby neighbor, yet the success and boom of Stewart would not spread to Hyder until well after the first World War.

With a population that grew to over 250 people, over the years, the quaint Southeast Alaska community that has adopted an equally charming moniker, "Friendliest Ghost Town in Alaska," has dwindled to 87 people, according to the 2010 census. A more recent headcount, however, puts this number closer to 65.

Over the past century Hyder and Stewart have become so irrevocably connected that today the livelihoods and wellbeing of the residents of these American and Canadian mining towns are practically inseparable.

Yet, due to the widespread effects of the COVID-19 pandemic, the invisible line that divides the Hyder-Stewart community has become a lot more tangible with COVID-19 and the international travel restrictions that has come with it.

Hyder and its sister town of Stewart are pursuing survival through this challenging time as they have always done – as a unified community.

Before the fates of both towns became entwined, the area, home to the First Nations people of the Nisga'a, named the head of what would later be called the Portland Canal, "Skam-A-Kounst," meaning a safe place (safe house, strong house), presumably to escape the harassment of the Indigenous Haida on the coast.

While the land was first explored by Europeans in 1793, it would not be until 1896 when Captain D.D. Gaillard of the Army of U.S. Engineers would be ordered to investigate the Portland Canal, the waterway marking the Alaska-Canada boundary, that the area would begin to see European explorers once more.

While gold deposits were discovered in the Salmon River drainage in the late 1890s, Hyder and Stewart would not develop until the first decade of the 20th century.

Primarily in response to the high number of prospectors flooding the region in the wake of the Klondike Gold Rush, significant ore deposits were discovered in the coastal mountains at the head of the Portland Canal near the Salmon River drainage on both the American and Canadian side of the border.

A brief summary of the history of the district was penned in a 1929 United States Geological Survey report by L.G. Westgate, "Metal-bearing lodes, chiefly of gold and silver, were found in the Canadian portion of this region about 1898 [the year of the great Klondike gold rush], and similar discoveries had been made on the Alaska side of the boundary by 1901. These deposits received relatively little attention until 1909, when a small boom was started in the Canadian district. This boom, subsided in a few years, but meanwhile the town of Stewart and some 12 miles of railroad were built. Interest was revived in 1917 by the discovery of some rich silver ores on the Canadian side of the line, and in 1918 a commercial ore body was found at the Premier mine, which, though in the Salmon River Basin, is also in Canada. As a result, many claims were staked on both sides of the boundary, and the town of Hyder sprang up."

Due to its location along the Portland Canal, Hyder became the only practical point of access and supply to the silver mines in Canada, which was centered on the Premier gold-silver mine.

Yet, Hyder's boom would not truly occur until between the years 1920 and 1930 when gold, silver, copper, lead, zinc, and tungsten were extracted from the Riverside Mine on the Alaskan side of the border.

The discovery of rich silver lodes at and around Riverside caused a boom that swelled Hyder's population to a historic high of more than 250 people.

More than 50 other prospects in the Hyder area were reportedly similar to the Riverside and nearby Mountain View deposits. While most of these prospects were explored with trenches and pits, few were further investigated by underground.

Most mining ended in the immediate Hyder area in 1929, with nothing else taking place in the area until after World War II.

While mining and mineral exploration has been prolific around its neighbor of Stewart, there has been virtually no mining in the Hyder District since the World Wars except for a limited revival of Riverside from 1940 until 1950.

Even with the intermittent mining successes, Hyder continued to serve an important role as an access to two mines just across the Canadian border – Premier, the world's largest gold mine in North America at the time, and Granduc , a large copper mine that was accessed from a road from Hyder during its operations from 1964 to 1984.

You can read more about the history of Stewart at Deep roots beget renaissance for Stewart in the April 1 Edition of North of 60 Mining News.

Recent exploration efforts, by Decade Resources Ltd., however, have suggested another revival of the Alaskan side of the area, while on the edge of the famed Golden Triangle, samples taken showed significant gold concentration and may just be the impetus for a modern boom for Hyder.

These cycles of boom and bust that are inherent to most mining towns has only served to strengthen the bond between Hyder and Stewart since gold rush miners and prospectors settled these towns more than a century ago.

COVID-19 travel restrictions, however, had put up a barrier between the Hyder-Stewart mining community.

While those living in Stewart may not be feeling the effects as direly, Hyder had all but been cut off from the necessities of current living and the citizens of both towns sought a solution.

The town of Hyder is both the geographically easternmost and southernmost Alaska town that can be reached by car. Situated on the Southeast Alaska panhandle, however, one cannot drive there from the rest of the state.

As such, this quaint mining town is what is known as an "inaccessible district" by the Annals of the American Association of Geographers and is defined as "parts of the territory of one country that can be approached conveniently – in particular by wheeled traffic – only through another country."

Because of its remote location from any other census-designated place in the state, Hyder, with a fluctuating population of around 65 people, is often grouped with its Canadian neighbors in Stewart.

Due to this unique situation, residents of Hyder are basically cut off from the United States which makes the local residents much more dependent on Canada for their everyday needs.

The only accessible road is through Stewart, while the closest Alaskan city to Hyder is the southeast town of Ketchikan 75 air miles (121 kilometers) away. The Alaska Marine Highway System (AMHS) ferry that once connected Hyder to Ketchikan stopped running in the 1990s, leaving the Taquan Air floatplane that arrives twice a week with U.S. Mail or other goods, weather permitting.

Stewart is two miles (3.2 kilometers) away, by car.

Over the more than a century that has passed since the founding of Hyder and Stewart, residents have enjoyed nearly unrestricted access to the features in the neighboring towns just across the border. Canadians are free to cross the border into Hyder without checking in with a U.S. agent but must report to customs to leave Hyder for other U.S. locales.

Reverse-wise, Hyder residents only need valid identification to visit friends and family, go shopping, go to school, get gas, pay bills, visit the doctor and basically every other modern comfort or need not available in Hyder, easily found just ten minutes away in Stewart.

Neither town has a bank.

To save money, Hyder residents often team up to buy bulk orders of food or shop for goods online, all of which arrive on the mail plane.

Alaskans there set their watches an hour ahead of the rest of the state to match Stewart in the Pacific time zone, most of all the businesses price things in Canadian dollars, except for the post office. For years, Hyderites have sent their children over the border to the school in Stewart and the only grocery store for miles is located there. They set their area code to BCs 250 instead of the Alaskan 907 and even celebrate Victoria Day and Boxing Day each year.

Since the COVID-19 pandemic really got underway in March, residents were only able to go to Stewart once every seven days, for three hours for whatever they might need.

The solution to this was the aptly named "bear bubble," which allows Stewart and Hyder residents to freely cross into the neighboring town for their daily needs.

Read more about the ongoing situation with Hyder, Alaska at Reuniting a community separated by COVID in the Sept. 11 edition of North of 60 Mining News. 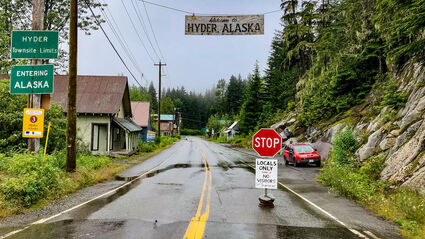 The Hyder, Alaska border as seen from Canada. Under normal circumstances, Canadians are legally allowed to visit Hyder without passing through U.S. customs.

As of the end of October, the concerted efforts of the communities living in Stewart and Hyder, contacted their local public representatives and pushed for a border crossing solution all the way up to the Alaskan legislature who penned a letter to the Prime Minister of Canada Justin Trudeau as well as other leading bodies in Canadian Government to ease the travel ban between the walking distance of Hyder and Stewart.

With such a move, the Canadian government announced a number of exceptions to the strict 14-day quarantine rules for some border towns, which include Hyder.

After seven months of restrictions, the Friendliest Ghost Town in Alaska began to move back to normalcy with their Canadian neighbor, while crossings may be limited for "necessities", children can enroll back into school and life can start to move again.

Although life is not like it was before, necessary visits between the symbiotic mining towns of Hyder and Stewart is a good first step to shifting the world back in the right direction.