The man who linked Seattle to Alaska gold 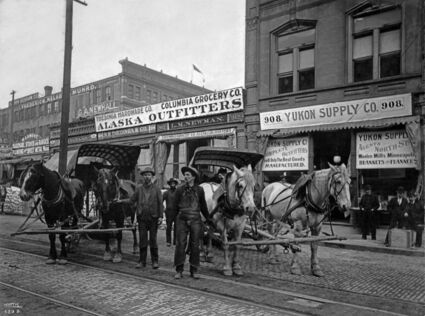 During the few years of the Klondike and Nome gold rushes, the streets of Seattle's business district were crowded with outfitters selling food and gear to thousands of men heading north to strike it rich in the Yukon and Alaska gold fields.

As the historian Murray Morgan once observed, Seattle residents "tend to look on Alaska as their very own... Seattle stores display sub-arctic clothing, though Puget Sound winters are usually mild; Seattle curio shops feature totem poles, though no Puget Sound Indian ever carved one."

This perception is possibly one of the largest legacies of the Klondike Gold Rush, which links Seattle and the Last Frontier in the public mind. Yet, the success and brotherhood shared between these Pacific Northwest locales almost never existed and the Emerald City of today could very well have never been.

Seattle was originally never destined as a major stopping point for miners heading to the Klondike gold fields. Rather, the much more well-equipped San Francisco port and the closer Canadian Vancouver were far more ideal for stampeders.

Prior to 1897, San Francisco dominated the maritime trade with Alaska and was home to many businesses with experience outfitting prospectors dating back to California's own gold rush. For Vancouver, it was closer than Seattle and the all-Canadian choice to Yukon's Klondike gold fields presented fewer disputes with customs officials.

Seattle, meanwhile, was at most a backwater with a reputation for forest products and not much else, as its economy before the Klondike gold rush was very poor due to the depression of 1882-1885.

However, due to an extensive advertising campaign designed and launched by the Seattle Chamber of Commerce and the clever strategies of Erastus Brainerd, a "Gateway to the Yukon" public relations war between the more established western ports and Seattle began.

With the arrival of the SS Portland bringing the legendary "Ton of Gold," the Seattle Chamber of Commerce formed a committee to draw anticipated gold rush trade for the tens of thousands of prospectors needing supplies. This was a golden opportunity for the stagnant city, which would hopefully become its jumping-off point.

And so, according to the Seattle Times, of which Brainerd himself once was editor for, "the local hysteria for Alaska gold was promoted by the Chamber of Commerce and its agent Erastus Brainerd, perhaps the highest of hucksters in our history."

Before Europeans settlers made it as far north and west as the area where Seattle now stands, the region that makes up the Pacific Northwest that extends north into Canada and into the Alaska panhandle and further north still, was inhabited by indigenous First Nations people.

For at least 4,000 years before the first Europeans, a people called the Duwamish tribe, occupied at least seventeen villages in the areas around Elliott Bay.

In 1851, a pioneering party made its way north to claim lands, led by Arthur Denny of Illinois, and like a successful run of Oregon Trail, settled down on Alki Point on Sept. 28 of that same year.

After a difficult winter, most of the Denny party relocated across Elliott Bay and claimed a second site at the locale of Seattle's present-day Pioneer Square, naming the new settlement, Duwamps.

Remnants of the earlier established Alki Point settlement, known as New York Alki, competed with Duwamps for dominance, but in time Alki was abandoned and its residents moved across the bay to join the rest of their original family and party.

It was then a man named David Swinson Maynard, or "Doc," one of the founders of Duwamps, who would advocate for renaming the settlement to Seattle after Duwamish and Suquamish tribes Chief Si'ahi – which was then anglicized as "Seattle" – and so on May 23, 1853, two years after its founding, the name "Seattle" first appeared on official Washington Territory papers and the first plats or maps for the village were filed.

Like most pioneering towns, Seattle suffered its cycles of booms and busts, rising economically due to exploiting various natural resources and then a period of precipitous decline, whether by transient fortune seekers or unfortunate disaster.

Surviving through several decades as a logging settlement, and the ethnic tensions of the anti-Chinese riots of 1885-86, it was the Great Seattle Fire of 1889 that burned the old and gave ashes for rebirth into a far grander city-center that rapidly emerged from its fiery demise.

The following year would unknowingly introduce a future preeminent figure in Seattle's history, and by the strange coincidences of life, and the public relations expertise of Erastus Brainerd, would set the future Emerald City on the path to greatness.

Born in Middletown, Connecticut, Brainerd attended Phillips Exeter Academy and Harvard University, from which he graduated at the age of 19 and then went to serve as curator of engravings at the Boston Museum of Arts.

Eventually he journeyed to Europe, where he found further success and was knighted by many orders that existed at that time, including the Knights Templar and the Freemasons.

Traveling back to America, he wrote editorials for the New York World and became an assistant night editor there, and then served as an associate editor at the Atlanta Constitution and Philadelphia Press.

Due to his ill health and a desire for new employment opportunities, Brainerd eventually decided to relocate to Seattle with his family and, being the gentlemen socialite that he was, quickly joined the many organizations and clubs there.

Then, on a typical wet northwest day, the USS Portland pulled into dockside in Seattle on the morning of July 17, 1897, arriving from St. Michael, Alaska loaded with prospector gold valued at the time around $700,000. Only a few days before, another ship, the SS Excelsior, had a similar voyage and pulled into San Francisco, also laden with $500,000 of gold from the Far North.

The Portland's arrival was nothing short of a bonanza. A staggering total weight of two tons of gold was unloaded before the day was done. Newspaper headlines of the day remarked that "sixty-eight men' had struck it rich, with "stacks of yellow metal," a tale of fortune that quickly spread like wildfire in the days and weeks that followed.

The Seattle Chamber of Commerce swiftly formed a committee to draw in the anticipated gold rush trade, where Brainerd was appointed chairman.

The battle for trade supremacy was on, and the Chamber would not let such an opportunity like this go for the struggling city, which was still feeling the remnants of the economic "Panic of 1893" that had hit Seattle particularly hard.

Brainerd, using his connections and experience in media, placed ads in newspapers all across the United States, proclaiming Seattle to be the "Gateway to the Yukon", even though it was not and convinced the Seattle Post-Intelligencer newspaper to print a special edition focusing on this exaggerated claim.

The media bombardment had begun, but it would not stop, next came a promotional pamphlet that left authorities in Europe so impressed they reprinted and distributed the circular for free.

Brainerd kept the publicity machine running by writing letters to every governor and mayor in the U.S., requesting information on "how many men to expect in Seattle" for the gold rush. Included in the letters were maps and guides to the gold fields, all of which led through Seattle.

By 1898, Brainerd had spent ten thousand dollars and had successfully branded Seattle throughout the world as the Gateway to the Yukon. Of the estimated 100,000 prospectors who headed to the Klondike, 70% travelled through Seattle.

San Francisco and Vancouver were left in the wake of the public relations wave that Brainerd bombarded the world with. Earlier mentioned as a public relations war, it is more apt to say that the starting gun had gone off and Seattle was closing in on the finish line before the other runners even realized the race had begun.

San Francisco staged its own Klondike publicity campaign in December 1897. A writer for a national magazine, however, characterized their effort as "a sluggish affair that paled beside the spirit displayed by Seattle."

Vancouver and Victoria in British Columbia also promoted the advantages of their cities and further warned prospective miners about the dangers of the adventure with the chance of finding no gold. Seattle also acknowledged the risks and wisely urged travelers to plan, prepare and guard against them by purchasing plenty of supplies – in Seattle!

During the following years after the successful campaign devised by Brainerd, prospectors needed to carry the vast quantity of those supplies purchased and the use of sled dogs became synonymous to Alaskan travel.

Numbers alone showed the impact of Brainerd's work as each man, by Canadian law, had to pack a ton of gear. At an estimated $1,000 a ton, Klondike goods and services deposited roughly $7 million in Seattle business coffers.

Furthermore, shipping flourished. In the decade between 1880 and 1890, Seattle had built eight ships a year. In 1898, Seattle turned out 57 steamships, 17 steam barges and 13 tugboats, and was soon the maritime center for Alaska – a title it holds to this day.

So, while it may seem like a war had been fought, the reputation of Seattle being the gateway to Alaska and the Far North was set and to this day this legacy can be witnessed in many of the motifs and styles of the northwest city. 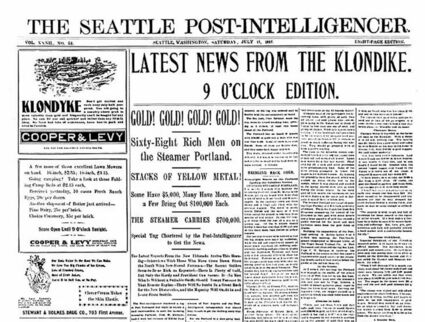 The front page of the Seattle Post-Intelligencer the day the USS Portland arrived into port carrying two tons of gold, an event that sparked the rise of Seattle as the Gateway to the North.

The relationship between Seattle and Alaska is so intrinsic now that many Alaskans regard Seattle as a second home and vice versa. Alaska Airlines is based in Seattle and the Seahawks are one of Alaska's top choices for American football teams – often considered the Alaskan football team. The port of Anchorage, the major supply point by sea for most of Alaska, receives the majority of its shipped goods out of Seattle.

It is safe to say that the Alaska – not just Seattle – of today would not be what it is without the efforts of Brainerd.

Today, Seattle residents look on Alaska as their own and this perception is the legacy of the Klondike Gold Rush but more importantly, the legacy of Erastus Brainard, who linked Seattle and the Far North in the public mind.

Brainerd would later pass away in Tacoma in 1922, forever known as "The Man who made Seattle."