When the benefits to Alaska of mining are compared to the benefits of Bristol Bay commercial fishing, sadly Seattle wins North of 60 Mining News – March 26, 2021 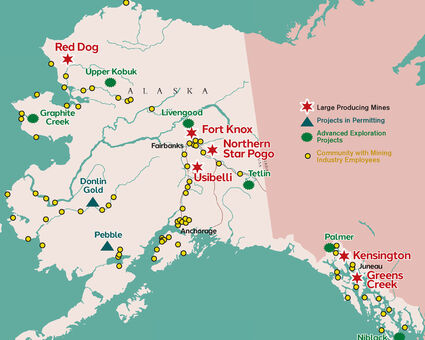 In February, the Alaska Miners Association (AMA) released its annual report on the Economic Benefits of Alaska's Mining Industry. That report highlighted the fact that 4,700 direct and 9,600 indirect jobs in the state are attributable to mining activities. In addition, $890,000,000 (not counting benefits) in direct and indirect payroll are earned by Alaskans and another $880,000,000 are spent on goods and services purchased from Alaska's vendors.

Although the BBDF report does not purport to describe the entire fishing industry in Alaska – it was clearly a hit piece aimed at the Pebble project – it is independently interesting because when contrasted with the AMA report it highlights who gets the benefit of Alaska's various industries. In a word, while the products of both sectors are marketed outside the State, significantly more of the revenue generated by the recovery of mineral resource circulates here than is the case with fishing.

After oil and gas, mining and fishing have long competed for the second-place position as contributors to the State's economy. Although a component of the fishing industry is composed of Alaska residents, by contrast, the vast bulk of the mineworkers live in Alaska communities, spend money in the State and raise their kids here.

The argument is often made that the fishing industry is renewable, and therefore will last forever if protected; however, the same could have been said of the timber industry until protection went a bridge too far and timber harvesting was eviscerated.

Individual mines may not last forever, but there is a long list of very large deposits waiting in the wings for their turn in the sun. In the meantime, the six large operating mines in the State keep chugging along, decade after decade, without an end in sight.

The crazy thing about the BBDF report, however, is not that it underscores how the Bristol Bay fishery actually costs the State of Alaska money – inferentially Alaska is subsidizing the fishery so that the Seattle fishing fleet can prosper. It also single-mindedly implies that the Pebble project, which would not just contribute to the State's coffers but would enhance progressive causes by providing necessary copper for an endless list of modern necessities such as wind turbines and electric cars, is an unnecessary evil.

The fundamental argument opponents make against the Pebble project is that, in the land of earthquakes and volcanoes, the Bristol Bay fishery might be adversely impacted if a mine were developed nearby. Were Pebble brought into production, however, there is no reason to conclude that it would precipitate or exacerbate the destruction that might be wreaked on the Bristol Bay highlands in the improbable case of a catastrophic tectonic event. If the event were severe enough to challenge a project impoundment area, for instance, the impact on the fishery would be virtually identical whether the mine was there or not.

The counterpoint, as is demonstrated by putting the BBDF report side-by-side with the AMA report is that the economic benefit of Alaska's mines to the people of Alaska far exceeds the benefit Alaskans derive from commercial fishing. That is not to suggest that both industries cannot thrive simultaneously, but only that it is a misperception to conclude that it is a binary choice.

America needs Alaska's mines just as it needs Alaska's salmon, except that giving away our fish rashly assumes that the resource and the market will always be there, whereas indubitably, the national and global demand for copper wire and water pipes is not likely to ever be exhausted.