Fighting for over a century the Tahltan people survived near extinction to protect their lands and millennia of tradition North of 60 Mining News – May 28, 2021 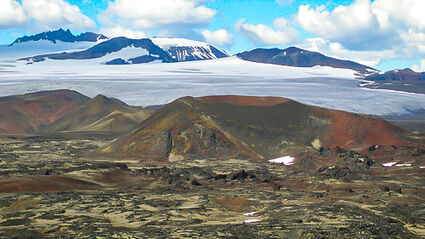 The Tahltan people began mining obsidian from Mount Edziza for their own use and trade as far back as 10,000 years ago

From the Coast Mountains in the west to the lower parts of the Yukon's Boreal forest in the north, the Cassiar Mountain range in the east, and the headwaters of the Nass and Skeena Rivers in the south, an ancestral indigenous people known as Tahltans has called Northern British Columbia home for thousands of years.

According to a 2003 sourcebook prepared by the Museum of Anthropology entitled "Mehodihi: Well-Known Traditions of Tahltan People," the Tahltan Nation, which contemporarily signifies membership and governments of both the Tahltan First Nation and Iskut First Nation, claimed representation for 6,000 people, with 1,600 residing in their communities.

Today, the Tahltan Central Government represents approximately 5,000 members, with many living outside the traditional territory.

Tahltan people historically comprise two main clans founded on a matrilinear society with intermarriage between them. Matrilinear, meaning that crests and inheritances are passed down through the mother.

Since time immemorial, this system had provided the basis of Tahltan law and governance. Despite the imposition of a settler society from the government through the Indian Act, the matrilinear system remains the foundational governing structure of the Tahltan people.

The Tahltan Nation is divided into two clans, the Tsesk'iya (Tses-kee-ya), the Crow, and Ch'ioyone (Chee-oanah), the Wolf, further divided into several family groups.

Similar to other northern native cultures, the Tahltan passed down knowledge of behavior and wisdom through stories, particularly legends of the Crow and the Raven, that continue to guide Tahltan people about the best way of living, with principles of determination, generosity, and resourcefulness, among many other traits.

However, unlike many tribes, independence was won, and sovereignty for their home and lands was hard-fought, yet not without strife and struggle.

As the lands are closely tied to one of the most abundant and wealthy resource areas on the planet, the Golden Triangle, Tahltan's sought rights for their land and people as early as 1910, creating the Declaration of the Tahltan Tribe, which functions as a guiding principle for the Tahltan Government to this day.

During that time, a Tahltan chief called Nanok, along with 80 other members of the tribe, signed this declaration, claiming sovereignty over Tahltan land, and declared any land interests concerning the traditional territory of the Tahltan Nation to be settled directly with the Tahltan people.

Even after this, many disputes and land rights battles occurred throughout the century since the inception of the declaration, with issues and disagreements over misrepresentation or mining industry exploitation happening even now.

First contact with Europeans came in 1838 when Robert Campbell of the Hudson's Bay Company arrived with the intention to set up operations in the territory.

The company's post was established at the source of a mountain stream, known as "Talh'ah," or "Head of the Lake."

This post at Dease Lake became a popular stop on the gold rush trail during the 1864 and 1873 Stikine and Cassiar Gold Rushes.

It was not until the Klondike Gold Rush in 1898 that the Tahltan Nation saw a massive influx of Europeans to their territory.

As the Tahltan were traditionally a nomadic people, traveling throughout the year for hunting, trapping, and gathering berries and roots only to return to established salmon fisheries in the spring, they did not have a permanent settlement.

But the arrival of prospectors during the three gold rushes brought changes to their traditional way of life. They began working for wages and adopting non-native practices instead of subsisting or living off the land.

When prospectors set up mining camps in the territory in the early 1860s, they brought with them diseases such as smallpox, measles, influenza, and tuberculosis. The smallpox epidemics of 1864 and 1868 contributed to the near decimation of the Tahltan people, and by 1900, the population had reached an all-time historic low of 296.

This extreme population decrease, coupled with the new enforcement of governmental policies, forced the Tahltan people to leave their established village sites for a more central location along the Stikine River.

As the remaining people moved to their present home at Telegraph Creek, it was there the Declaration of the Tahltan Tribe was penned.

"We claim the sovereign right to all the country of our tribe – this country of ours which we have held intact from the encroachments of other tribes, from time immemorial, at the cost of our own blood. We have done this because our lives depended on our country. We have never treated with them [Europeans], nor given them any such title." From the first statute of the Declaration of the Tahltan Tribe.

Historical geological dating by the Royal BC Museum suggests that as far back as 10,000 years ago, the Tahltan people mined and traded obsidian.

Anthropologists found that because the material occurs in a limited number of regions, it was determined to be a valuable resource in reconstructing ancient trade networks. Artifacts that were crafted from obsidian were analyzed to show which quarry the raw material came from.

As a main source of obsidian in the northwestern part of British Columbia occurs at Mount Edziza above the Skeena River, it was determined that obsidian from this area found its way to Alaska and northern Alberta as early as 10,000 years ago.

Inter-community trade was also very important to the Tahltan. Exchanging copper, eulachon oil, and shells brought from the coast by the Tlingit to camps situated between Telegraph Creek and the Tahltan River for the Tahltan's own leather goods, obsidian, and snowshoes.

Most Tahltan families recognized the trading center around Telegraph Creek as a centralized gathering place and visited there at least once a year. Trade was also conducted with the interior Kaska and Sekani peoples.

While disputes and protestations occur to this day regarding the development and usage of Tahltan land, mining has been a part of Tahltan heritage for millennia. Today, more than 50% of all mineral exploration and mine development in British Columbia takes place in Tahltan territory, however, the Tahltan people have not always benefitted from these activities in their homeland.

In July 1976, at a First Annual Gathering of the Tahltan people, a collective decision was made to unite the people under a democratic system that would represent the interests of the Tahltan Nation, thus formed the Association of United Tahltans.

Then in 1985, the Association of United Tahltans was renamed to the Tahltan Tribal Council, dissolved from 1998 to 2001, and was reinstated and renamed once more to the Tahltan Central Council, which exists to this day.

Despite the rocky governmental establishment, the Tahltan Nation preserved and flourished, adapting as they have done for centuries and creating many organizational bodies and establishments to further protect their sovereignty.

Respect is a two-way road

With the efforts the Tahltan Central Government has made throughout the years, it has provided incredible wealth and opportunity for the westernmost Canadian province.

The Golden Triangle is indisputably one of the most lucrative and bountiful resource areas on the planet, home to some of the highest-producing precious metal mines in the world.

Gold, silver, copper, and today with the growing demand for critical minerals and rare earth elements in the development of clean energy and zero-carbon technologies, more and more resources will be needed to transition the world to green energy technologies.

The Tahltan Central Government has been instrumental in setting an example of the appropriate approach to mineral exploration and extraction.

Disputes with Royal Dutch Shell over coal-bed methane extraction; Doubleview Gold Corp. over its disrespect of the established resource development policy; and even more recently, a demand for the Discovery Channel to stop airing "Jade Fever" for the "reality" show's misrepresentation of mining practices in Tahltan territory are just some such examples.

While this may seem like an overbearing and hardline approach, forestry, fisheries, and mining have been just a few of the colonial plundering and ruthless human and environmental depredation that the territory has had to deal with throughout the century.

To hold on to protected and sacred locations, the Tahltan Nation has begun to crack down on abuses in their territory, even after the inception of its resource development policy where they stated, "they are not inherently opposed to any type of business or resource development in its traditional territory."

Mining giants from Teck Resources Limited to Rio Tinto have signed consent agreements with the Tahltan Central Government, showing just how much might the Nation has over their lands today, a rare sway over mining never before seen from any other aboriginal tribe.

Yet the Tahltan Nation is anything but against mining and mineral exploration, recently tying closely with Skeena Resources Ltd. by purchasing 1.6 million shares of the exploration company established around the prominent Eskay Creek and Snip gold mine projects in their territory.

"Mining has always been a part of our culture, both in the past and in present-day times. For thousands of years, our people prospected, mined, and utilized obsidian for tools, weaponry, and trade," said Tahltan Central Government President Chad Day. "More recently, Tahltans supported miners during the gold rush and have had operating mines in our homelands for multiple generations." 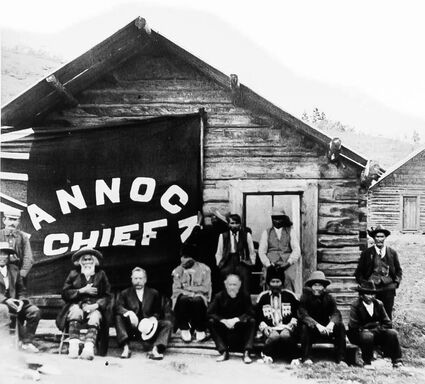 A photo taken before 1913 of Tahltan Chiefs, possibly the same men who signed the Declaration of the Tahltan Tribe.

Supplementing this stance, as early as 2013, the Tahltan Nation utilized its input for sustainability by providing a wide range of services to the mining and mineral industry, such as exploration services, reclamation and restoration, environmental monitoring, social and cultural monitoring, and even recruiting and placement services.

It is evident that the unique position the Tahltan Nation has, in conjunction with the position of its ancestral home in one of the most abundant resource areas, has provided a one-of-a-kind circumstance that even after sitting on an estimated 50.6 million ounces of gold and 12.5 billion pounds of copper, the Tahltan Central Government still puts its home first.

From less than 300 men and women and the 80 who signed the declaration over one hundred years ago, it is clear the Tahltan Central Government is adhering to the ideals, hopes, and traditions of its lands and the dreams of those individuals who determined to make a stand all those years ago.

EDITOR'S NOTE: This article was updated on May 28 to remove an inaccurate paragraph relating to Newmont Corp.