The COVID elephant has left the state

The CDC may be slow, but officials there take their mission very seriously and do not enjoy being out of step with science North of 60 Mining News – May 28, 2021 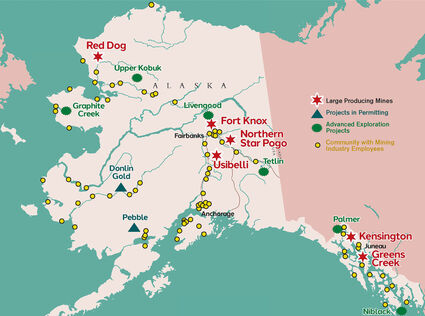 Alaska is well endowed with precious, base, and strategic minerals that the world will need healthy supplies of as the long-term effects of the COVID crisis unfold.

Although new cases of COVID-19 are still appearing throughout the nation in general and Alaska in particular, at the moment they are hovering at the 40-per-day level apparently. The vaccine is working. Operation Warp Speed succeeded in making it safe for most people to go most places most of the time safely.

This is good news, especially for those who make their living in remote locations, such as exploration geologists and placer miners.

It is fair to say, I think, that the mining industry's preoccupation with safety has, over the past fourteen months, paid off.

While Alaska tourism took a major hit, and while there was a bit of a scare in the fishing industry, it does not appear that miners have been a major Covid vector. Unfortunately, the Alaska Department of Health and Services Coronavirus Response Hub does not seem to accumulate data by occupation.

Nonetheless, by reviewing the data by region, and compounding those data with general information about the inoculation rate and the pronouncements by the Center for Disease Control, it is justifiable to project that the current downward trend of infection will continue into the future.

The mining industry has already taken that into account, as can be seen by the anticipatory activity level across the State.

Exploration operations by their nature tend to reduce significant exposure, and the current logical guidance is that the infection does not readily spread outdoors, especially when obvious guidelines such as the use of masks and respect for maintaining reasonable distances are followed. But it is unequivocal that vaccination is dispositive.

Globally, on the other hand, we may infer that the worst is yet to come. India is reporting in excess of 4,500 deaths per day. Statistics for Africa and parts of South America seem to be unreliable. The hope of vaccines for distribution in third-world countries is still remote.

Inferentially, that means the associated economic impact on a world that depends on resource recovery is likely to echo for decades.

In regions where resource development is the base of the economy, the inability of the local government to control the pandemic not only means death and disruption for the affected industries but also the dependent multipliers. Essentially, for many parts of the world, the economic devastation that will flow from the crippling of key industries may be worse than the pandemic itself.

We may expect America's foreign policy to be driven by the moral need to aid those countries who lack the wherewithal to protect themselves. But no matter how much foreign aid the "rich counties" are able to distribute, it will not be sufficient to restore the production of resources to pre-pandemic levels at a rate that matches the demand for the associated commodities any time soon.

As has always been the case, Alaska's mining industry will continue to be the citadel on the top of the hill as the long-term effects of the COVID crisis unfold. Not only has the mining industry in the United States been one of the safest industries for a very long time, as well as one of the most regulated industries and one of the most environmentally sensitive industries, but it now appears that it will be pulled, if not pushed, into being the primary producer of required metals.

One need only look at the literature to see that Alaska is well endowed with strategic minerals from antimony to zinc. Copper, for instance, can be mined in many locations, but if key copper properties are situated in economically weakened, post-pandemic locations, the inability of the host country to mine and distribute the resources will necessarily mean the copper must be sought elsewhere, and there is no better elsewhere than Alaska.

While in the past it has been easy to tolerate the NIMBYs who exercise their First Amendment rights to pointlessly block mining in the nation's storehouse – their reckless disregard for the cost of their obstreperousness to the contrary notwithstanding – in the world after COVID, predictable shortages of critical materials will force modifications of public policy in the direction of domestic recovery.

Without putting too fine a point on it, mining in Alaska continues to have a bright future if for no other reason than because we are endowed with resources which will be foreseeably stressed elsewhere.