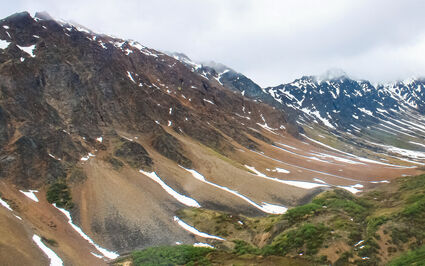 Rock samples collected from Monte Cristo in 2010 assayed up to 4.2 g/t gold and sampling of talus accumulated at the base of steep rock faces returned grades as high as 3 g/t gold.

Alaska's largely untapped mineral potential continues to draw the interest of Down Under mining companies, including two Australian minerals explorers that picked up prospective land packages open to staking.

This will begin with investigations of four priority prospects – Monte Cristo, St. Eugene, Old Man Breccia, and Old Man Diorite – that were explored about a decade ago but fell by the wayside due to tough market conditions in 2011.

Rock samples collected from the Monte Cristo prospect in 2010 assayed up to 4.2 grams per metric ton gold and sampling of talus fines, rocks accumulated at the base of a very steep rock face, returned grades as high as 3 g/t gold.

Upon closing of the acquisition, Ragusa plans to develop an exploration strategy for Monte Cristo and intends to secure experienced consultants to assist with advancing this new Alaska gold project.

In addition to Monte Cristo, Ragusa owns the Lonely Mine gold project in Zimbabwe and is acquiring the Burracoppin halloysite, an aluminosilicate clay mineral, project in Western Australia.

"The proposed acquisitions will diversify Ragusa's global footprint and provide an opportunity to utilize our exploration and development experience to rapidly progress both projects, given their prime positions adjacent to major gold and halloysite projects in Tier 1 jurisdictions," Zuvela said regarding the Monte Cristo and other recent Ragusa acquisitions.

Zuvela also happens to be chairman of Discovery Africa, an Australian-based company that picked up the Chulitna project in Southcentral Alaska earlier this year.

During a two-week program carried out earlier this summer, an Alaska-based geological firm collected 166 rock and 86 talus fine samples, as well as carried out geological mapping across various prospects.

This reconnaissance exploration focused largely on Partin Creek, where historical mapping, trenching, and rock chip sampling carried out by the U.S. Bureau of Mines identified two gold-silver-copper prospect areas. Samples collected from one of these prospects in 1974 returned grades of up to around 7 grams per metric ton gold and 0.7% copper.

The samples have been shipped to a laboratory for multicommodity analysis – assays are pending.

The Australia-based exploration company is seeking other Alaska projects to add to its portfolio.