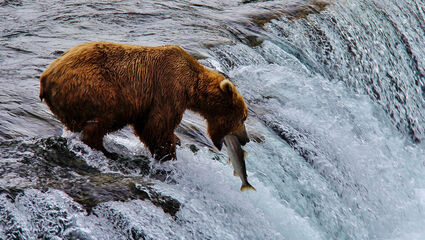 The Bristol Bay region is home to two resources that beyond a doubt earn the moniker "world-class" – an annual run of sockeye salmon that is second to none and Pebble, the largest undeveloped copper and gold deposits known to exist on Earth.

These world-renowned resources, however, have stirred up controversy in this Oklahoma-sized region of Southwest Alaska, as many of the roughly 7,400 Bristol Bay residents are concerned that mining the copper, gold, molybdenum, rhenium, and other metals stored at Pebble could put the salmon fishery at risk.

For many years, Bristol Bay Native Corp. took a neutral stand on Pebble, which is on state lands within the Alaska Native Claims Settlement Act (ANCSA) corporation's resource-rich region of Southwest Alaska. In 2009, however, BBNC came out in opposition to the proposed mine, citing "unquantifiable risks to the fishery and subsistence resources in the region" as the basis for this stance.

"BBNC's firm opposition to Pebble is consistent with the values of cultural and economic sustainability to which we hold ourselves," said BBNC Chairman Joe Chythlook.

While the ANCSA regional corporation has "fish first" values in Bristol Bay, it does not have an outright opposition to mining or other responsible resource development across the 62,500-square-mile region.

This varied and resource-rich landscape drew Yup'ik, Aleut-Alutiiq, and Dena'ina Athabaskan people to the Bristol Bay region more than 10,000 years ago.

While these three groups brought with them distinct languages and customs, over the centuries they overcame any differences to build a thriving network of traders.

Today, the descendants of these discrete yet cooperative first settlers of Bristol Bay make up the more than 10,000 shareholders of BBNC.

The same resources that formed the basis of the subsistence and trade economies of these first people of "a place that's always been" drew Russian and western settlers to Bristol Bay in the 18th and 19th centuries.

Danish cartographer Vitus Bering was the first western explorer to sail across Bristol Bay during an expedition for Russia in 1741.

It was famed British Explorer Captain James Cook, however, who named Bristol Bay while navigating the southern coast of Alaska during his final voyage in 1778.

Over the ensuing two centuries, Russia claimed Alaska, sold it to the United States, Alaska became a state, and ANCSA was passed.

Under ANCSA, village corporations in the Bristol Bay region received title to 3 million acres of surface estate and BBNC, the regional corporation, received subsurface rights to the same lands.

These land selections were prioritized around subsistence and traditional uses, as well as the potential for natural resource development.

Some of BBNC's most promising mineral lands are found on the Alaska Peninsula, a tectonically active and geologically young area on the Pacific Ring of Fire.

The Alaska Peninsula and Aleutian Islands, which extend roughly 1,200 miles to the southwest, are being formed as the Pacific Ocean plate dives under the North American plate. This dynamic geology is especially prospective for epithermal gold and intrusive-related deposits such as copper- and gold-rich skarns and porphyry mineralizing systems.

BBNC's Alaska Peninsula properties were last explored by Millrock Resources Inc., which cut a deal with the Southwest Alaska corporation in 2012 to investigate the mineral potential across a roughly 500,000-acre land package that covers a more than 75-mile stretch of the peninsula known to host copper, gold and other metals.

Kawisgag, situated toward the southern end of this land package, is a porphyry copper-gold-molybdenum prospect located about four miles east of the village of Ivanof Bay and within two miles of tidewater.

Grab samples of porphyry-style mineralization at Kawisgag have returned as much as 6.2 grams per metric ton gold and 1% copper.

The strong mineralization at Kawisgag is recognizable on surface by a three-square-mile color anomaly created by the oxidization of the sulfides there.

Exploration by Resource Associates of Alaska from 1979 to 1982 targeted gold in a quartz-arsenopyrite vein system in the northeast corner of the prospect that is traceable for more than 730 meters. In addition to gold, rock samples collected by Resource Associates contained promising quantities of copper, molybdenum, and silver.

Cominco Ltd., drawn to the copper-gold porphyry potential, further explored Kawisgag with mapping and sampling in 1989 and 1990. Rock samples collected by Cominco returned as much as 6.2 g/t gold, 8.1 g/t silver, 0.28% copper, and 0.1% molybdenum.

BBNC's lands department said the metals potential turned up by this reconnaissance-level work warrants further exploration, including first-pass drilling, and the corporation is looking for a new partner for Kawisgag and its other properties on the Alaska Peninsula.

Another four BBNC Alaska Peninsula prospects that deserve further investigations are located near Chignik, a village about 50 miles northeast of Ivanof Bay.

Two of these – Mallard Duck and Warner Bay – are situated roughly 10 miles south of Chignik.

On lands owned wholly by BBNC, Mallard Duck hosts a large alteration zone that was first recognized by prospectors at the turn of the 20th Century.

More recent exploration at Mallard Duck, also referred to as Mallard Duck Bay or MDB, has included mapping and sampling by Bear Creek Mining and Resource Associates in the 1970s and 1980s; polarization and ground magnetic surveys completed by Full Metal and Metallica in 2008; and mapping, sampling, geophysics, and drilling by Millrock and First Quantum Minerals in 2014.

While this work has identified swarms of veins containing gold, silver, copper, molybdenum, zinc, and lead within a 15-square-mile area, an economic porphyry copper-gold deposit has yet to be identified at Mallard Duck.

Warner Bay, which is just south of Mallard Duck, is an even earlier staged porphyry prospect on lands owned by the village corporation Far West Inc. (surface) and BBNC (subsurface).

Bee Creek, which has also been referred to as Dry Creek, is another porphyry prospect about 15 miles north of Chignik.

Similar results were encountered in two holes successfully completed by Metallica Resources and Full Metal Minerals in 2006, including a 118-meter intercept averaging 0.32% copper and 0.21 g/t gold.

Following up on the historical work, sampling and mapping by Millrock and First Quantum geologists in 2014 and 2015 outlined a core zone at Bee Creek rich in copper, gold, and molybdenum surrounded by a halo of anomalous zinc, lead, and manganese.

Millrock and First Quantum narrowed targets for drilling with induced polarization geophysics. While this 2015 drill program encountered promising porphyry copper-gold mineralization, the results were not strong enough to encourage First Quantum to fund additional drilling on the Alaska Peninsula.

A deposit of high-volatile bituminous coal is also found on BBNC lands near Chignik.

This near tidewater coal could provide a power source for mining any economic copper and gold deposits turned up in the region or could easily be shipped to Pacific Rim customers.

In addition to the mineral prospective lands on the Alaska Peninsula, BBNC owns two properties south of Lake Iliamna – KUY and Fog Lake – that show the potential for high-grade gold.

Situated about eight miles south of the village of Kokhanok, KUY has shown the potential for high-grade gold and silver.

Resource Associates of Alaska discovered bonanza grade gold-silver telluride mineralization at KUY in 1980. Samples from two quartz veins within the Discovery zone – Discovery and Amethyst – contained as much as 56 oz/ton gold and 163 oz/ton silver.

Two areas of lower grade gold and silver – Swale zone and East Bench – were later discovered outside of the Discovery zone. Rock samples collected at Swale returned as much as 0.34 oz/ton gold and 0.73 oz/ton silver.

Five holes targeting the Discovery vein in 1980 and another four drilled by Andover Mining in 2007 and 2008 did not encounter ore grade mineralization, leading geologists to determine these veins to be highly discontinuous and an unlikely target for future drilling.

There currently is not enough information on KUY to allow for a definitive interpretation of the geological environment there. However, evidence indicates that there could be a nearby porphyry deposit, something this part of the Bristol Bay region is known for.

Further interpretation of the data from geophysics carried out by Resource Associates and Andover could help narrow future drill targets on this property.

BBNC owns both surface and subsurface rights of the core area of KUY, while southern extensions of this prospect trends onto state lands.

Most of the gold mineralization identified so far at Fog Lake occurs in 0.25- to 1-inch-wide subparallel massive sulfide veinlets. More than 40 veins were identified in a 1,800-foot section exposed in the Fog Creek gully, in concentrations of up to five to eight veins per foot.

Two holes drilled at Fog Lake in 2008 returned anomalous copper and gold associated with quartz and pyrite veins. The highest-grade intercepts from the 305 meters of drilling include 2.15 meters of 1.48 g/t gold and 0.08% copper and one meter of 2.85 g/t gold.

The mineralization in these holes, nor the narrow veins identified in Fog Creek, seems to explain the large gold anomaly identified on surface and BBNC geologists believe an epithermal gold system may be present under shallow overburden.

Additional geophysics would likely be the next step in narrowing drill targets at this prospect south of Lake Iliamna.

Developing socially, environmentally, and fiscally sustainable mines at these and other mineral deposits could add jobs and other economic opportunities in the Bristol Bay region.

Like many of Alaska's rural areas, the Bristol Bay economy is a mix of subsistence – gathering wild resources for food, shelter, clothing, crafts, and other purposes – and cash.

"Households use money to purchase fuel, electricity and family goods – such as clothing and shelter. Residents also use cash to pay for equipment used for subsistence activities: guns and ammunition, fishing nets, boats, all-terrain vehicles and snowmachines," BBNC penned in a presentational guide of the Bristol Bay region.

The cash component of the economy comes primarily from jobs connected to the commercial fishing industry in the region, along with government and health care.

Many fishing jobs, however, are seasonal.

In addition to resource development, BBNC sees investing in small businesses within the region as a means of bolstering and diversifying the cash component of the Bristol Bay economy.

Toward this end, Bristol Bay Development Fund, created as a BBNC subsidiary in 2014, is investing $5 million into the Bristol Bay economy over an 11-year span.

This investment aims to provide multiple layers of benefits to shareholders living in the Bristol Bay region – expanding shareholder-owned businesses; providing new job opportunities; and improving the quality of life through the new goods and services provided by these new businesses.

"Small businesses are really the heartbeat of a community, and it's important for us to support that," said BBNC CEO Metrokin. 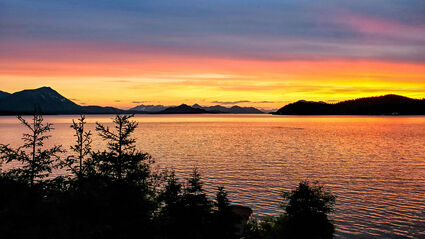 A midnight sunset paints the landscape near the Aleknagik, one of the 31 villages found in the Bristol Bay region.

To spur these new ideas, BBNC and the development fund have launched "Path to Prosperity," a business development competition aimed at developing socially, environmentally and fiscally sustainable small businesses in the Bristol Bay region.

After awarding a total of $50,000 to three Bristol Bay businesses in March, the Bristol Bay Development Fund Path to Prosperity competition has given out $100,000 in prize money.

"The winning companies offer a genuine care for their communities and their product or service," said Bristol Bay Development Fund Manager Cindy Mittlestadt. "It will be fun to follow these companies and the prior year's awardees to measure their successes."

For BBNC, this investment in local small businesses supports its efforts "to protect the land in Bristol Bay, celebrate the legacy of its people, and enhance the lives of its shareholders."