What Rights to Land Have Alaska Natives 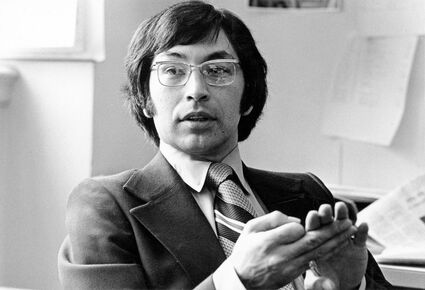 After writing the research paper, "What Rights to Land Have the Alaska Natives: The Primary Issue," a young Willie Hensley realized Alaska Natives were on the precipice of losing total control of their traditional lands and set out on a mission that led to the Alaska Native Claims Settlement Act.

It is my good fortune to be asked to write a short piece on the Alaska Native Claims Settlement Act. My mother, Naungagiaq, would have been proud. She set me free to seek an education in a Tennessee boarding school when I was 14 – just at the time of my life that I could have been of help to her and the family in our hunting, fishing, and trapping world of the 1940s and 1950s. We had lived in three sod homes along the Little Noatak about a dozen miles from Kotzebue. She, in a way, sacrificed me so that I might have a chance to learn English and a trade and return to help her and our people. I know it was hard for her and the family to let me go.

This was before the snow machine came along and dogs were our means of winter travel. Our sources of food were many and varied-caribou, fish of all kinds-shii, trout, white fish, pike, lingcod, flounder, tomcod and Arctic char. We hunted seals and beluga in the spring and summer as well as caribou, rabbits, ducks, geese, and ptarmigan. We collected edible plants and berries. For income, we trapped for land otter, fox, bear, muskrat, wolf, marten and an occasional polar bear. Our dependence on the western world's goods was limited and there were no expenses such as rent, electricity, tv, garbage collection, the internet, telephones, or life insurance. It was a different world than today. What we didn't know was that our way of life and our relationship with the land and the animal life were going to come under extreme pressure in just a few short years.

The Bureau of Indian Affairs ran the schools, and their mission was to do everything possible to erase our languages, culture, and history. In the mind of Sheldon Jackson, the first director of education for the federal government back in the 1880s, their job was to prepare us to be the workforce of the emerging White majority. As a result, few Alaska Natives were exposed to any history of their people, the laws that governed relationships between the tribes and the government, nor anything whatsoever about the Russian colonial period, or the transfer of their interests to the United States in 1867. Nor did we know anything about the treaty or other laws that would have an impact on our lives and our lands and our institutions.

When I returned from four years of boarding school in East Tennessee and after graduating from George Washington University in 1966, I was a blank slate regarding not only Alaska history, but the history of my own Inuit people and that of all the other indigenous societies that occupied all of Alaska. The good news was that I had clung on to our language that I had absorbed as a child, as well as many of the values that guided the lives of our people in those days. The sense that your life was yours but there was an inherent obligation to help others. The notion of sharing...including knowledge, was strong. That was a part of the Inupiaq DNA.

I became conscious of the huge role of the Bureau of Indian Affairs in the life of American Indians and Alaska Natives through their control of the education system and the Indian health service.

As a college student I volunteered at the National Congress of American Indians when Vine Deloria became the president. I often wondered why Alaska was not more represented in the organization. Only the Tlingit were strongly represented. I saw how the tribes constantly appeared year after year petitioning Congress for help in all areas of their lives – schools, health care, roads, economic development, housing. I used to wonder, "where are our leaders from Alaska?"

After graduating from George Washington University, I enrolled at the University of Alaska to do graduate work in finance. I discovered there was a Constitutional Law course that was being taught by Judge Jay Rabinowitz and decided it might help me understand what the legal relationships were between Alaska Natives and the federal government and with the then seven-year-old State of Alaska.

In my loneliness for Alaska news, I used to read old Alaska newspapers at the Library of Congress and noted that there was a controversy developing due to the new state selecting huge chunks of Alaska lands that the villages said belonged to them.

I decided to write my research paper on the issue and titled it "What Rights to Land Have the Alaska Natives: The Primary Issue." That research enabled me to reach the conclusion that Alaska Natives were on the precipice of losing total control of their traditional lands and no one was there to protect them. That realization was so overwhelming that I could barely sleep, and I knew that something had to be done. Otherwise, we would only be offered the opportunity to spend the next century litigating in the Court of Claims for a few cents an acre and no land whatsoever. (I had learned that the Tlingit and Haida had spent 35 years in litigation and only ended up with $7.5 million and not one square inch of land in Southeast Alaska. I knew then that the old system of compensation was completely inequitable.)

Three primary comprehensions inspired me as a consequence of my research paper:

• The 104 million acres the Congress promised the new State of Alaska was going to be taken from Alaska Natives with no hearings or compensation despite the "disclaimer provision" in the act.

• The moment the Secretary of Interior signed an "interim conveyance" to the state, if there was ever any hope of Alaska Natives securing that land, that signature was an "extinguishment" of aboriginal title, and the land could never ever be retrieved.

The Court of Claims and Indian Claims Commission process was less than impecunious in its lack of equity, expensive, time-consuming, and resulted in no land being conveyed to indigenous claimants. The land was valued "at the time of the taking" which for Alaska Natives could have been a hundred years earlier and valued in the pennies an acre. Attorneys and consultants took huge percentages of the settlements.

Borrowing $20 for stamps, I mailed a four-page letter to all our villages in the Northwest part of Alaska and that letter precipitated the organization of the Northwest Alaska Native Association (precursor to NANA Regional Corporation), and we filed a 30-million-acre claim in June of 1966 which the Bureau of Land Management accepted and gave it the number F-035294.

Alaska is massive, and its 200 villages and myriad languages and cultures made it difficult to have a common strategy. It was also becoming clearer that the state and federal government did not anticipate the indigenous "uprising" that emerged over their deal to take Native lands in the 1959 Statehood Act. But in scattered locations across the state, village leaders began to realize the encroachment on their lands as the new state began its process of trying to turn indigenous lands into state and private wealth to fund the fledgling government and its struggling economy.

There were individual recognized tribes under the Indian Reorganization Act of 1936 and a couple of regional entities (the Alaska Native Brotherhood and the Tanana Chiefs Conference) but no statewide entity. It was becoming clear that while each cultural group would have preferred to negotiate with the governments themselves, Alaska was being viewed as one large Gordian Knot of a problem – not easily resolved by negotiating with 200 villages.

In the fall of 1966, Emil Notti, President of the Cook Inlet Native Association, invited a small number of leaders from across the state to come to Anchorage to discuss land rights and other common issues in education, housing, and jobs. Because of pressures that were being felt by the state land selections, over 200 people appeared. I was selected to chair the Land Committee (Charlie Etuk Edwardson of Barrow had made many copies of my research paper and distributed it to the attendees).

This was the first-ever statewide meeting of Alaska Natives in our 10,000-year history, and it occurred just before the election for Governor in early November. Candidates were falling all over themselves to get attention. Robert Atwood, the Publisher of the Anchorage Times, who was supporting businessman Walter J. Hickel, splashed a giant headline that read "Hickel Promises Native Department" to try to peel off village votes from the Democratic candidate Bill Egan.

My committee and the convention adopted our first bargaining position: All lands that have been already taken will be determined by the Court of Claims, paid for, and the balance of the land should be deeded back to the indigenous Alaskans who still occupied those lands.

We knew that was an impossible request but that was our starting position in the land war that was to continue for five years from 1966 to 1971.