Fireweed Zinc is pushing the Boundary 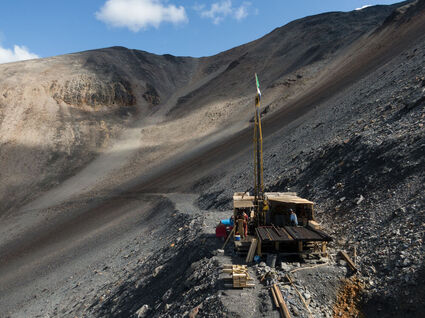 Drill pad testing on one of the many slopes of Macmillan Pass.

Boundary, a zone about 15 road-kilometers (nine miles) west of Jason that shows the potential to expand these resources, was the main focus of Fireweed's 2020 drilling.

At the beginning of 2021, the company reported a long intercept of strong zinc and silver mineralization in the discovery hole at Boundary West, which immediately became the focus of last year's drill program.

The assay results from the discovery hole at Boundary West, NB20-004, cut 76.7 meters averaging 4.22% zinc, 0.34% lead, and 25.6 g/t silver. This anomaly extends roughly 800 meters west from the higher-grade core of Boundary into an area of no outcrop that had not been previously drilled.

Fireweed stated the upper contact of this new zone of mineralization in NB21-001 is marked by a fault, which is consistent with a thicker and more complete intersection of this zone cut with hole NB21-002. 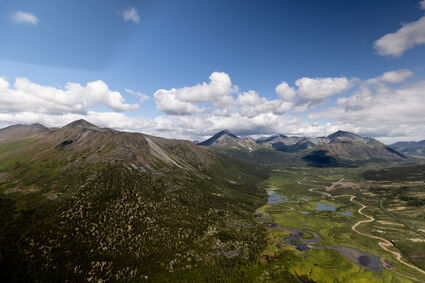 View of the Tom deposit area with the camp in the valley, and the airstrip in the foreground.

In September, the company had completed 3,850 meters of drilling in 13 holes at Macmillan Pass, which wrapped up the drilling portion of the 2021 program.

"A very successful 2021 drill program is now wrapped up after hitting mineralization in each of the 10 holes drilled at Boundary Zone and we eagerly await the assay results from the remaining holes," said Macdonald.