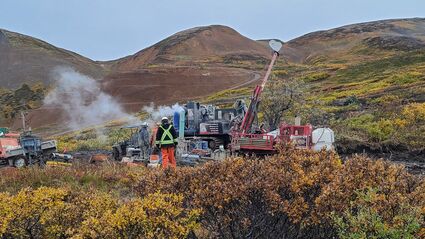 Drilling the 20th hole of 2021 season, and the 10th for the Mayflower Extension Zone at Golden Zone.

Avidian kicked off 2021 with results from its 2020 drill program at Amanita, which lies next to Kinross Gold's Fort Knox Mine property.

Avidian stated the mineralization encountered in this hole was worth following up on, encouraging the company to initiate the permitting process for the 2021 drill program at Amanita.

The company stated the mineralization appears to represent a second major mineralized trend parallel to the mineralization tested in AM20-02, which lies about 135 meters to the west. These apparent parallel zones trend to the northeast, remain open along strike and down-dip.

"Given the strong assay results and broad intercept widths encountered, Avidian is pleased to announce it plans a follow-up infill drilling program in the area along strike of the high-grade trend identified by hole AM20-02 and Trench D-West, as well as further outline drilling of the other mineralized trends," said Avidian Gold President Steve Roebuck in early 2021.

As for Amanita NE, an early-stage exploration property near the Gil-Sourdough deposit now being mined by Kinross, Avidian has undergone lidar and drone magnetic surveys to upgrade the existing dataset of the project.

Regardless of the initial momentum at Amanita, the majority of Avidian's 2021 program targeted expansion areas at Golden Zone.

This property in Southcentral Alaska hosts several precious and base metal targets along a roughly 12-mile (19 kilometers) trend. Breccia Pipe, the most advanced of these, is a deposit with 4.19 metric tons of indicated resource averaging 1.99 g/t (267,400 ounces) gold and 10.38 g/t (1.4 oz) silver.

Exploration at Golden Zone began with detailed field mapping, prospecting, and sampling on select locations to follow up on a 2019 reconnaissance mapping and sampling initiative that yielded highly anomalous gold and copper results.

This included the JJ-J4 and MJ discovery areas, where grab samples with up to 5.17 g/t gold and 4.2 g/t gold plus 2.77% copper were collected; and the Silver Kitty discovery, where one grab sample was collected with 12.5 g/t gold. 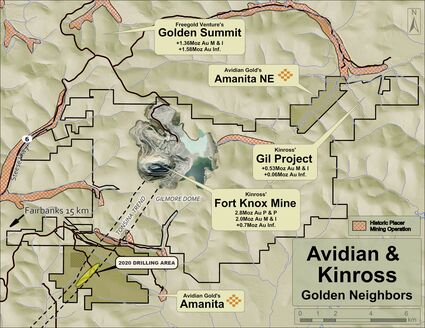 The primary objective of the drill program for Golden Zone was to follow up on an area known as the Mayflower Extension Zone (MEZ), just off to the northeast of Breccia Pipe, and is believed to have the highest potential for added ounces to the deposit.

Avidian ended its season at Golden Zone in mid-October, stating it had extended the MEZ strike length by another 200 meters. This was included in 3,288 meters of RC drilling in 27 holes testing MEZ, as well as Copper King and Long Creek, two additional targets found at the southern end of the project.

The 2021 program also entailed a 1,200-line-kilometer high-resolution drone airborne magnetometer survey over key portions of the property that were not covered by a 588.7-line-kilometer drone-mag survey flown in 2020.