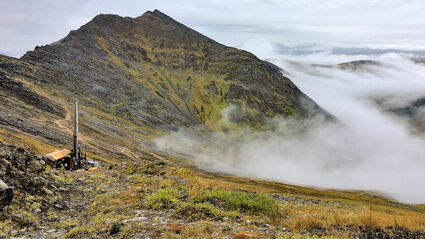 When Australia-based South32 Ltd. decided to expand its portfolio into the Northern Hemisphere, Alaska was its first stop. Under a deal struck with Trilogy Metals Inc. in 2017, the major agreed to invest more than US$175 million to earn a 50% joint venture interest in the massive Upper Kobuk Mineral Projects in Alaska's world-class Ambler Mining District.

After investing more than US$30 million to fully understand the mineral potential at UKMP, South32 agreed to pay US$145 million to exercise its option late in 2019. Ambler Metals LLC, the resultant JV owned equally by South32 and Trilogy, is using these funds to unlock UKMP's world-class potential.

Toward this goal, Ambler Metals had originally planned to invest US$22.8 million toward advancing exploration and predevelopment activities at UKMP during 2020. The partnership, however, determined that it would be best for its long-term plans to wait out the COVID pandemic.

To help to get the overall UKMP project back on schedule, South32 and Trilogy budgeted US$27 million for 2021. This program, however, was beset with its own challenges related to weather and a shortage of manpower.

Realizing it was not going to get as much drilling done as hoped, Ambler Metals prioritized mission-critical metallurgical, geotechnical, and condemnation drilling required for permitting and engineering work for Arctic, the first mine to be developed at UKMP.

A 2020 feasibility study details a financially robust operation at Arctic that would produce 1.9 billion pounds of copper, 2.3 billion lb of zinc, 388 million lb of lead, 386,000 ounces of gold, and 40.6 million oz of silver over an initial 12-year mine life.

By the end of August, crews had wrapped up drilling at Arctic with 4,129 meters of core drilling in 18 holes.

In addition to the work at Arctic, Ambler Metals had originally planned to carry out 7,000 meters of exploration drilling at copper-rich satellite targets around Arctic; similar VMS targets across the wider Ambler Belt; and carbonate-hosted deposits in the Cosmos Hills and the Ambler Lowlands.

While unable to complete the entire program, South32 and Trilogy kept the UKMP camp open as long as weather allowed.

In response to the slower drilling this season, the UKMP partners redeployed some of the geological staff to focus on regional mapping and soil sampling around satellite deposits near Arctic and at Bornite, which is about 16 miles (26 kilometers) southwest of Arctic.

Likely the second mine to be developed at UKMP, Bornite hosts 6.4 billion lb of copper and 77 million lb of cobalt in near-surface and underground deposits.

Ambler Metals also invested US$6.5 million into feasibility and permitting activities for a 211-mile industrial access road to the district during 2021. Alaska Industrial Development and Export Authority, which is expected to build the Ambler Road, also contributed US$6.5 million toward the 2021 activities. AIDEA will recoup its investments into the road by collecting tolls for its use.

In addition to being vital to UKMP, the Ambler Road also makes other mineral projects in the area more compelling, such as the enormous Roosevelt project being explored by South32. While little information is available on South32's exploration at Roosevelt, this 50-mile-long land package covers the same belt of rocks that hosts Arctic and other VMS targets at UKMP about 50 miles to the east.

Under a 2019 deal with Freegold, South32 has the option to earn a 70% interest in Shorty Creek for US$30 million, less any money the Australia-based major invests in exploring the property.

To keep the option in good standing, South32 agreed to fund up to US$10.3 million on exploration over a four-year span beginning in 2019.

The Australia major invested the first US$2.3 million into a 2019 program at Shorty Creek, which included a five-hole drill program; induced polarization and magnetic surveys; and geochemical sampling.

While drills did not turn at Shorty Creek during 2020, several prospective target areas were identified that were tested with a roughly 3,400-meter drill program carried out in 2021.