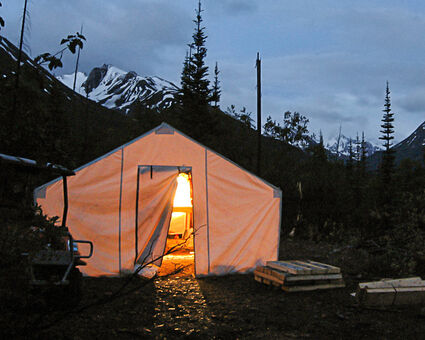 A core logging tent during the 2008 program at the Schaft Creek porphyry copper-gold project in BC's Golden Triangle.

While much of Teck Resources Ltd.'s investment and focus during 2021 was on the implementation of its long-term sustainability strategy, the British Columbia-based miner continued to carry out exploration behind the scenes.

In Alaska, Teck operates the Red Dog zinc mine on lands owned by NANA Corp., the Alaska Native Claims Settlement Act (ANCSA) regional corporation for the Northwest Arctic region where the world-class operation is located.

This operation, which produces more than 1 billion pounds of zinc and 200 million lb of lead annually, has enough ore in reserves to continue providing the world with roughly 5% of its zinc demands until 2032.

Seeking to extend this world-class zinc mine deeper into the 21st century, Teck is exploring other deposits in the larger Red Dog District.

Aktigiruq and Anarraaq, deposits on adjacent state land about five miles (eight kilometers) northwest of the Red Dog mill, are a likely source of this future ore.

Among the largest undeveloped zinc deposits on Earth, Aktigiruq has the potential to deliver ore to the Red Dog mill for 25 to 50 years beyond 2031, at current production rates.

While an industry-compliant resource has yet to be published, Teck has previously reported that Aktigiruq hosts 80 to 150 metric tons of material averaging 16 to 18% combined zinc and lead.

According to the most recent calculation, Anarraaq hosts 19.4 million metric tons of inferred resource averaging 14.4% zinc and 4.2% lead.

In addition to Anarraaq and Aktigiruq, Teck is exploring the Lik zinc project on state land about 14 miles northwest of Red Dog under a 50-50 partnership with Solitario Zinc Corp.

Teck was the operator of a jointly funded 2021 program at Lik that included sampling, geophysics, and drilling to test new exploration concepts and expand resources.

Galore Creek Mining Company, a joint venture owned equally by Teck and Newmont Corp., is carrying out drilling and studies needed to get started on a prefeasibility study for developing a mine at this world-class deposit.

While the PFS was slated to get underway in 2020, the Galore Creek JV deferred this work due to global economic uncertainties posed by COVID-19 and fieldwork has been minimal over the previous two years.

Copper Fox Metals Inc., which owns the remaining 25% interest in Schaft Creek Joint Venture, had a preliminary economic assessment prepared during 2021 that evaluates a 133,000-metric-ton-per-day mill and open-pit mining operation at Schaft Creek. 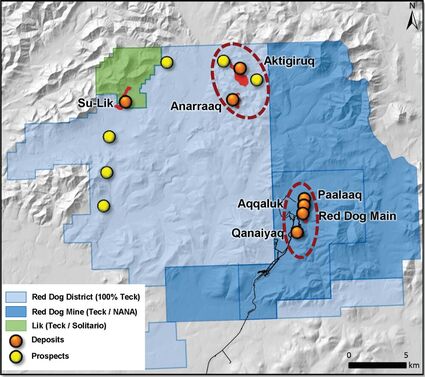 During 2021, the Schaft Creek JV completed 835 meters of drilling to provide samples for metallurgical testing on material to be mined within the early part of the operation outlined by the PEA.