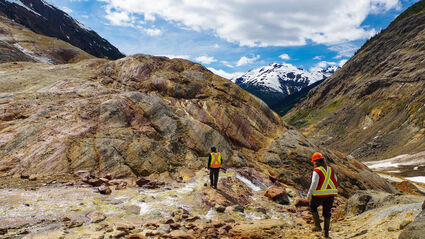 After adding 25.9 million ounces of gold to its already world-class KSM project in British Columbia's Golden Triangle at the close of 2020, Seabridge Gold Inc. focused most of its 2021 exploration on bringing this new resource into the mine plan and discovering another KSM-like deposit on the nearby Iskut property.

The massive expansion of resources is the result of an agreement to acquire the Snowfield property on the east border of the KSM property from Pretium Resources Inc. for US$100 million, plus a US$20 million payment contingent on commercial production from Snowfield or a bankable feasibility study for the property.

World-class in its own right, the Snowfield resource is only about half the size of KSM.

A 2016 prefeasibility study detailed a mine for KSM that would produce an average of 540,000 oz gold, 156 million lb copper, 2.2 million oz silver, and 1.2 million lb molybdenum annually over a 53-year mine life.

A 9,450-meter drill program carried out this year at KSM included 3,484 meters of drilling to confirm model grades and carry out metallurgical testing in preparation for an updated KSM-Snowfield prefeasibility study slated for completion by mid-year.

"We foresee a seamless integration of Snowfield into KSM by blending Snowfield ore with Mitchell production, resulting in a meaningful extension of open pit mining prior to any underground block-cave mining," said Seabridge Gold Chairman and CEO Rudi Fronk.

The 2021 KSM drilling also included geotechnical drilling at Snowfield and along the planned Mitchell-Treaty tunnel (MTT), which would be used to deliver ore to the KSM mill.

Seabridge also continued exploration at Iskut, a property about 30 kilometers (19 miles) northwest of KSM that is home to the historical high-grade Johnny Mountain gold-silver-copper mine.

The company says its intensive use of geophysical tools, mapping, sampling, and preliminary drilling indicates the potential for a large gold-copper porphyry system below the Quartz Rise lithocap southeast of Johnny Mountain.

An 11-hole drill program carried out in 2020 to test geophysical anomalies below the Quartz Rise lithocap tapped mineralization consistent with the alteration halo of such a large porphyry system. 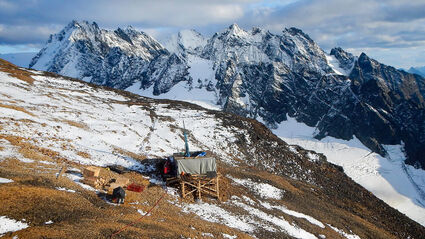 Since acquiring Iskut, Seabridge has collected evidence of a large gold-copper porphyry system below the drilling completed at this Northern BC property prior to 2021.

This includes mineralized intervals of up to 158 meters averaging 0.16 g/t gold and 0.16% copper, indicating that drilling to date is in the outer portions of the porphyry system, along with shorter sections of higher-grade mineralization, including 31.8 meters averaging 0.62% copper.

Continuing a methodical approach to finding a large KSM-like porphyry deposit at the structurally complex Iskut property, Seabridge started its 2021 program with a magnetotelluric geophysical survey followed by two deeper drill holes to test for evidence of the source of the gold and copper enriched intrusions previously encountered at Quartz Rise.

In addition to KSM, Snowfield, and Iskut, Seabridge's portfolio includes 3 Aces, a high-grade orogenic gold project in southeastern Yukon; Courageous Lake, a project in Northwest Territories with 7.97 million oz of gold in measured and indicated resources averaging 2.3 g/t gold; and Snowstorm, a Nevada property with the potential to host a large, high-grade gold deposit.