Tectonic builds upon success at Tibbs 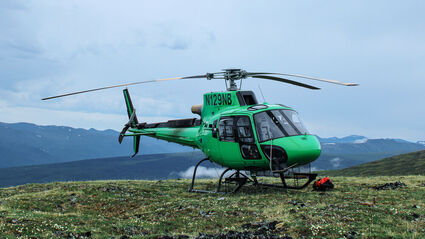 A four-week mapping and prospecting campaign carried out at Tibbs South identified intriguing gold mineralization at Jorts and Jeans Ridge that was tested with drilling toward the end of the 2021 season.

Building upon the success from systematic exploration carried out over the previous two seasons, Tectonic Metals Inc. focused its 2021 program on testing high-grade and bulk tonnage gold targets on its Tibbs properties in Interior Alaska.

Located in the Goodpaster Mining District, Tibbs is known for high-grade gold targets reminiscent of the ore at Northern Star Resources Ltd.'s Pogo gold mine about 22 miles (35 kilometers) to the northwest.

During its initial drilling at Tibbs in 2019, Tectonic cut 29 meters averaging 6.03 grams per metric ton gold at Michigan, a previously identified but underexplored zone.

The remaining 16 holes of the 2020 Tibbs drill program focused on Lower Trench and Wolverine, zones along a 3,000-meter prospective corridor that also encompasses Michigan.

One 2020 hole drilled at Lower Trench cut 7.6 meters averaging 4.5 g/t gold in mineralization identical to Michigan but 1,500 meters to the northwest.

Tectonic kicked off its 2021 drilling at Tibbs with oriented core drilling at Michigan and Gray Lead, a high-grade vertical vein about 3,000 meters southwest of Michigan where historical drilling cut 5.7 meters of 19.14 g/t gold.

While drills were carrying out phase-one drilling, crews were refining targets for a second phase of 2021 drilling.

This work included geophysical survey lines that extend from the intrusive rocks that host known high-grade gold zones at Tibbs into the gneiss rocks to the west, where 2020 mapping identified low-angle faults within moderately dipping gneissic rocks, key characteristics of the Pogo geological model.

Soil sampling over these gneissic rocks outlined multiple gold-in-soil anomalies with Pogo-like geochemistry, and one rock collected from the Lower Trench prospect during 2021 contained 190.4 g/t ton gold, the first evidence of Pogo-style vein mineralization in the gneissic terrain at Tibbs.

This work identified six previously undrilled Pogo-like targets that were tested with 23 holes during the second phase of the 2021 program at Tibbs.

The newest addition is Flat, a property leased from Doyon in September.

Located in the Kuskokwim Mineral Belt about 25 miles (40 kilometers) north of the 39-million-ounce Donlin Gold project, Flat hosts intrusive-hosted, sheeted quartz vein gold mineralization above two creeks – Flat and Otter – that are estimated to have produced more than 830,000 oz of placer gold since 1908. When you add in other streams draining Chicken Mountain on the property, this total is more than 1.3 million oz of alluvial gold.

"The acquisition of Flat provides Tectonic with access to one of the most exciting gold exploration opportunities in Alaska," said Tectonic Metals President and CEO Tony Reda. 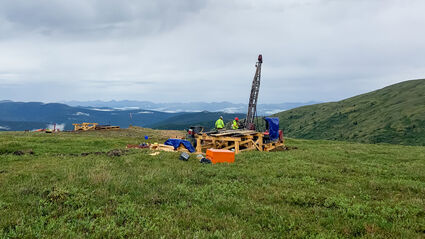 Completed in June, this second hole of the initial phase of 2021 drilling at Tibbs cut three mineralized intercepts in the Michigan zone, including five meters averaging 1.81 g/t gold.

Tectonic carried out early-stage exploration at Seventymile during the 2018 and 2019 field seasons in preparation for a 2020 RAB drill program that targets six highly prospective gold targets along the 8,000-meter-long Flume trend.

Tectonic says its exploration at Seventymile has both validated and proven continuity of the mineralized structures across the Flume trend.

Based on the exciting results at Tibbs and Tibbs South, however, Tectonic postponed its planned 2021 drilling at Seventymile until next season.

Instead, a reverse circulation rig slated for Seventymile was redirected to complete roughly 1,200 meters of drilling at the Jorts and Jeans targets and then Pogo-like structures in the western portion of Tibbs.