Imagine a jigsaw puzzle without edges

Among the curiosities of the world, one that stands out is the willingness of people to defend a position to their dying breath North of 60 Mining News – February 4, 2022 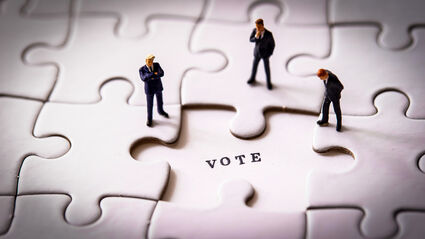 In today's topsy-turvy world, perhaps the question we all should be asking is, in the unforgettable opening words of Admiral James Stockdale during the 1992 Vice Presidential debate, "Who am I, why am I here?".

Admiral Stockdale was the person chosen to be Independent Ross Perot's Presidential running mate. His challengers were then-President George Bush and then Arkansas Governor Bill Clinton. Perot garnered about 19.7 million votes, many of which might have gone to President Bush. President Bush received just over 39 million votes and Governor Clinton scored almost 45 million votes.

Following the election, Governor Clinton was able to claim 370 electoral votes, President Bush got the remainder, and Ross Perot got none.

In the good old days, in order to become President, all one needed was for the opposition to split the totals. If recollection serves, not a whole lot of people were screaming or even mumbling about Mr. Clinton having stolen the election.

But, if the past is just a prelude, we may be on the ragged edge of a Presidential election in just two years wherein what I would call the Umbrella Republicans – conservatives who hide under any available cover to avoid the detritus of the Trump administration – will replay 1992.

Granted that President Biden lacks the charisma of Bill Clinton and potential candidate Donald Trump lacks the polish and finesse of George Bush, it is foreseeable that a third party of disenchanted Republicans will emerge to spoil the race.

Perhaps it is only magic mushrooms on my part, but in my view the parochial political diversity – some would call it "partisan divisions" – we are experiencing nationally and in Alaska can only be resolved by a ménage à trois.

The bad news, however, is that probably means Mr. Biden will be a two-term President.

Bringing it down to cases, how will that bell ring in Alaska? Already, we have a President who in his first year demonstrated that Alaska should be nothing other than a playground for the rich and famous.

No matter where you look, whether it is with regard to Pebble or the Tongass, digging a hole in the ground or cutting a tree is to be verboten.

Although it is a great honor to have a Secretary of the Interior who is of Native American descent, she seems to doubt that the Alaska Native Land Claims Settlement Act settled Alaska Native land claims.

The never-ending dispute about what constitutes "waters of the United States" (WOTUS) continues to rear its ugly head. Like Hydra, when you cut off one serpent's head, two more grow in its place.

Some will recall in the 2012 Sackett case the U.S. Supreme Court held that an aggrieved permit applicant didn't have to wait forever for the Environmental Protection Agency to issue a permit. The Sacketts are now back before the Court asking that a concurring opinion by the late Justice Antonin Scalia limiting the reach of the Army Corps of Engineers with regard to WOTUS jurisdiction be embraced. Even if successful, however, it will probably be a matter of whack, whack – and four heads grow back.

Alaska was built on resource development. The American Environmental Industry, however, is committed to compelling resource development take place in countries other than the United States, such as Congo or New Caledonia. That does not well serve Alaska's needs, nor the needs of anyone who seeks a better world.

It boggles – or should I say "Wordles" – the mind to think about how the folks who want to consume our resources and the folks who want to produce our resources, cannot find a common ground. Having said that, however, we are far short of unanimity, statewide or nationwide. In western Alaska, where the fish swim past the mines, the fisherfolk are pushing to have mining banned. Everyone, of course, has a handout to collect a Permanent Fund Dividend, but no one seems to understand that "Green Energy" will not fertilize the Permanent Fund.

Admiral ST, with all due respect, had it wrong. His question should have been, "who are you, why are you here?" It seems to me that in many cases, those Alaskans who are not able to claim a vocation in the resource development industry, either directly or by extension, would have a very hard time answering that question.

Even state and federal government workers, other than most military and support personnel, frequently derive some benefit or bear some relationship to resource development.

Science is fine, regulation is fine, conducting business using the best science practicable is fine; however, it is not fine when opponents to any business, whether it be mining or selling mukluks, try to force entrepreneurs out of business arbitrarily.