With implications for mining on the remote Nunavut property Mining Explorers 2022 - January 19, 2023 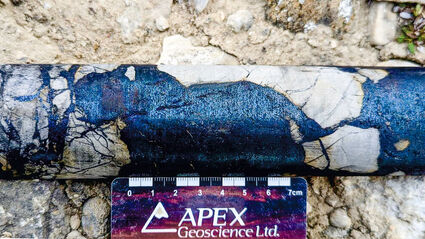 American West Metals Ltd. capped its first season of exploration drilling in Nunavut with the discovery of substantial copper mineralization at depth at Storm Copper, a development that the explorer believes will be a "game-changer" for the early-stage project.

Initial assays from drill hole ST22-10 confirm the presence of sediment-hosted copper and zinc sulfide mineralization that indicates the potential for a major mineralized system lying below the very high-grade copper found at surface at Storm.

"The importance of this discovery for the project cannot be overstated, as it has hugely positive implications for the copper endowment within the project area," said American West Metals Managing Director Dave O'Neill, one of two mining industry veterans who heads the Australia-based company.

"Exploration drilling has intersected stratiform copper sulphide mineralization at depth, which supports our geological assumptions that there is a major copper system lying below the high-grade, near-surface mineralization," O'Neill added.

Unlike the near-surface, high-grade copper deposits that American West discovered on Storm in 2021 and early 2022, this deeper sedimentary copper mineralization is a style typically associated with very large deposits, such as those found in the Congo and the Kupferschiefer deposits in Central Europe.

O'Neill said the deeper copper discovery drill hole at Storm is associated with a series of large induced polarization, electromagnetic, and gravity geophysical anomalies that sit below or adjacent to the known high-grade copper prospects and major faults that extend more than five kilometers (three miles).

Storm is best known for the near-surface high-grade copper discovered there. Highlights from drilling at Storm include:

Seal, which lies about 20 kilometers (12.5 miles) northwest of Storm, is a stratabound zinc deposit open in all directions.

Highlights from previous drilling at Seal include:

The larger Storm property also hosts many underexplored targets within its mineralized trend, including the Tornado copper prospect, where 10 grab samples yielded up to 32% copper in gossans.

American West took an earn-in option in 2021 to acquire 80% ownership of this large and highly prospective land package from Aston Bay Holdings Ltd.

The company, which went public shortly before entering the deal with Aston Bay, agreed to spend a minimum of C$10 million on exploration at the Storm property and nearby prospects over a period of up to nine years, including not less than C$2 million in spending during the first two consecutive field seasons.

During its first field season in Nunavut in 2021, American West extracted and tested copper ore from an area of high-grade mineralization at Storm

The DSO material, primarily chalcocite, has no impurities and could potentially form the basis for a low-footprint and low-capital development option, according to the explorer.

The copper-rich DSO product at Storm is the result of "an uncomplicated and low-cost process that plays to American West's strategy of developing very low footprint operations."

This simple process involves the use of an ore sorter to upgrade the ore.

The company sent a 5.5-kilogram (12 lb) sample of material from previous drilling to Australia to be tested with a Steinert ore sorter.

"The process of generating DSO at Storm is amazingly simple and highlights our company's focus on generating ESG sensitive mining solutions. Storm Copper now stands out as one of the very few, and highest-grade DSO copper projects globally," O'Neill said in early 2022.

The hypogene copper mineralization is present at surface and is identified on the property to a depth of at least 100 meters in the form of chalcocite, bornite, covellite and chalcopyrite.

The new intersections include: 19 meters averaging 2.08% copper from 58 meters downhole, including two meters grading 15.98% copper from a depth of 70 meters.

The exploration also confirmed a high volume of near-surface high-grade copper at the 2750N Zone, with mineralization open to the west along 1,000 meters of prospective strike length. 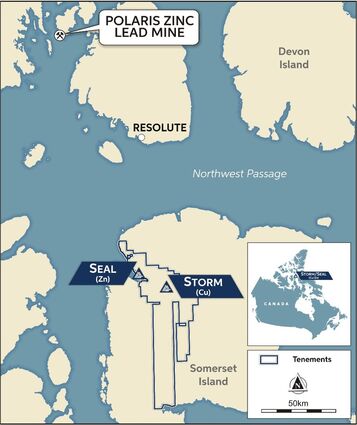 Very limited drilling, so far, at depth and beyond the known 2,500-meter strike of copper mineralization at Storm also suggests excellent potential to establish an increased scale to the project's mineralized footprint, the company added.

Additional copper prospects along strike include the Tornado, Blizzard, and Hurricane targets, which are defined by copper and zinc geochemical anomalies.

Some targets also have been generated by geophysical surveys. Exploration at Storm, so far, has shown a clear geophysical response of copper mineralization in electromagnetic and gravity data.